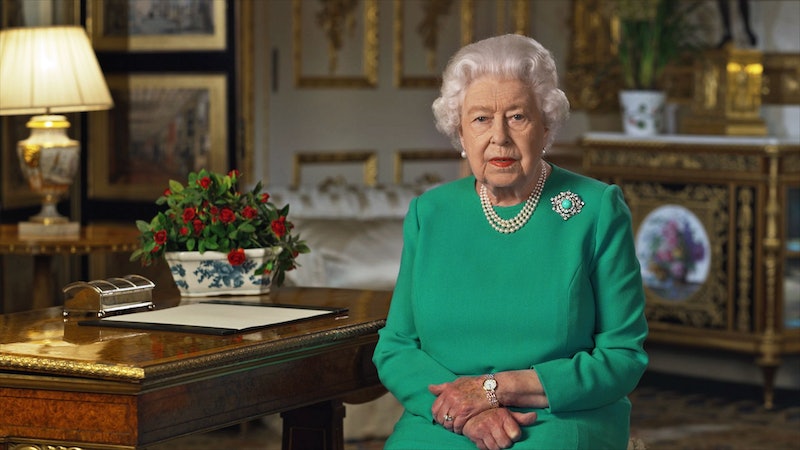 Queen Elizabeth made history again last night with a rare televised address, watched by 24 million viewers. “We will meet again,” she said, referencing Dame Vera Lynn's bolstering war anthem “We'll Meet Again.” But on the whole, her speech was not of fighting or struggle, but of perseverance and “good-humoured resolve,” a sentiment that was echoed in her optimistic ensemble.

The monarch’s penchant for sending hidden messages with her sartorial choices is well documented. In her memoir, The Other Side of the Coin, the Queen's stylist Angela Kelly explained that the Queen's outfits are planned months in advance. While this look wouldn’t have been planned months in advance, we can be sure that plenty of thought would have gone into it. This was only the fifth time the Queen has given such a speech in her 68-year reign.

Speaking from Windsor Castle, the Queen wore a green dress and a very historic brooch. Royal watchers immediately drew parallels to the emerald green look that Meghan Markle wore for her final royal appearance last month. “I think the green is in the same spirit as Meghan’s choice,” notes royal style watcher Elizabeth Holmes via her Instagram account, “symbolising spring, growth, renewal, a fresh start.” Holmes rightly points out that “what’s happening globally right now is so much bigger than what’s happened in the royal family in recent months,” though. Others, including Town & Country, said the look paid tribute to the NHS employees she thanked during her speech.

Finishing off her green ensemble, the monarch chose her signature pearl earrings, three-strand pearl necklace, and a turquoise brooch. The earrings and necklace are neither new nor flashy; instead they represent tradition and very much echo the themes addressed in the Queen’s speech, namely of tradition, resolve and “fellow-feeling,” as she put it.

The brooch was part of Queen Mary’s vast collection, having been given it as a wedding gift. When she passed away in 1953, she gifted it to her granddaughter, now Queen Elizabeth II, who first wore it publicly in 2014 and has been in a fairly regular rotation since. Turquoise, notes Town & Country editor in chief Stellene Volandes, “is thought to offer love and protection, and to enhance the powers of leadership.” Appropriate, given the circumstances.

The lack of family portraits in the address was also significant. Instead of the usual selection of pictures and portraits, she sat by an empty desk, with just a pop of colour from fresh flowers nearby. Windsor Castle’s White Drawing Room was reportedly chosen as the location for filming as it would “allow a safe distance to be kept between the monarch and her camera operator,” reports The Express. “The lone cameraman was dressed from head to toe in the same type of protective equipment which doctors and nurses have been wearing to treat infected patients.”

In her speech, the Queen drew from her own experiences, recalling a her address from World War II (also made from Windsor), and thanked people for following government rules to stay at home, while praising those "coming together to help others."