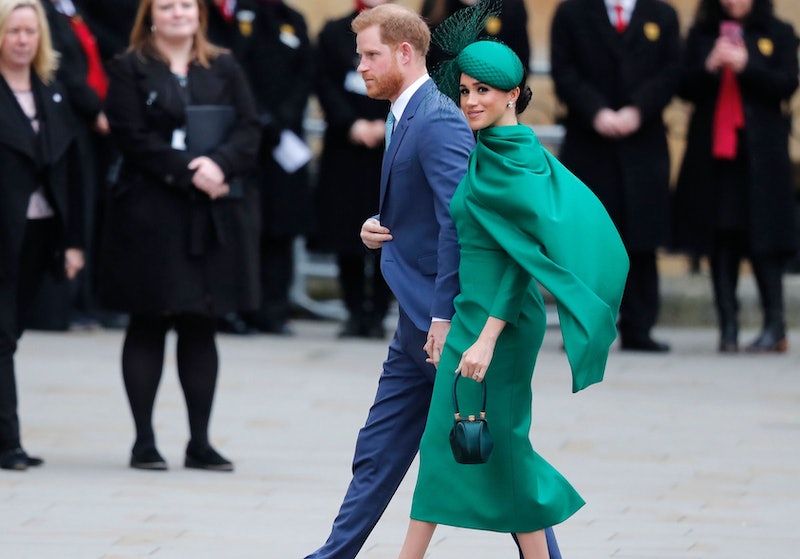 The Duke and Duchess of Sussex have attended their last public engagement at the annual Commonwealth Day Service held at Westminster Abbey. On Monday March 9, Meghan and Harry arrived looking relaxed, holding hands. Meghan's sweeping green cape dress, designed by Emilia Wickstead, was finished off with a showstopping William Chambers hat. Harry sent his own sartorial message, matching his jacket's lining with his wife's emerald ensemble. Coincidence? I think not.

Thousands gathered to witness the couple make their final appearance as royals before they embark on a new life in Canada on March 31. The service concludes a busy return to the UK for the couple, after attending a military music festival on March 7, at which they received a standing ovation, along with a surprise visit from Meghan to a school in Dagenham. The former Suits star showcased a range of stunning looks during her last run as a senior royal, including a bold blue sheath dress by Victoria Beckham worn at the Endeavour Fund Awards March 5, a floor-length red cape gown at the Royal Albert Hall, and even a sheer Topshop number.

The Commonwealth, established in 1926, is an association of 54 independent countries that cooperate to develop the economic, cultural, and political structures of its societies. Monday's service, which takes places every year, celebrates the organisation, bringing together all faiths and cultures. This year's lineup featured Anthony Joshua as a speaker and performances by Alexandra Burke and Craig David, among others.

Stepping down as a royal member means Harry will have to give up his role as Commonwealth youth ambassador, despite stating his urge to make the Commonwealth his priority before his wedding back in 2018: "Both of us have passions for wanting to make change, change for good, and with lots of young people running around the Commonwealth, that's where we're going to spend most of our time hopefully." Luckily for Harry, he and Meghan will remain president and vice president of the Commonwealth Trust so their involvement in the organisation shouldn't change too drastically once they move.

Unlike last year in 2019, Harry and Meghan did not participate in a procession with the royal family into the Abbey due to last-minute changes, confirmed by Kensington Palace. Instead, the pair sat second row behind the Queen and Prince William and Kate, Duke and Duchess of Cambridge. (The Cambridges also did not participate the royal procession.) Kate wore a Sally Ann Provan hat and cinched red coat dress by Catherine Walker; the same one she wore on Christmas Day 2018.

More like this
Kate Middleton Wore The Ultimate '90s Power Suit
By Sam Ramsden
Eurovision Has Been Given A Whole New Look Ahead Of Its Liverpool Debut
By Bustle UK
This Is When Netflix Is Going To Start Charging You For Sharing Passwords
By Darshita Goyal
Prince Harry Incorrectly Recites Christina Aguilera’s “Genie In A Bottle” Lyrics
By Jake Viswanath
Get The Very Best Of Bustle/UK
Sign up for Bustle UK's twice-weekly newsletter, featuring the latest must-watch TV, moving personal stories, and expert advice on the hottest viral buys.