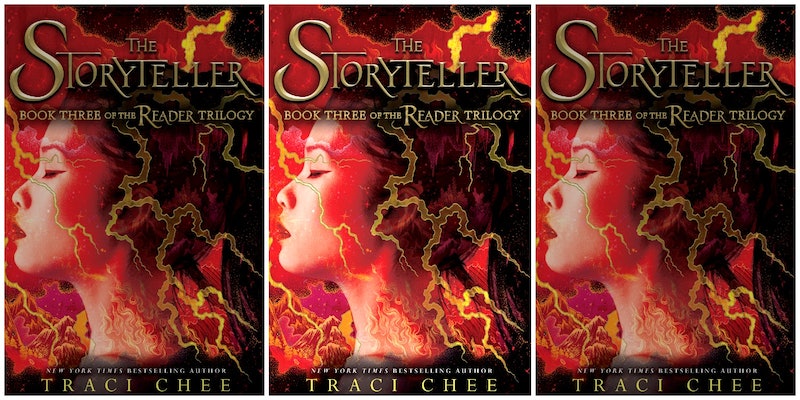 Traci Chee's epic YA fantasy trilogy — which began with The Reader and continued with The Speaker — will come to an end on Nov. 13, 2018 with the release of The Storyteller. To recap: the series follows Sefia, who was forced to live life on the run after her father was brutally murdered. She and her aunt Nin managed to survive in the wilderness together, forever looking over their shoulders for new threats. But when Nin was kidnapped, Sefia was suddenly on her own. Her only clue was a strange rectangular object that once belonged to her father left behind — something she comes to realize is a book. And what that book reveals changed Sefia's life forever.

Now after two books' worth of revelations, battles, nightmares and romance, Sefia is determined to rid herself and the boy she loves from the clutches of the evil Guard and escape The Book's prophecy. But none of that will be easy. After all, what is written always comes to pass. As Sefia and Archer watch the world of Kelanna start to crumble to the Guard's will, they will have to choose between preserving their love and joining a war that just might tear them apart.

Now, November might seem like a long time to wait, but you're in luck. Because Bustle has the cover reveal and an exclusive excerpt from the book to tide you over until then! First up, the stunning cover.

OK, you can gawk over its beauty for a couple more seconds. Are you good? Great. Because now it's time to really get excited. Keep reading belo for Chapter 1 of The Storyteller below, and get ready to be on the edge of your seat until the exciting conclusion hits shelves on Nov. 13.

Sefia sat up in the shadows of the sick bay, startled out of some half-remembered dream.

The ship rocked and plunged beneath her, making the jars of ointment and bottles of tonic rattle on their shelves. Outside, rain spattered the portholes, blurring her view of the waves, high as rolling hills.

A storm. They must have come upon it in the night.

Sefia shivered, hugging her knees to her chest. In the four days since she’d returned to the Current with Archer, she’d had the same dream again and again. She was back in the house on the hill, and ink was seeping — no, flooding — from the secret room in the basement where her parents had kept the Book, the dark waves reaching across the floor to grasp them by the ankles and crawl up their calves. In the dream, Lon and Mareah scooped her up. In the dream, they shoved her out the door. But they were always too slow to save themselves, always too slow to escape the growing pool of ink that drew them, screaming, into its black depths.

Destiny. Her parents had been destined to die, their futures recorded in the Book with everything that had ever been or would ever be, from the flicker of a mayfly’s wings to the life spans of the stars overhead.

Somewhere in the Book was the passage where her mother got sick.

Somewhere were the paragraphs that described her father being tortured.

It had been written, so it had come to pass.

"Destiny. Her parents had been destined to die, their futures recorded in the Book with everything that had ever been or would ever be, from the flicker of a mayfly’s wings to the life spans of the stars overhead."

But they’d fought it. They’d betrayed the Guard, the secret society of readers to which they’d sworn their undying allegiance. They’d stolen the Book, the Guard’s most powerful weapon, to protect their daughter from her own future. They’d run.

They’d lost, in the end, but oh, how they’d fought.

As Sefia had to fight now. Fight and win, or she’d lose Archer to destiny too.

Beside her, he lay curled beneath the blankets, hair tousled, fingers twitching in his sleep. He always slept so little, his dreams haunted by memories of the people he’d killed.

Lightning forked in the distance, pulsing like veins in the restless sky.

As if in response, Archer’s body spasmed. He let out a wordless gasp.

But the moment would pass. It always did. And then —

The smile. It spread across his face like dawn racing over water — his lips, his cheeks, his golden eyes. Every time, it was like he was seeing her for the first time, his expression full of such hope that she longed to see it again and again for the rest of her days.

“Sefia,” he whispered, tucking her hair behind her ear.

She bent closer, drawn to him as a hummingbird is drawn to a flower, her mouth gently landing on his.

He leaned into her kiss, responding to her lips and wandering hands as if her very touch was magic, making him moan and arch and yearn for more.

He laced his fingers in her hair, like he needed to be closer to her, like he couldn’t get enough of her, but as he tried to sit up, he let out a sudden hiss of pain and reached for his injured side.

Her cheeks warmed as she pulled aside the blanket to examine his bandages. Doc had stitched and dressed the wound twice now: first when he’d arrived, half-conscious, with the gash below his ribs black and nauseatingly deep, and a second time when Archer had torn his sutures trying to help Cooky dump a pot of potato peels overboard. Sefia would never hear the end of it if Doc had to redo the stitches again.

“Only almost.” He shrugged. He’d told her about the fight with Serakeen. There had been the smell of cordite and blood. A gust of magic that had swept Archer’s lieutenants, Frey and Aljan, into the wall of the alley before dropping them, unconscious, onto the cobbles. The resistance of bone as Archer severed Serakeen’s hand at the wrist.

“I should’ve been there,” Sefia said, not for the first time. If she’d been there, she could have protected him. She had the same magic as Serakeen— a magic the Guard called Illumination — she might have even matched him in a fight. After all, she thought bitterly, I’m the daughter of an assassin and the most powerful sorcerer the world has seen in years.

No. She didn’t want to believe in that future. She wouldn’t become a weapon in some war for control of the Five Kingdoms. She wouldn’t lose Archer, the boy she loved.

"No. She didn’t want to believe in that future. She wouldn’t become a weapon in some war for control of the Five Kingdoms. She wouldn’t lose Archer, the boy she loved."

“You’re here now. That’s what matters,” Archer said quietly. “Without you, we wouldn’t be able to rescue Frey and Aljan.”

His bloodletters, his friends, had followed him into the fight with Serakeen, and Serakeen still had them. The Guard’s Apprentice Soldier, known to Sefia’s parents as Rajar, had once been their friend and collaborator. Together, they’d orchestrated the war that was supposed to claim Archer’s life.

How many of Lon and Mareah’s mistakes would Sefia have to fix? She’d loved them, but they’d made so many.

“Frey and Aljan will be all right,” Sefia said.

“You really think so?”

She trailed her fingers down his arm, over the fifteen burns that marked his kills in the impressors’ fighting rings, and took his hand. “Yes,” she said.

The plan was to return to the bloodletters, organize a rescue, and meet up with the Current of Faith again at Haven, an island in the unexplored reaches of the Central Sea — one of those places you could get to only if you knew how to get there. Reed had set it up months ago to take in outlaws on the run from the widening scope of the war. If Sefia and Archer got there with the bloodletters, they would all have a place to wait while the fighting — and destiny — passed them by. If they got to Haven, Archer would live.

But first, they needed the Book. Sefia couldn’t teleport to the bloodletters without a clear image of where they were, and only the Book, with its infinite pages of history, could provide that.

She’d hidden it in the safest place she could think of: the Jaharan messengers’ post. The messengers’ guild dealt in all kinds of secrets —delicate packages, incriminating information — and they never broke their trust. They were respected and powerful, and with them, no one could touch the Book.

"She’d hidden it in the safest place she could think of: the Jaharan messengers’ post. The messengers’ guild dealt in all kinds of secrets —delicate packages, incriminating information — and they never broke their trust. They were respected and powerful, and with them, no one could touch the Book."

Not even the Guard. She hoped.

Archer lifted Sefia’s hand to his lips. “What would I do without you?”

“You’ll never have to find out.” She kissed him again, and the kiss was a promise. A promise of high winds and open waters, of lying, legs tangled, on a white beach with nothing but the firmament for a coverlet, of succulent days and hot breaths and damp skin and years rich as wine and endless as the sea.