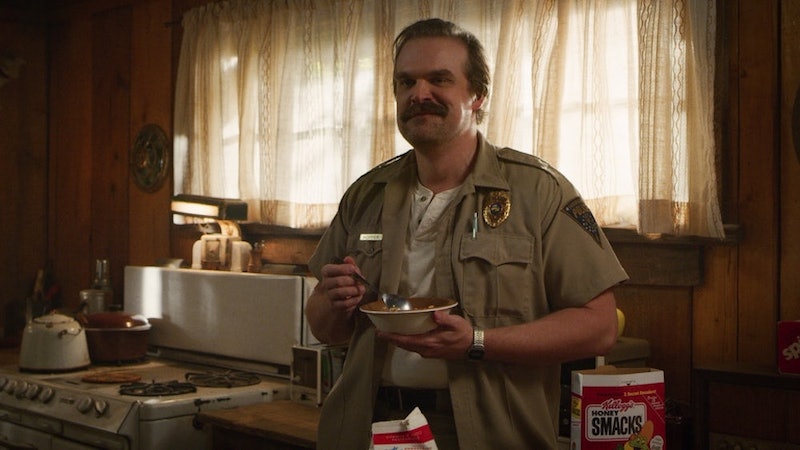 Stranger Things 3 may be over, but the Easter eggs just keep on coming. The third season of the Netflix hit series, which premiered on July 4, concluded on several sad notes: Eleven and the gang squared off against the Mind Flayer at the Starcourt mall, which resulted in the sacrifice and death of Billy. Meanwhile, Joyce, Hopper, and Murray infiltrated the underground lab to close the gate to the Upside Down, which resulted in the supposed death of Hopper. On the heels of the finale, however, several fan theories have emerged to debunk the notion that Hawkins’ beloved police chief is truly dead. Now, a new Stranger Things 4 theory about David Harbour’s Instagram may hold the key to Hopper’s fate.

Shortly after the premiere of Season 3, eagle-eyed fans noticed that the actor has been changing his Instagram profile picture to a different number daily. As BuzzFeed noted, the Harbour's Instagram profile photo has changed from 6 to 1 to 8, and then to 6. So far, these appear to be the first four digits of Murray Bauman’s home number, revealed in Season 3’s “E Pluribus Unum.” In the episode, Hopper, Joyce, and Murray successfully interrogate a Slurpee-chugging Alexei (may he rest in peace) for details about the Russians’ plans to open the gate. Shortly after, Hop places an urgent call to Dr. Owens to request backup and leaves Murray’s home number: (618) 625-8313.

Of course, devoted fans dialed the number themselves and learned that it actually connects to Hawkins’ favorite conspiracy theorist. More so, the Maurray's number contains a cryptic message that could hint at what’s to come for a potential Season 4. Murray’s number relays the following message:

“Hi. You have reached the residence of Murray Bauman. Mom, if this is you, please hang up and call me between the hours of 5 and 6 p.m., as previously discussed, OK? If this is Joyce ⁠— Joyce, thank you for calling. I have been trying to reach you. I have an update. It’s about… well, it’s probably best if we speak in person. It’s not good or bad, but it’s something.”

The message itself is pretty vague, but viewed next to Harbour's Instagram clues, and it seems pretty likely that Murray’s update is about Hop. After all, the message doesn't seem to take place during Season 3, and Harbour's connection to the number, and therefore the message, hints that Hopper is involvred somehow.

As for the update itself, fans will just have to wait until Season 4 to learn more about what Murray has uncovered. Could he have caught wind of the fact that the Russians are holding an undisclosed American hostage, as revealed in the Stranger Things 3 post-credits scene? More importantly, is the American being held hostage actually Hopper?

While it's a compelling theory, not everyone is convinced that Hawkins’ police chief is sitting in the Russian cell. Some are convinced that Dr. Martin Brenner, known as Papa to Eleven, is slated to make a return to the series, and it’ll soon be revealed that he's the American being held in Russia. After all, it’s already been established that Brenner is, in fact, alive. In turn, fans are contending that Hop — whose body is not actually seen on the platform before or after the blast (seriously, rewatch it) — made a run toward the gate to the Upside Down. This hypothesis has been fueled by fans’ “three inches” theory, rooted in Hop’s emotional quote, “Keep the door open three inches.”

So, could Murray’s update pertain to the Russian cell or the Upside Down? Will Hopper return for Season 4? Only time will tell.