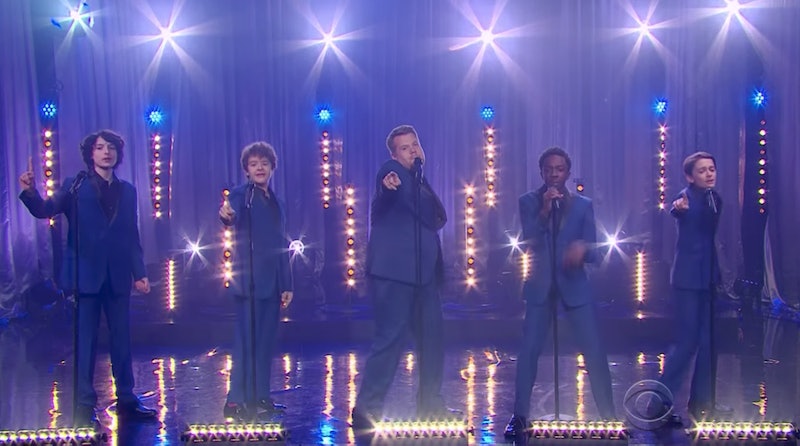 In a talk show skit of epic proportions, Late Late Show host James Corden performed a Motown parody with the Stranger Things cast that will literally make you laugh until you cry. Known for his star-studded and ridiculously entertaining Carpool Karaoke segments, which feature popular celebs jamming out to their favorite tunes, Corden recently enlisted the help of cast members from the beloved Netflix series Stranger Things for a montage of classic Motown songs such as Jackson 5’s “I Want You Back,” The Temptations’ “My Girl,” and The Four Tops’ “Reach Out I’ll Be There.”

Ditching the traditional car ride format that has become a familiar fixture throughout his late-night career, Corden's latest spoof kicked off with a hilarious backstory detailing exactly how the fictitious cover group would disband after all members of the quintet (with the exception of Corden) find success after auditioning for a Netflix series. During the sketch, it's revealed that the band was formed after the crew met in school. Finn Wolfhard hilariously explained,

“Some people thought it was weird that James hung out with us because he’s an adult, but we actually went to school with him. You know, he was held back a couple of years, but we were in the same grade."

The six-minute video will give you all the feels, taking you on a trip through songs that you can easily hum or sing along to while at the same time making you laugh uncontrollably at Corden's antics when he learns that he, quite possibly, may be the boy band's weakest link.

Actors Wolfhard, Gaten Matarazzo, Caleb McLaughlin, and Noah Schnapp were all on hand, and seemingly well prepped for the gig, which featured Corden as the fifth member of the fictitious Upside Down's cover band. It's worth noting that McLaughlin has had good practice within the boy band circuit, having appeared in BET's 2017 New Edition biopic as a young version of the popular '80s R&B group's Ricky Bell.

Following the opening sketch, the video quickly segues into a reunion of the crew following the success of Stranger Things — the series that would be the ultimate demise of the group's cover band career. Amidst their performance the guys jump right back into gear, tackling an impressive medley of vintage offerings from some of the most famous Soul and R&B groups of yesteryear.

Watching the show-stopping act, it's plain to see that the young Stranger Things actors have a myriad of talent under their belts with choreographed dance moves and remarkable vocal performances.

As for the young group's mature choice in music, Corden jumped right in to explain their joint admiration for sound is amongst many things that they share in common. He said,

"The boys and I, we have so much in common. We like playing video games; we all love taking naps. Most importantly, we all love Motown."

Corden has perfected the format of showcasing celebrities in ways that fans have never see them before, and this collaboration with the cast of one of Netflix's most phenomenal shows appears to be right on time with audiences of every age.

Although the popularity of Stranger Things shows no signs of stopping anytime soon, it seems safe to say that the cast members would have no problem breaking into other branches of entertainment if the show were to, for some reason, come to an end. As the mastermind behind the magic of parodies such as this, Corden should be all set too. And if these guys want to team up again in the future, certainly no one would object to that.