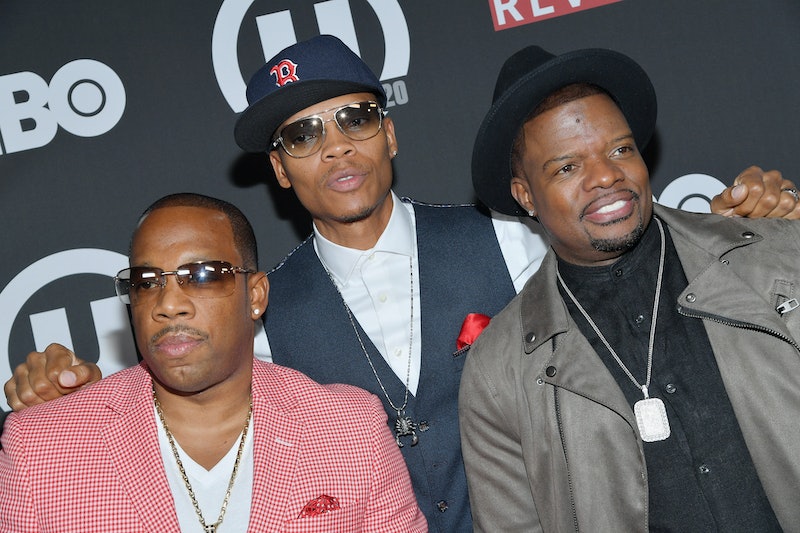 The much-anticipated BET miniseries revolving around the life and times of seminal '80s boy band, New Edition, has begun its three part airing. As Thursday marks the third and final episode, fans have almost been given six full hours of New Edition. Six. However, once The New Edition Story ends, more than likely, some follow-up questions will arise. Sure, six hours is a lot, but is it enough to cover each and every member in detail — including what happened to them after New Edition? Probably not. It's fair to ponder where life took Ricky Bell, Michael Bivins, Bobby Brown, Ronnie DeVoe, Johnny Gill, and Ralph Tresvant. Let's start with Bell, because, well, he's at the top of this list. Where is Ricky Bell now?

Some members of the popular '80s boy band remained in the spotlight following the group's split, while others fell by the wayside and carried on with the rest of their lives. Bell didn't end his music career after New Edition. As you may or may not know (hopefully you do, and if you don't, I am deeply sorry), three members from New Edition went on to form the hip-hop tour de force group, Bell Biv DeVoe. The band name combines the surnames of the singers who participated ("Biv" is short for Bivins). Besides that, which is not to minimize such a feat at all, here's what Bell's been up to, post-New Edition.

He Released A Solo Album

In 2000, Bell released a solo, soul album called Ricardo Campana. Curious as to why there's not more appreciation out there for the album's cover art, so if you find out, let me know.

He Married An Actor

When it comes to Bell's personal life, he has been relatively elusive. The only thing we really know is that in 2004, he married actor Amy Correa.

Bell's Twitter is populated with a bunch of BBD performance announcements. So all you diehard BBD fans, listen up. Your '90s dreams can still come true.

He Was Instrumental In The Miniseries' Creation

Caleb McLaughlin, the actor who plays young Bell in the miniseries, explained that Bell was hands-on during production. “It was challenging to please Mr. Ricky, but what actually helped a lot was Mr. Ricky being hands on in the project,” he told The Huffington Post. “I would call him and ask him some questions."

It looks like when he's not performing, Bell spends time watching sports. Specifically, he appears to be a big fan of the Boston Celtics.

Wherever his career takes him now, it's certainly clear that Bell's had an incredible run thus far.