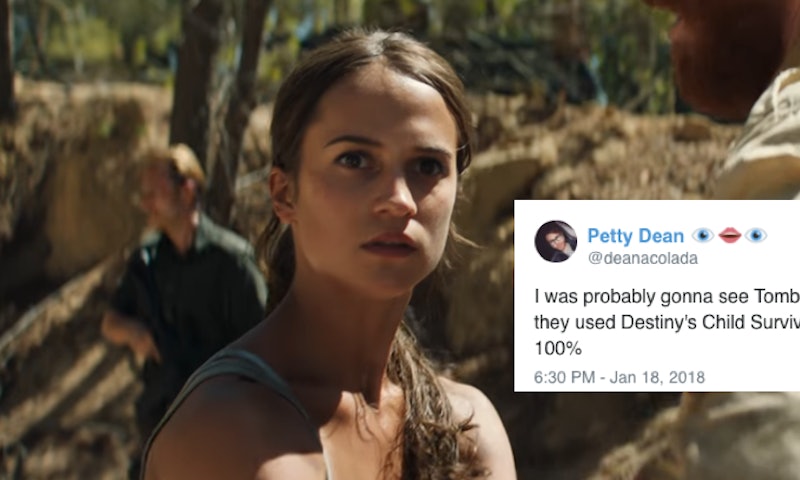 The latest trailer for Tomb Raider, released Jan. 18, starts off with a young Lara Croft in the heart of London, haunted by the passing of her father. Unable to let the memory of him go, Croft goes on a mission to piece together what ultimately led to his death. This leads Croft to her father's last-known location off the coast of Japan, where she's introduced to a neighboring collective named Trinity. The journey to the island isn't an easy one, and when there, Croft learns of Trinity's plans to launch a global genocide. And of course, it's up to her to stop it all from happening.

Vikander, who received both critical acclaim and an Academy Award for her 2015 role in The Danish Girl, adds a whole new level of fierceness to the, already coveted character of Lara Croft. And from the looks of this trailer, fans will be in for quite an experience.

Catching glimpses of Vikander being a badass in the trailer is thrilling, but what seemed to catch a lot of Tomb Raider fans off-guard was the haunting cover of Destiny's Child's hit, "Survivor." While it's currently unclear who exactly sings this version, it's use in the trailer couldn't be more perfect.

The 2001 song, which was also the title track for the group's third studio album, cemented Destiny's Child as a force to be reckon with in the pop charts. Not only did the song serve as an anthem for many who felt alienated or counted out, but its inspirational lyrics tell of how the group overcame its own bout of industry battles.

The group found themselves to be the talk of the town while going through a rotation of members. In 2000, original members LaTavia Roberson and LeToya Luckett were replaced by Farrah Franklin and Michelle Williams, and after just five months of being in the group, Franklin exited her post — making Destiny's Child the legendary trio we know today, Kelly Rowland, Williams, and Beyoncé. At that time, jokes about the new member's longevity made its rounds in the media, and in turn, didn't make the remaining members too happy.

According to Entertainment Weekly's oral history of Destiny's Child's album Survivor, Williams explained what drove Beyoncé to write the powerful track's lyrics, saying, "Beyoncé was tired of people talking about the Destiny’s Child members changing asking, who was going to be the last one to survive?" And Beyoncé being the Queen Bey that she is, turned what made them laughing stocks into a chart-dominating psalm that many still listen to when they need empowerment to this day.

Williams goes on to say later in that interview that the song touched so many people that the group received a ton of fan mail letting them know how "Survivor" got them through some pretty tough life events.

The cover in the Tomb Raider trailer is slowed down, but its tempo works perfectly to accent Croft's potential trials throughout the film. Going up against a powerful terrorist group, and in an unfamiliar place, definitely sounds like it will have its challenges.

But Croft being a young woman — seemingly counted out because of her sex, age, and lack of life experiences, and overcoming those challenges in spite of being underestimated by her antagonists — will make it her victory that much more gratifying to watch.

Laced with the sweet musings of Destiny's Child's own inspirational breakthrough, the clips of Croft being a total badass gains a whole other level of appreciation. And after catching a glimpse of what fans can expect from the March 16 release, this feminist film couldn't have come at a better time.