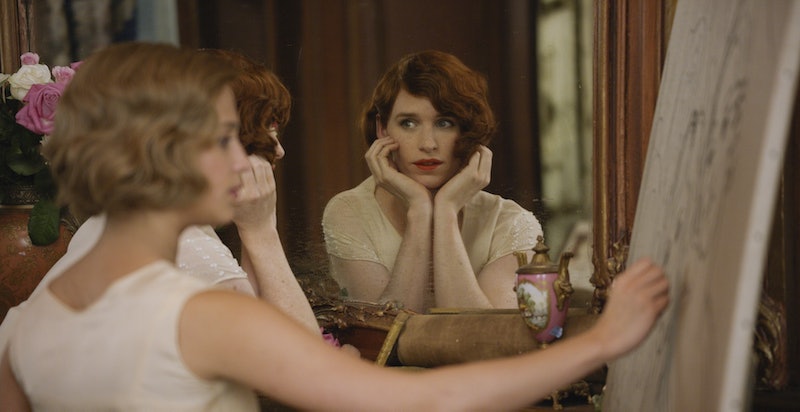 After undergoing a fantastic performance in his role as Stephen Hawking in last year's The Theory of Everything , actor Eddie Redmayne has chosen to embrace another challenging role. In The Danish Girl , based on a true story, Redmayne plays Lili Elbe, a Danish trans woman and, as the movie asserts, one of the first known individuals to undergo gender confirmation surgery. And Lili's tale is an incredible story.

The subject matter of The Danish Girl comes at a timely point. We now live in a time when trans individuals like Caitlyn Jenner and Laverne Cox are household names, where people are finally starting to take notice and do something about the high rates of violence against trans people, and advocates are straining to teach others about how to support the trans community and respect its members by referring to them by the pronouns by which they identify. That said, just because The Danish Girl tackles an incredibly important woman in history, doesn't make it a perfect film — it would've been better to see a trans actress in the lead role, rather than cisgender male Redmayne. The fact is, there are few leading roles for trans actors in Hollywood. On top of that, trans people are four times more likely to live in poverty and experience unemployment at twice the rate of the general population, according to GLAAD.

Still, there's no question that whoever ended up with the role would have an incredible story to bring to life. Elbe's tale is monumentally touching; the film, based on the novel by the same name written by David Ebershoff in 2000, tells the heartbreaking true story of Elbe's road to her surgery. Elbe (born Einar Wegener) was an artist and married her wife and fellow artist Gerda Gottlieb (played by Alicia Vikander) in 1904. Gottlieb's illustrative focus was on fashion magazines, while Elbe was a landscape artist. When one of Gottlieb's models failed to show up for a session, the suggestion arose that Elbe take the model's place. Elbe did, and found herself surprisingly comfortable in women's clothes. "I cannot deny, strange as it may sound, that I enjoyed myself in this disguise," she wrote of the modeling session in her diary (date unknown), according to The Telegraph."I liked the feel of soft women’s clothing... I felt very much at home in them from the first moment."

The couple made the move from Copenhagen to Paris in 1912, after the secret of Elbe acting as Gottlieb's model for her illustrations became widely known, according to The Telegraph. In Paris, Lili was able to live as her true self, openly. Gottlieb was her ally, often escorting her to various social functions. According to The Week, the two divorced on good terms in 1930. It was the same year Elbe traveled to Berlin and underwent her first gender confirmation surgery, a series of surgeries that continued until 1931, where a uterus transplant proved fatal. She died from complications post-surgery, just before her 50th birthday that year. Before her death, Elbe was able to legally change her name and had a burgeoning romance with Claude Lejeune, an art dealer, reported The Week.

While Elbe's death was tragic and entirely preventable by today's medical standards, it's heartening that she was able to live, albeit for a short time, with the ability to live authentically as herself. Now let's see how Redmayne, along with director Tom Hooper, brings her amazing story to life in The Danish Girl.

More like this
A New ITV Doc Follows Dame Kelly Holmes’ Emotional Coming Out Story
By Sam Ramsden
Keke Palmer Hopes 'Lightyear' Will Help “Normalise” Same-Sex Relationships
By Sam Ramsden
'The Undeclared War' Spotlights The Real-Life Threat Of Cyber Attacks
By Maxine Harrison
Lilibet & Prince Charles’ First Meeting Was Emotional, According To Reports
By El Hunt
Get Even More From Bustle — Sign Up For The Newsletter