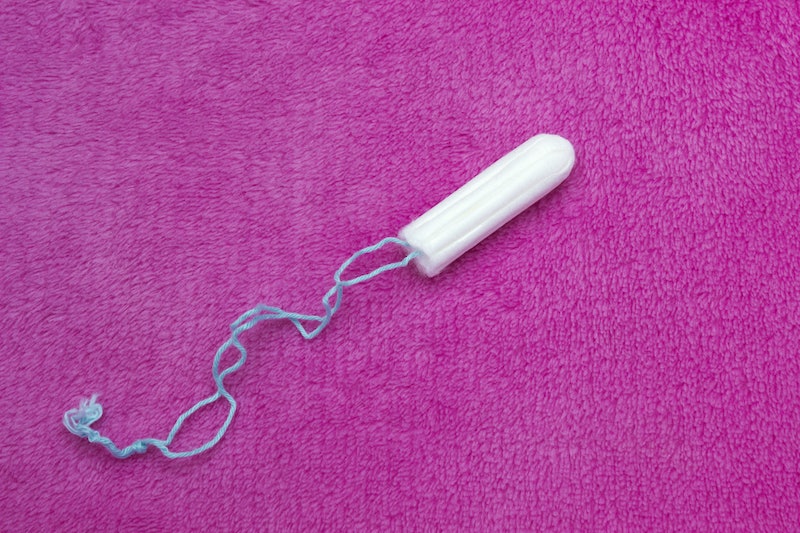 In 2015, former chancellor George Osborne didn't promise to remove the 5 percent tax on sanitary products. However, he did pledge to use the money to fund charities that aimed to support and improve the lives of women. But according to a new open letter signed by more than 100 prominent women, the tampon tax fund is failing to support women's charities.

The funding is reallocated on a yearly basis, and earlier this year, 10 charities were awarded a total of £15 million. But, according to The Guardian, only one of these organisations, Southall Black Sisters, was women-only. A similar thing happened in 2018 when only two out of the 10 charities chosen were specialist women's groups. Although the other names were given funding for projects aimed at women, they are considered to be much larger charities with a much broader focus. (The biggest 2019 grants were given to UK Community Foundations and Homeless Link, reports Civil Society.)

The Women's Resource Centre (WRC) is behind the open letter that has been sent to the Department for Culture, Media, and Sport. WRC's chief executive, Vivienne Hayes, told the Guardian: "It seems that the government thinks that large charities are the best option which is actually completely incorrect.

"Research shows that the women who need support services consistently say they want to go to all women’s organisations who understand their needs and look like them. We do things differently and we do things better but the sector is not getting the money, either from central government or local authorities."

In response, a spokesperson for the Department for Digital, Culture, Media & Sport told The Guardian: “Every project that receives tampon tax funding must benefit women and girls. Funding is allocated to reach projects across the UK.”

However, Hayes, and a long list of other women, including academics and charity representatives, have called the results which show where the funding has been allocated "gravely disappointing" and specifically criticised the criteria laid out on the tampon tax fund application form. Currently, the minimum bid requirement is £1 million for a one- or two-year project.

It doesn't take a genius to work out that this is effectively barring smaller charities from even applying. And as the letter states, women's charities — which tend to be "grassroots, locally embedded and relatively small in size" — fall into this category.

Exactly why the government's criteria is so strict is unclear. The Department for Culture, Media, and Sport did issue a brief response to the letter, but simply stated: "Every project that receives tampon tax funding must benefit women and girls. Funding is allocated to reach projects across the UK.”

Hayes, however, believes the lack of governmental support for women-only organisations comes down to one simple thing. "They know we are the ones that will critique them and hold them to account," she told the Guardian in 2018. "The general charities don’t always have that strong analysis of structural inequalities, so I think it’s not surprising that the women’s sector has been sidelined and the mainstream organisations that say ‘we work with women’ have been given the money.”

In addition to its letter, the WRC has started a petition asking for the government to "honour the promise" and give the tampon tax solely to women's charities. Almost 500 people have signed so far.

More like this
Wimbledon Alters All-White Kit Rule Amid Candid Period Discussions
By Catharina Cheung and Rachel Mantock
Iran Has Issued A Death Sentence Over Mahsa Amini Protests
By Catharina Cheung, Darshita Goyal and Maxine Harrison
MOBO Awards Found Kanya King On The Woman Whose Grit & Determination Spur Her On
By Kanya King
Amanda Gorman Shared A Powerful Message On Meghan Markle’s Penultimate Podcast
By Darshita Goyal
Get The Very Best Of Bustle/UK