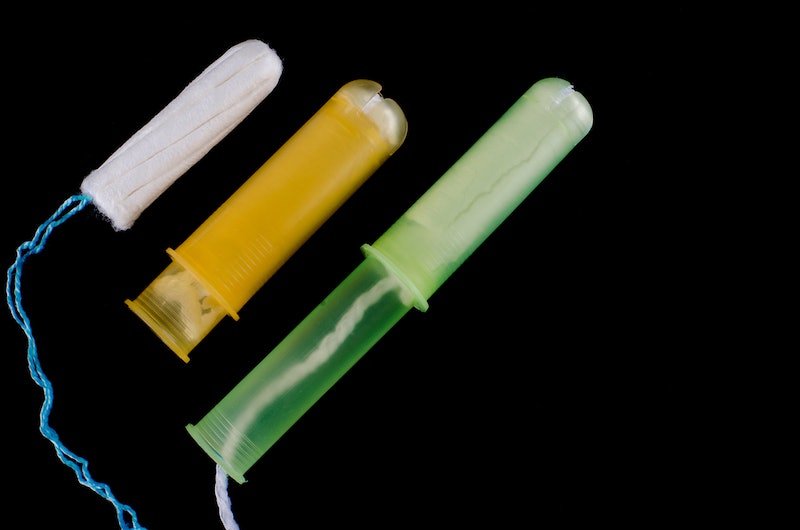 Period poverty is a global problem with both children and adults struggling to afford the cost of pads, tampons, mooncups, and the like. Despite protests and shocking statistics, governments have been slow to implement change. It's left many people wondering how to get free sanitary products in the UK.

The situation in the UK is similar to other countries, as Marie Claire reports. The so-called tampon tax — which classes sanitary products as a luxury item, adding a five percent VAT on top of the price — is still in existence. As Third Sector states, the government has pledged to donate tampon tax funds to various charitable organisations. But this does little to help the average person. Supermarkets including Waitrose and Tesco have agreed to bear the cost of the tax, reports the Independent, but not all have signed up to the movement.

It's safe to say that the cost is still high. A 2015 study revealed that people are likely to spend more than £18,000 on periods over the course of their lifetime. This includes sanitary products as well as related pick-me-ups like chocolate and essentials such as new underwear. (The lifetime cost of period products alone is estimated to range from a few hundred pounds to almost £2,000, according to Money Saving Expert.)

Young people are being deeply impacted. Amika George's #FreePeriods campaign notes that period poverty has forced over 137,700 children in the UK to miss school with one in 10 of young people unable to afford menstrual products. Not as much research has been carried out into the effects of period poverty on adults but it's not difficult imagine a similar impact.

A new investigation from the British Medical Association did however find that over two fifths of hospitals don't supply sanitary products to patients who are on their periods, suggesting that it's not just the government and education sector that fail to consider such needs.

Parts of the UK are under new legislation. In August 2018, the Scottish government announced that all students attending schools, colleges, and universities in Scotland would have free access to sanitary products. But what if you live in the rest of the UK?

Well, sourcing free period products is more difficult than it should be. One option is to directly contact manufacturers of such products. Always — a prominent company in the period realm — already runs school-based initiatives, promising to give any secondary school up to 3,700 pads twice a year. All the school needs to do is register.

Food banks are an alternative. People are not only encouraged to donate food but also other essentials including sanitary products. You can find your local food bank here, but be aware that you may need to be referred by a doctor, social worker, school staff member, or similar in order to access such services.

A number of charitable initiatives can also help. Bloody Good Period currently supplies monthly products to 16 asylum seeker drop-in centres across London and Leeds. In the future, the organisation hopes to expand to food banks and drop-in centres in other areas. The Red Box Project is mainly focused on schools. The list of places it currently donates to plus an application form for your area or school to be included can all be found on the website.

More work still needs to be done to help every person who is experiencing period poverty. If you have any spare money or sanitary products, food banks and organisations like the ones mentioned above always welcome donations. And if you have a voice to lend, join the campaign to end period poverty in the UK once and for all.