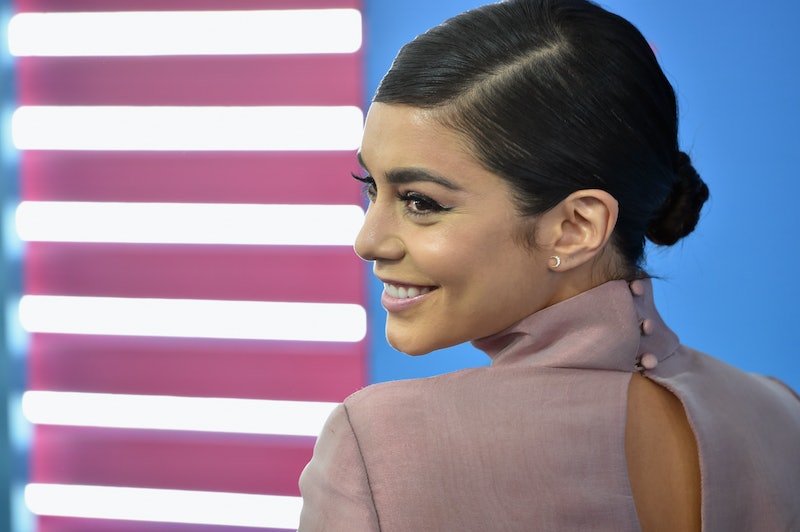 During Sunday night's Teen Choice Awards, Vanessa Hudgens accepted the #SeeHer award for helping to push back against female stereotypes. And, in the moments that followed, Hudgens used her Teen Choice Awards speech to remind viewers to embrace their differences — showing exactly why she won the surfboard in the first place.

The actor, now 28, began by reflecting about being young and not knowing who she wanted to be, and how having to find that direction helped push her to become a better woman. "Not gonna lie, when I was 25 I felt like I had it all figured out and then I woke up at 27 and realized I had no idea who I was, what I stood for, or what I wanted," she said. "It was terrifying and extremely humbling. I look back on it extremely grateful because it pushed me to think about what kind of woman I wanted to become."

She continued with a rallying cry to celebrate the many things that make us unique, and to not be afraid to be who we are:

And finally, she reminded fans to "know that you are enough." For an honor as significant as the #SeeHer Award, Hudgens' words were fittingly empowering.

The #SeeHer award honors the recipient for, according to the press release, “pushing boundaries on changing stereotypes and embodying the fight for realistic female portrayals in media.” Hudgens' speech alone proves that she was the right person to take it home, with its focus on individuality and embracing the things that make us unique. In a world where women are still put into a box and shamed for attempts to break outside of it, Hudgens' words are inspirational, encouraging, and supportive of women finding what makes them them and cultivating that quality, that differentness.

Between the award and the woman taking it home, #SeeHer seems less like a hashtag and more like a promise that women are worthy of being seen. And that's something we can all get behind.

More like this
Keke Palmer Hopes 'Lightyear' Will Help “Normalise” Same-Sex Relationships
By Sam Ramsden
Lilibet & Prince Charles’ First Meeting Was Emotional, According To Reports
By El Hunt
'Mean Girls' ​​Daniel Franzese Spoke Candidly About Conversion Therapy
By Rachel Mantock
Viktor Hargreeves’ Coming Out Scenes Are The Sweetest Part Of Umbrella Academy Season 3
By Gretchen Smail
Get Even More From Bustle — Sign Up For The Newsletter