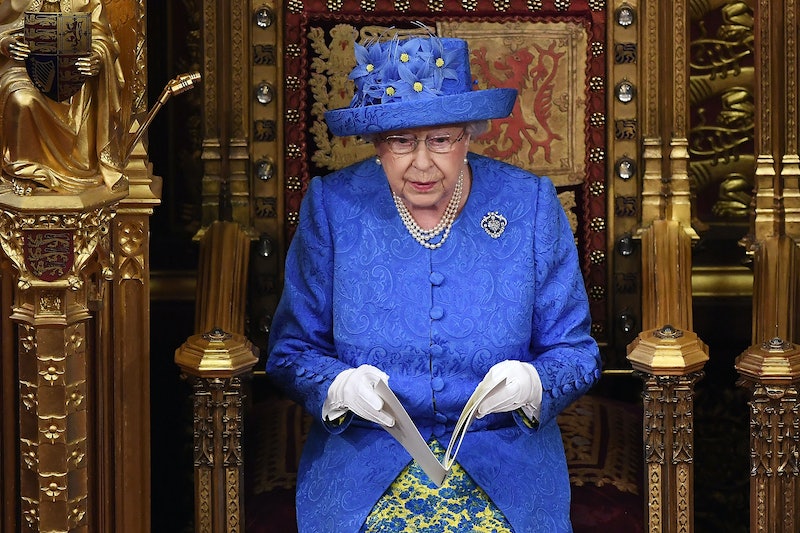 As one of the most high profile people in the world, if the Queen wears something a little out there then you’re going to hear about it. And in 2017 one of Her MAjesty's outfits in particular caused a stir. However, the truth behind the Queen's supposedly EU-themed hat has been revealed and it turns out it was all a bit misunderstanding. Despite the fact that the Queen has been dragged into Brexit affairs from time to time, the monarch is supposed to be politically neutral. So, was her blue and yellow hat a comment on Britain leaving the EU?

Never one to shy away from colour, the Queen wore a blue hat with yellow flowers on it to the 2017 State Opening of Parliament, causing many to speculate whether it was a comment on Britain leaving the EU. However, in her recently released book The Other Side of the Coin: The Queen, the Dresser and the Wardrobe, Angela Kelly revealed the hat was a complete "coincidence.” If anyone knows the Queen’s wardrobe it’s Kelly as she dressed the monarch for 25 years. She wrote, “we chose a Breton-brim block style [hat], which would create an upturned brim, so Her Majesty’s face could be clearly seen, and the Queen could see everyone in the room. We chose a large square crown to balance the brim and five flowers, made from feathers with tiny seed pearls, painted yellow.” She continued:

“It never occurred to Stella and me that people might think we were copying the European Union flag. The press and the rest of the media were quick to assume that was the case."

While the EU and Brexit may not have been in mind, Kelly revealed that the background against which the Queen will be sat, colour clashing, and the message the Queen will be giving are all taken into consideration when dressing the monarch.

If you want the full lowdown on what it’s like dressing one of the most iconic people in the world you can by The Other Side of the Coin by Angela Kelly now (HarperCollins, £20.)