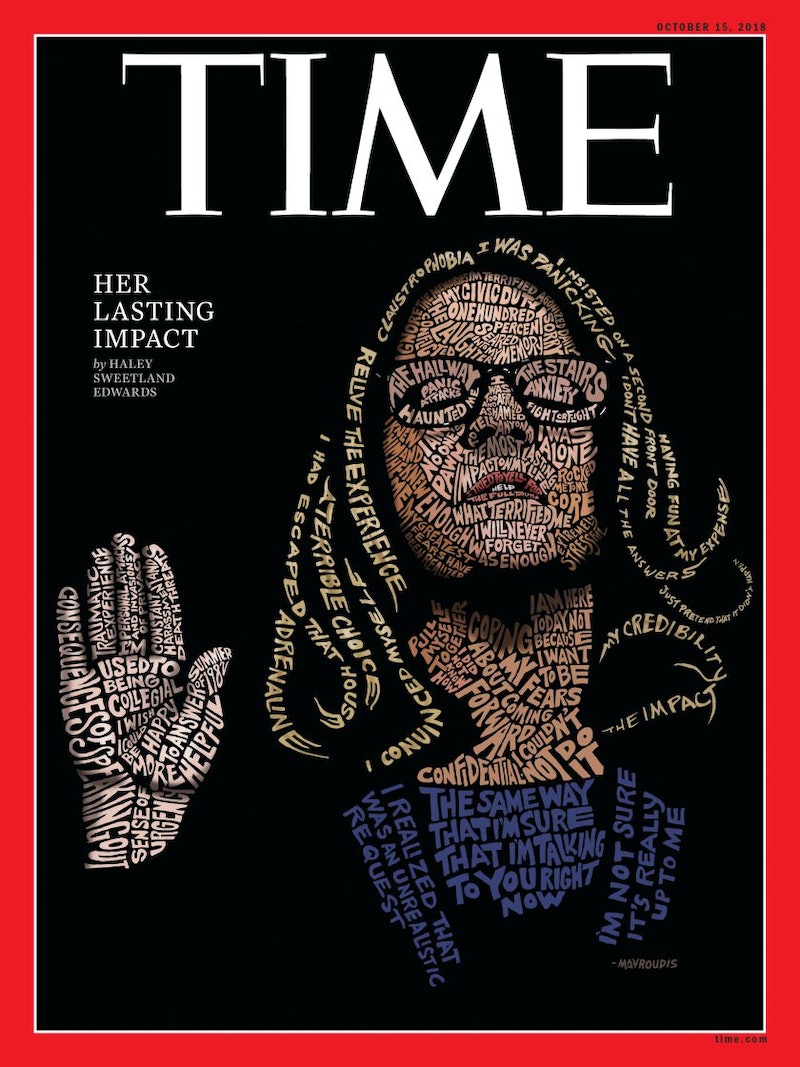 "Indelible in the hippocampus is the laughter." Christine Blasey Ford's testimony on Sept. 27 is still ringing out around the country, and on Thursday it got a tribute from one of the country's most famous magazines. TIME's new Christine Blasey Ford cover shows the power of her words with a gripping image of her face constructed solely out of typography.

The man behind the illustration is John Mavroudis, a Bay Area-based artist. "This particular process is like putting a jigsaw puzzle together, but with an infinite number of possibilities," he told TIME. "I started with an image of Ford and then drew the words in where they might be appropriate."

"The memory quotes would be attached to her forehead area, and the quotes about wanting to help I placed on her hand," he continued. "It’s a fascinating process to watch the face take shape, while hoping that you’ve captured the essence."

The cover article, written by Haley Sweetland Edwards, argues that Ford's testimony has already made an enormous impact. It describes how women all over the world intently tuned in to her hearing, how viewers called in to C-SPAN's live coverage to share their own sexual assault stories, how politicians on both sides of the aisle couldn't help but call Ford credible, and how recent polls show that more Americans believe her than Brett Kavanaugh.

Edwards writes that Ford's words might not be enough to block Kavanaugh's confirmation to the Supreme Court, but that they were powerful nonetheless. She argues that they served as a "warning" to men "that drunken violence could shadow them all their lives" and an "invitation" to victims "to speak up, no matter how powerful the accused, no matter how long ago the attack."

Mavroudis has made illustrations for many magazines. His cover for The Nation's Oct. 24, 2016 issue depicted President Donald Trump in a similar vein. It also showed his face made up only of words — except that they weren't his own words, but insults and criticisms like "fascist," "bankrupt loser," and "racist."

"Since a picture is supposed to be worth a thousand words, I thought I would try to be a bit literal with this artwork," Mavroudis wrote of the Trump image. "I didn't need all one thousand, but I think I got the message across."

Mavroudis has also made similar images of Hillary Clinton and Harvey Milk, who became the first openly gay elected official in California history as mayor of San Francisco in 1978. He was assassinated later that year.

According to TIME, this is the magazine's second cover that shows a person's likeness made of typography. The image for the Oct. 15, 2012 issue showed presidential candidates Barack Obama and Mitt Romney squaring off. Artist Dylan Roscover constructed their faces using their opposing statements, like "Unlike President Obama, I will not raises taxes on the middle class," and "We cut taxes for 95 percent of working families."

The FBI's investigation into Ford's allegations against Kavanaugh (which he denies) concluded on Wednesday night. Senators will begin reading the results on Thursday. A vote on his confirmation could occur as early as this weekend, according to USA Today.