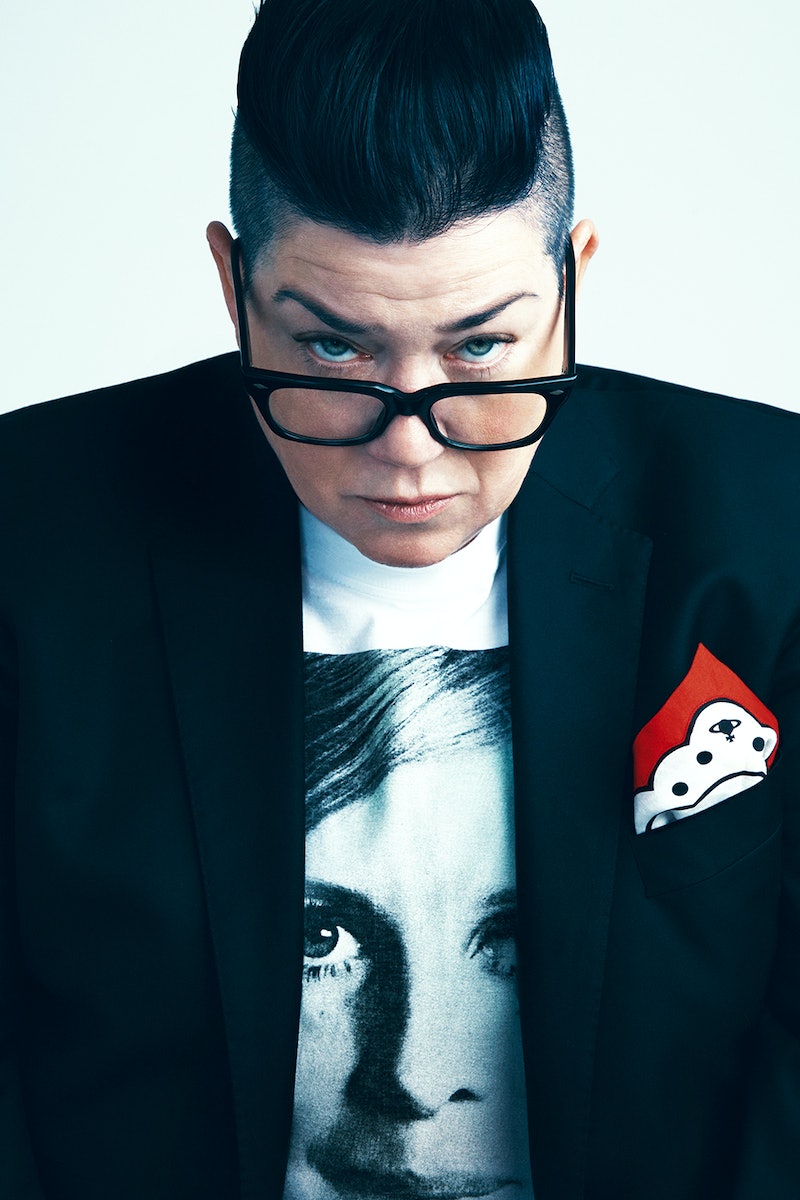 As a longtime activist, it came as no surprise that Orange is the New Black actor Lea DeLaria participated in the 2017 Women's March On Washington. It was actually her fourth march on Washington, having participated in others for women's and gay rights in the past. She's been an outspoken champion for the causes Trump's presidency threatens and is more dedicated to those causes than ever. As told to Bustle Associate TV Editor Martha Sorren, here's how DeLaria plans to fight to defend the rights of her "queer brothers and sisters," and women everywhere.

On Saturday, I saw a sign at the march that said, "When they go low, we go ape shit," and that is so my brand of politics. The time to "go high" is over. So, where do we go after the Women's March? We stay right here. We don’t go anywhere but here. We have to get people outside of Donald Trump's gate every day, hundreds of people telling him what a dick he is. We have to organize resistance.

They think that we don’t have commitment, but we must stay committed to this. This is our secret weapon.

I’m completely and utterly inspired by what happened on Saturday. Prior to the event, I was feeling incredibly disheartened. This whole notion of "Make America Great Again" — it's the "again" that scares me. When I first came out and I started my activism in the latter part of the '70s, there were laws against gay people. I have been arrested for being gay, and been thrown in jail for holding hands with a girl and kissing a girl on two separate occasions. So, where exactly is that "again" in Trump's slogan? Is it where I’m "again" going to end up in jail for simply loving a woman? Is it where people "again" have to die from sticking a coat hanger in their uterus to abort an unwanted fetus? Is that the "again" that he wants to go back to?

We have to stand up, and the way we have to do it is to keep coming at Trump and his people. It can't end here with the march. The opposition thinks that it will. They think that we don’t have commitment, but we must stay committed to this. This is our secret weapon.

We have to keep organizing resistance. Look at the anti-war movement in the '60s, look at civil rights marches, look at queer rights protests, that's the way to do it. The march for Trump's tax returns to be released should be the next march, and then we should have a march about the electoral college. Let’s just attack every issue.

Michael Moore said something on stage during the march; Call your congressmen every day. Call your senator every day. There's one phone number that gets you to the switchboard at Congress, and you don’t even need to know who your congressman or senator is — all you have to do is enter your zip code and they will transfer you over. The number to call is (202) 225-3121. If everybody can call them every day and complain, we will tie up Congress. As many people doing it as possible would be great. It takes two minutes. Complain. Unlike Aaron Burr says in Hamilton, this time do let them know what you are for and what you are against.

One fact I need Trump to know is that queer people are discriminated against. Still. And murdered in the streets. Still. And we need protection in place. Hate crimes happen every day in this country. Every day. How dare he take queer rights off of the governmental website? That should be put back up immediately.

The march felt really special. There were so many high powered Hollywood feminists there, male and female, and that was amazing.

Trump tweeted that "celebs hurt cause," during the election, but what is he if not a celebrity? He's not a politician. He’s not a businessman. He keeps saying he’s a businessman, but he’s declared bankruptcy more times than I’ve fucked a girl over the weekend and that’s saying something. He's a reality TV star. He’s a celebrity. So, I think it’s very ironic that he, as a celebrity, is mocking others for standing up to him. If we as actors have the power to bring attention to a cause we care about, then we will do so. And I will do so.

In the meantime, to my queer friends, gird your loins. Know that they’re going to fight us even harder now, and it means we have to step right up. To my fellow women, oh, good lord. We've got a lot of work to do. And I'm ready. My rage is up. To be really clear, it's rage. It's not anger. Anger is a tiny, little emotion that bumps up along the side of the road. Rage tears down the fucking highway at 120 miles per hour. That’s me, honey. I’m rageful. And rage gets things done.

More like this
24 History-Making Black Women You Probably Didn't Learn About In School
By Ayana Lage and JR Thorpe
25 Inspiring Quotes From Black Women To Celebrate Black History Month
By Kyli Rodriguez-Cayro and JR Thorpe
The UK Government Is *Finally* Banning Conversion Therapy
By Sophie McEvoy
'Brookside' Is Coming Back & Soap Opera Fans Are Going Wild
By Sam Ramsden
Get Even More From Bustle — Sign Up For The Newsletter
From hair trends to relationship advice, our daily newsletter has everything you need to sound like a person who’s on TikTok, even if you aren’t.