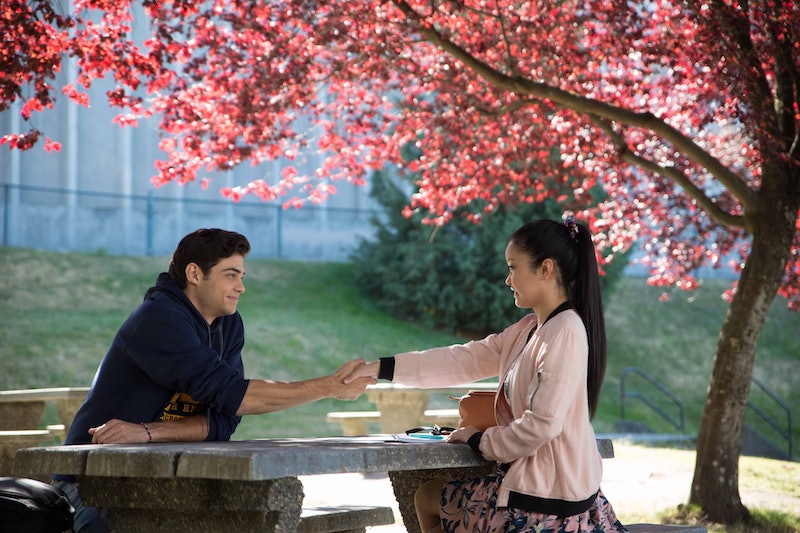 Whoa, whoa, whoa. Looks like Peter Kavinsky has some competition. The first photos from To All The Boys: P.S. I Still Love You photos were released on Thursday, Dec. 12, and they finally show Peter (Noah Centineo) and Lara Jean (Lana Condor) embracing being a real couple. Unfortunately for shippers, the images also tease Lara Jean's love triangle to come in the sequel to Netflix's 2018 movie, To All the Boys I've Loved Before. Based on the pictures, not only does Lara Jean have eyes for Peter, but she just might also have feelings for John Ambrose McClaren (Jordan Fisher).

Fans will remember John showing up at the very end of To All The Boys I've Loved Before, Lara Jean love letter in hand. Granted, the actor has been changed for the sequel, but John is still very much around. In fact, one of the images shows John and Lara Jean holding each other closely and intimately staring at one another. But don't worry, there are two other photos of Lara Jean with Peter should make their fans rest somewhat easy.

The sequel, which drops on Netflix on Feb. 12, 2020, will pick up with Lara Jean and Peter's newfound relationship and deal with John's surprise appearance. Even though Lara Jean and Peter are pursuing a relationship, director Michael Fimognari teased to EW, "We still have the little drop in the pond that was created in the first movie, which is these love letters that got sent out, and the ripple of that gets to come back."

As much as she loves Peter, Lara Jean is definitely going to be confused by John's arrival. Condor told EW that her character and John are "true friends," which makes things difficult. "You’re like, 'Do I love him or do I love him as a friend?' So he’s really there to mix it up," she explained. Fimognari was a bit more direct in his response, clarifying that John came for Lara Jean, so Peter better watch his back.

In addition to P.S. I Still Love You, there's also a third movie on its way called To All the Boys: Always and Forever. A release date for the final film in the franchise based on Jenny Han's book trilogy hasn't been announced, but filming has already wrapped. Who knows what will happen in the sequel, but fans just might find themselves divided into Team Peter and Team John.

More like this
Everything To Know About Netflix's Marilyn Monroe Movie 'Blonde' Starring Ana De Armas
By Grace Wehniainen
Here’s Everything Coming To & Leaving Netflix In August
By Jake Viswanath
Before 'Bullet Train,' Revisit These Brad Pitt 'Fight Club' Premiere Photos From 1999
By Grace Wehniainen
What’s New On Netflix: 'Never Have I Ever' & 'Indian Matchmaking' Return
By Arya Roshanian
Get Even More From Bustle — Sign Up For The Newsletter