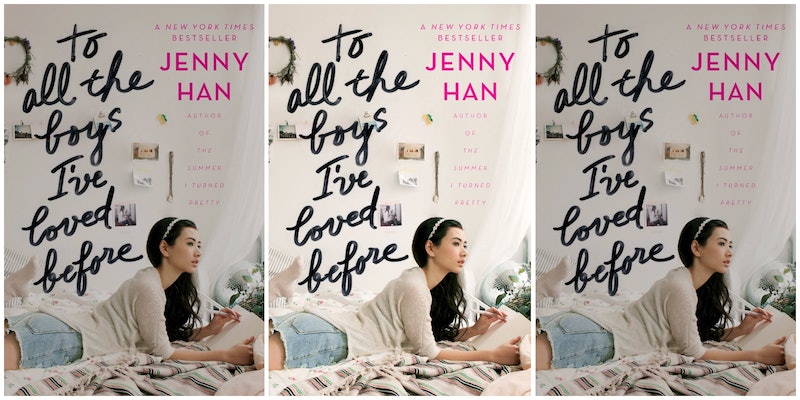 Heads up, YA readers! Jenny Han has just announced that the To All the Boys I've Loved Before movie is happening, and it's time to get excited, because this is an important moment for Asian American representation in film.

To All the Boys I've Loved Before centers on 16-year-old Lara Jean Covey, who finds herself in the middle of romantic possibilities with two boys: her older sister's ex-boyfriend Josh, and her former friend Peter. Lara Jean's story continues in P.S. I Still Love You and Always and Forever, Lara Jean.

Hollywood has a long history of erasing Asian identities by casting white actors to portray Asian characters. Recent notable cases include Ghost in the Shell, The Martian, and Aloha.

Thankfully, the To All the Boys I've Loved Before movie won't have this problem, as X-Men: Apocalypse star Lana Condor has been cast as Lara Jean Covey. Variety reports that Pretty Little Liars' Janel Parrish and Descendants 2's Anna Cathcart have also been cast, presumably as Lara Jean's sisters, Margot and Kitty. In her Friday announcement tweet, Han writes, "The most important thing for me as the author is seeing an Asian American girl in the starring role, and with this movie, we get to see not one but THREE!"

There's no word yet on when the To All the Boys I've Loved Before movie will hit theaters, but the film has already begun production, so Han's fans won't have to wait long to see her heroine on the big screen.

More like this
Jessica Simpson On The Time She Was Pursued By A Backstreet Boy & An *NSYNC Member
By The Editors
Here's How Netflix Should Adapt Prince Harry's Memoir Into A Movie
By Ginny Hogan
Reese Witherspoon Confirms This Fan Favorite Will Return For 'Legally Blonde 3'
By Jake Viswanath
Alicia Silverstone Revives Her 'Clueless' Character In This Super Bowl Commercial
By Jake Viswanath
Get Even More From Bustle — Sign Up For The Newsletter
From hair trends to relationship advice, our daily newsletter has everything you need to sound like a person who’s on TikTok, even if you aren’t.