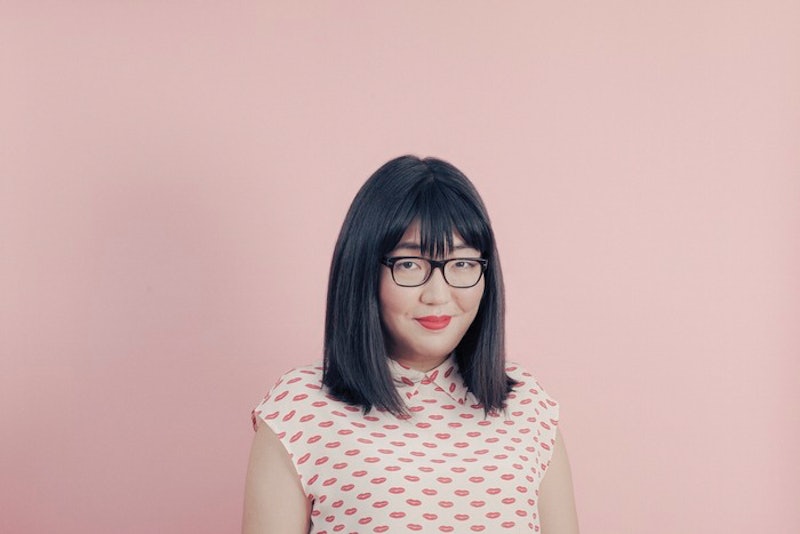 The covers to To All The Boys I've Loved Before and P.S. I Still Love You may surprise you — in a good way, hopefully. After all, the matching covers of Jenny Han's young adult duology feature an Asian-American girl, a model intended to look like the novel's main character, Korean-American teenager Lara Jean. In a world where Asian and Asian-American actors, writers, and filmmakers have to fight for access to projects about their own cultures, these covers are incredible significant.

Jenny Han is one of a growing number of authors who speak openly and loudly about the need for greater inclusivity in YA and children's literature. Later this week, she will participate in We Need Diverse Book's BookCon panel, "Love & Loss In Children's Literature," alongside Gene Luen Yang, Francisco X. Stork, Anna-Marie McLemore, Sherman Alexie, and Leigh Bardugo.

For Han, writing diversity into her own novels is a matter of writing the world as it exists. "I write the world the way I see it, through this specific lens," she tells Bustle. "I think one way or another, all writers do that: they show you the world through their eyes. They show you who they think is worth telling a story about. Who is worthy of being a hero. And, everybody wants to feel like their story is worth being told. Everybody wants to the hero of their own story."

Having diverse world views represented in the pages of YA books means having authors from all backgrounds pushing pen to paper and writing their stories. Han takes that seriously (she tells us All-American Boys , An Ember In The Ashes , and Everything, Everything are on her diverse reading list), and she even has a word of advice for authors struggling to be more inclusive in their writing.

"My advice is to approach it humbly, with respect, and not to assume that just because you are a good storyteller, that you know how to write all stories well," she says. "It sounds like common sense, but I think for a lot of people, this movement toward diversity has been a revelation."

"My advice is to approach it humbly, with respect, and not to assume that just because you are a good storyteller, that you know how to write all stories well."

Han, like many young adult authors, engages with fans and readers through her social media accounts, particularly Twitter, a platform that has become increasingly important in amplifying the conversation about diversity in media and literature. Twitter has also provided readers and critics with a means to make their opinions about novels known — and sometimes that means calling out authors for making mistakes in their representations of cultures and peoples.

"This idea that you don't get to tell whatever stories you want to tell just on a whim, without serious consideration — that feels new to me," she says. "And people point out when you make a misstep — that’s relatively new, too."

The push for diverse characters and stories has been especially prominent in the world of YA lit, something Han attributes both to the community's "direct line" to their readership ("Teens are on social media, making demands. We hear them.") and to young adult authors' dedication to telling the stories they lacked as kids.

"I think people who get into this business care about the welfare of children," Han says. "We want them to see themselves reflected in their stories, we want them to imagine themselves as heroes and villains and everything in between. We want them to know that there isn’t just one kind of story. But underneath all of that, I think we — and I’m speaking particularly about writers of color — want them to have what we didn't have."

In To All The Boys I've Loved Before, Han introduces the world to one such story. In the novels, Lara Jean gets caught up in a wild romantic entanglement when the secret letters she wrote to the crushes of her past get mailed out mysteriously. After a series of hilarious mishaps, Lara Jean finds herself in the middle of a complicated love-triangle with two of the recipients of the letters: golden boy Peter Kavinsky, who hasn't quite gotten over his ex-girlfriend, and Josh, the adorable boy next door... who also happens to be her sister's ex-boyfriend. The first book, released in 2014, left readers aching for more Lara Jean, and Han delivered the goods in 2015 with the release of the second installment, P.S. I Still Love You. In the sequel, Lara's relationship with Peter intensifies, but she also feels the magnetic pull of a charismatic boy from her past, John Ambrose McClaren.

The series ends with the second novel, but readers may see one beloved character again: John. After all, Han wrote on Instagram that he is "the whole reason [she] wrote P.S. I Still Love You." Despite this, she's keeping quiet about the possibility of a John Ambrose McClaren spin-off. "All I can say to that is 'never say never,'" she says.

For now, Han is focusing on a "secret" future project and preparing for BookCon, where she will also participate in a panel on teenage friendships, strong female characters, and summer romance with two of her former classmates from The New School's MFA program: Siobhan Vivian, author of The Last Boy And Girl In The World , and Morgan Matson, author of The Unexpected Everything.

Perhaps next week, when the madness and excitement of BookExpo America and BookCon have subsided, Han will have a moment to kick up her heels and dig in to her summer must-reads: My Brilliant Friend by Elena Ferrante, Hamilton: The Revolution by Lin-Manuel Miranda and Jeremy McCarter, and Sweetbitter by Stephanie Danler. But this week, she's got BookCon on the brain, so fans and readers should take this opportunity to say hello to Jenny Han at one of her panels or signings. For a list of BookCon events, including information on a Jenny Han signing, visit the official website.

Photos: CelineReads/Instagram The Last Boy And Girl In The World