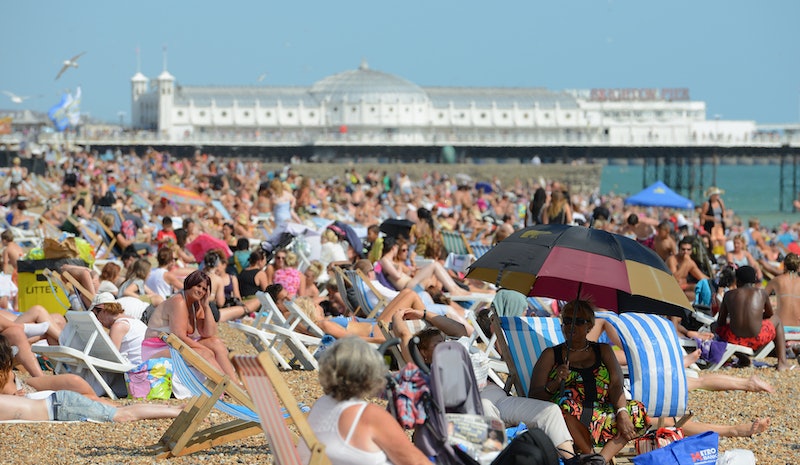 We're nearing the end of July 2019, and it's safe to say the UK has experienced of seriously sweaty days of the past few weeks. It’s felt more like the Bahamas than Britain. And it feels like, every year, heatwaves are becoming more commonplace. However, while these hot days feel like the perfect weather for the summer holidays, are they actually a cause for concern? New reports are suggesting that the warmest days in UK history may have all occurred in the last 20 years, but is this something we need to be alarmed by?

The Met Office’s State Of The UK Climate report, which is the fifth annual one, indicates that, since 1884, all of the UK’s 10 warmest years have happened since 2002. The Met Office has recently been able to extend it's digitisation of weather reports back from 1910 to 1884 and, as Head of the Met Office’s National Climate Information Centre Dr Mark McCarthy explains, "[l]ooking back further into the UK’s weather reveals a very interesting timeline with the top ten warmest years at the most recent end, since 2002." He continued: "Extending the record back by 26 years from 1910 to 1884 didn’t bring in any new warm years[.]"

And it’s not just getting hotter. Oh no. In fact, the Met's report also suggests that the UK is getting even wetter. Six of the 10 wettest years have happened since 1998. And, in the last 10 years, winters have been 12% wetter and summers have been 13% wetter than the period between 1961 and 1990.

While the nation enjoys tropically hot weather, this reports seems to re-iterate a lot of people's long-held fears regarding climate change. Mike Kendon, co-author of the report and a climate information scientist, said that the phenomenon is very much upon us. "Climate change is not some abstract thing in the future that we are predicting is going to happen," he said, "The point is that climate change is happening and it is happening now."