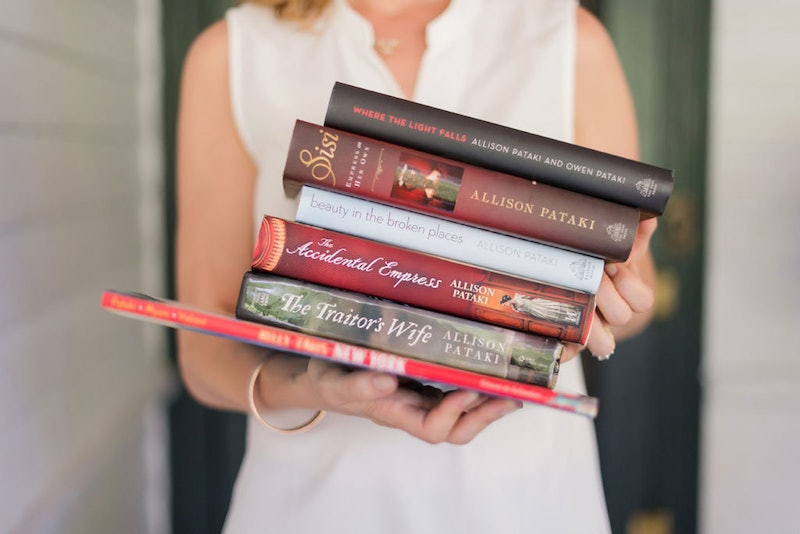 This year there’s a rich new slate of historical works that share the stories of overlooked women who quietly made their mark on history. Books like Katherine Sharp Landdeck’s The Women with Silver Wings, which examines the role of female pilots in World War II, or Ariel Lawhon that exhumes French saboteur Nancy Wake in Code Name Hélène. Then there’s Allison Pataki’s latest novel, The Queen's Fortune, which centers on another often forgotten figure: Désirée Clary, who’s best known as the woman Napoleon left for Josephine.

"When you say the name Désirée Clary, most people have no familiarity or frame of reference with that name at all," Pataki tells Bustle of her heroine. "She not only survived through this incredibly tumultuous, fascinating time period, but went on to reign, and thrive, and ultimately found a dynasty, as a matriarch, that still rules to this day."

Readers will find that Clary’s trajectory is one we often don’t see in history, and is reminiscent of a new generation of royals — like Meghan Markle and Kate Middleton. "[Desiree] is not born royal,” Pataki explains. “She's thrust into these extraordinary life circumstances by her love affair with Napoleon, then goes on to have this really tumultuous life and ultimately becomes Queen of Sweden.”

By marrying Karl XIV Johan, Desiree set up a dynasty that continues to this day, which was very compelling to Pataki. "Napoleon didn't get to found a dynasty that would rule forever, which was his intention. [But] Desiree's dynasty still rules to this day," she says. "The two princesses of Sweden are Victoria and Madeleine. Their middle names are Desiree and Josephine."

Clary’s story has fallen out of popularity over the past few decades, with the last major telling being Annemarie Selinko's 1952 novel, titled simply Désirée. (It went on to inspire the 1954 film of the same name starring Marlon Brando and Jean Simmons.) Pataki even had great trouble finding source material for her research on Clary.

"For me, it started out as a frustrating situation," she says, "but ultimately I realized that was a gift to me, as the writer of historical fiction, because I got to pull her from this supporting role, put her center-stage in her own story, and use the historical facts to imagine her life through my novel."

Not only that, but Pataki says she's been given the "opportunity now to go back and re-examine history from the perspectives of the really fascinating women who were there." Which is something Pataki thrills in, and has made a career of. In addition to Clary, Pataki has also brought Peggy Shippen Arnold and Elisabeth of Austria to life on the page. Elisabeth's story, told in Pataki's The Accidental Empress and Sisi: Empress on Her Own, has been optioned for television, with The Crown's Amy Jenkins adapting it for the screen.