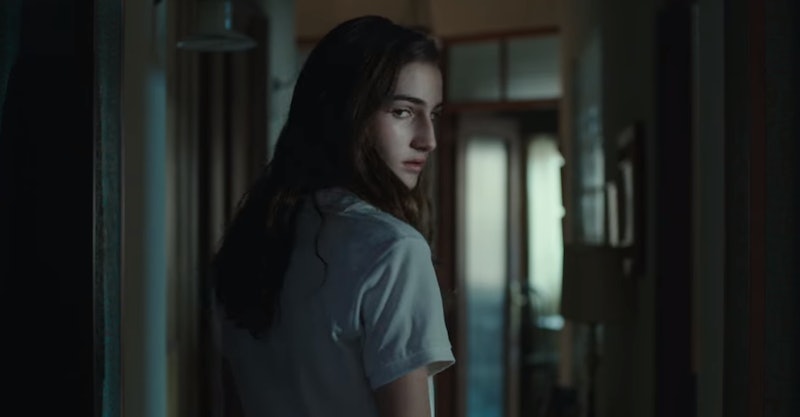 If you've been on Twitter this week, you've likely heard about the Netflix movie that's reportedly so scary some people can't make it to the end without slamming their laptops shut. That movie is Veronica, the based on a true story horror movie that is giving the internet nightmares. But how much of Veronica's true story is actually, you know, true? While director Paco Plaza has been candid about the ways in which he melded fact and fiction, this is one time when the reported real-life story behind the scares may actually be spookier than what made it to the screen.

Horror movies often come with the "inspired by a true story" label, but in most cases further investigation will prove that there's only a grain of truth in the scary events that make it onscreen. In many ways, the same can be said for Veronica. The main character and her adorable siblings never actually existed, and the events in the film are heavily fictionalized. However, the police documents that follow the credits are from the Vallecas Case, a chilling series of unexplained events that happened to a family in Spain in the early '90s.

According to Newsweek, a young teen named Estefania Gutierrez Lazaro did fall ill after reportedly having a seance at school. The seance is said to have been interrupted by a nun who broke the Ouija board, and afterwards the young woman reportedly suffered for months with seizures and hallucinations. She died at a hospital in Madrid in 1991, but there doesn't appear to be an official cause of death — at least not one that has been made public by her family.

Lazaro's unexplained death is tragic, but it bears little resemblance to the demon-fueled nightmare that Veronica finds herself in after playing with a Ouija board during a solar eclipse. However, the Lazaro family's troubles only intensified after their daughter's death, and it's the events that followed that are documented in the police report shown at the end of the movie.

As reported by Newsweek, three officers and Chief Inspect of the National Police, Jose Pedro Negri, all claim to have witnessed disturbing events in the Lazaro family's home. They claim to have seen the door of an armoire open suddenly in an unnatural manner, and a figure of Jesus separated from a crucifix. The Sun further reports that the family reportedly heard whispers in their home after their daughter's death, and experienced other unexplained phenomena including electrical anomalies and slamming doors. Because there is a police report that includes detailed unexplained experiences by the officers, the story has become something of a legend in Spain — there are even TV specials about the case.

In Veronica, the action moves swiftly and the demonic happenings are unquestioned, but for the real-life family whose story inspired the film, the heartbreak and unexplained events stretched out over years. Whether or not there's any truth to the supernatural aspect of the case, it's chilling to imagine what kind of mental toll the family went through before they finally moved to a new home.

During a Q&A at the Toronto Film Festival, Plaza told the crowd that the popularity of the story in Spain actually gave him a greater sense of creative freedom when it came time to put a fictional spin on the true events. The director said,

"In Spain it's very popular, this story, because it is, as we say in the film, the only time a police officer has said he has witnessed something paranormal, and it's written in a report with an official police stamp and it's really impressive when you look at it. But I think when we tell something, it becomes a story, even if it's in the news. You only have to read the different newspapers to know how different reality is, depending on who's telling it. So I knew we were going to betray the real events. I just wanted to make a whole vision… but the whole story of Veronica and the sisters and Antonito, this little Marlon Brando with glasses, it's all a vision."

Veronica may not be real, but this horror movie's true story is one that will keep you up at night thanks the tragedy and mystery surrounding Lazaro's death and the events that followed.