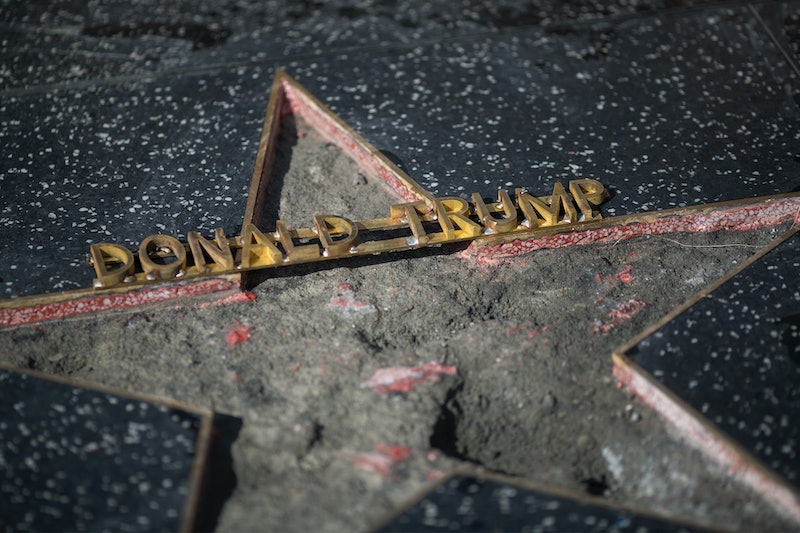 As a form of destructive protest, some anti-Trump activists have taken to vandalizing the president's sidewalk star on the Hollywood Walk of Fame. Two men have already been convicted of trying to destroy the landmark, and the most recent Trump Hollywood star vandal's sentence was announced on Wednesday — three years' probation, 20 days of community labor, and just one day in jail.

In July, Austin Clay turned himself in to Los Angeles police after smashing Trump's sidewalk star with a pickax, and was subsequently booked on suspicion of felony vandalism. At the time, 24-year-old Clay pleaded "not guilty," calling his crime a "rightful and just act." He has since changed his plea to "no contest," according to the Los Angeles District Attorney's office.

"I think that there was urgency behind my actions," Clay said in August. "I feel like I’ve been called to do what I did."

A felony vandalism conviction can come with a jail sentence of up to three years. Instead, in addition to Clay's relatively short incarceration period, he was ordered to attend psychological counseling and pay a fine of $9,404.46 to the Hollywood Chamber of Commerce, according to The Hollywood Reporter.

Clay's symbolic attack on the president follows in the footsteps of another man, 52-year-old James Otis, who bashed in the star with a sledgehammer in October 2016, following the release of the infamous Access Hollywood tape. Otis was also booked with felony vandalism, but received a similarly light sentence — three years probation, 20 days of community service, and a fine. Otis apparently also felt some solidarity with Clay after he was charged for the same crime, reportedly stepping up to pay Clay's $20,000 bail in July.

Other protesters have taken to Trump's sidewalk star, though not all have been quite so destructive. In September, an artist who goes by "Plastic Jesus" attached metal bars over the star, apparently in a symbolic effort to imprison the president.

"There have been calls to jail Trump since the day he was elected," the artist told Huffington Post, "and today he was certainly put behind bars." In 2016, Plastic Jesus pulled a similar stunt, placing a 6-inch- tall wall around the star, as a way to represent the border wall with Mexico that Trump promised during his presidential campaign.

About 30 sidewalk stars are awarded to notable entertainers each year by the Hollywood Chamber of Commerce, but they're not exactly gifted. Once a celebrity is nominated, the Chamber checks with them to make sure they actually want a star, and then either the person nominating, or the recipient themselves, has to pay $40,000 for the star to be installed. That fee covers installation, maintenance, and repairs for the iconic plaque.

In August, amid the multiple incidences of vandalism to Trump's star, the West Hollywood City Council unanimously signed off on a resolution to remove his star completely. "Getting a star is a privilege; it’s not a right," West Hollywood’s Mayor Pro Tempore John D’Amico, said. "You have no right to a star... just because you’re famous."

The star isn't actually in West Hollywood, so the resolution was more of a disapproving statement than a directive. The Hollywood Chamber of Commerce has condemned the vandalism, but so far refused to remove stars from the walk, saying that regardless of who they represent, they are a part of the history of the area.