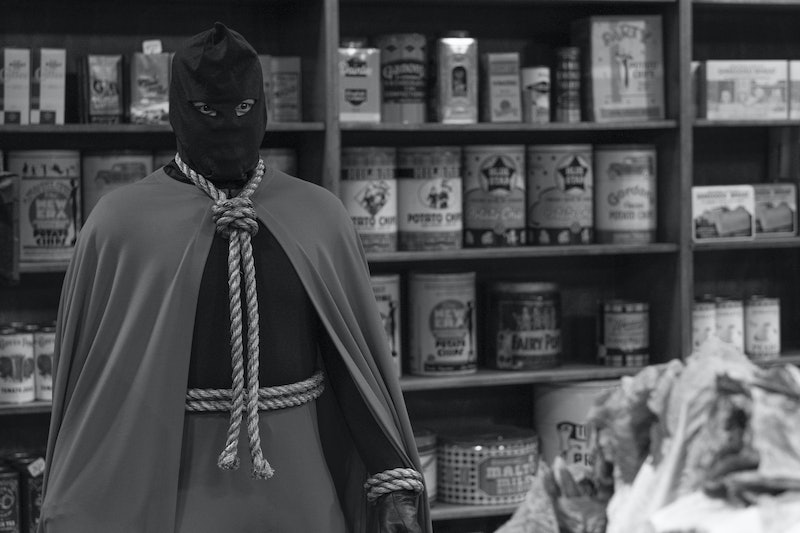 Spoilers for Episode 6 of Watchmen. Watchmen is a show rife with historical references, Easter eggs from the comics, and meta commentaries about literature and music. It's a very smart show, to put it simply, and Episode 6 threw in one extremely sly reference that most people may have missed. Fred, the racist guy who torches a Jewish deli and houses the Ku Klux Klan in his warehouse, just so happens to share a name and appearance with a real historical figure: Fred Trump, the father of Donald Trump. We're not saying for sure that Watchmen made a Trump reference, but we're pretty sure Watchmen made a Trump reference.

Will Reeves, aka Hooded Justice, first runs into Fred when he spots Fred blatantly lighting a molotov cocktail at night, which he casually tosses into a Jewish deli before strutting off. "I heard they have a rat problem, maybe one chewed through the wires," he tells the flabbergasted Will, who immediately arrests him. After Fred hurls slurs at Will at the police station, he flashes the Cyclops sign — which looks exactly like OK hand sign, now listed as a white supremacy symbol — to Will's white coworkers, who later release Fred with no questions asked.

Will continues to have bad run-ins with Fred, and finally Will breaks into Fred's warehouse as Hooded Justice and discovers Fred is a member of the Ku Klux Klan/Cyclops, and they're creating hypnotic propaganda to fuel Black-on-Black crime. When Hooded Justice bursts through the front room, there's Fred in his grocery store, holding a shotgun. The camera focuses on a case of lettuce in the foreground, visually connecting Fred to the 7th Kavalry of present day Watchmen. And the name on all Fred's business dealings? "F.T. & Sons," which reads suspiciously like Fred Trump and his sons.

But what does this have to do with Fred Trump? Well, besides the obvious name similarity, when Donald Trump was running for president it came out that his father Fred Trump one of seven individuals arrested in May 1927 at a Klan rally in Jamaica, Queens. A 1927 New York Times article simply named Fred Trump and stated that he was released without charges. When New York Times interviewer Jason Horowitz asked Donald Trump about it, he vehemently said "it never happened" four times. Yet per Vice, several other newspaper clippings corroborate the NYT report, with many claiming that all those arrested, Fred Trump included, were wearing Klan attire.

Back then, the story was just a blip on everyone's radar though, and the Trump This!: The Life and Times of Donald Trump book reports that Fred Trump went on to successfully open — get this — a supermarket store named "The Trump Market." Fred Trump later moved into real estate, and in 1973 was rocked with more scandal when he was formally accused of racist rental practices. Are you picking up what Watchmen is putting down?

Just to further connect the dots, the way Fred's actor is styled is also very reminiscent of Fred Trump himself, who sported a prominent mustache in his later years.

Ultimately we can't know for sure if this was all very purposefully done or if it's all just wild coincidence that the grocery owner who is a member of the Ku Klux Klan also happens to look like and share a name with a real life historical figure who also owned a grocery and was an alleged Klan member. (To-may-to, to-mah-to.) It does, however, further the overall themes of Watchmen, and how the show serves as a scathing commentary about today's society and politics.

Watchmen is all about legacy and how the past defines us, and America is a country that was built by genocide, colonization, and the enslavement of an entire community — a fact that many Americans don't like fully acknowledging or reckoning with. By using this maybe reference, Watchmen draws a line from Fred Trump's alleged racism to Donald Trump's racist presidency, and from the old Ku Klux Klan of Fred Trump's time to the present day alt-right. In the same way, Will's Nostalgia pills show Angela how the Ku Klux Klan just evolved into Cyclops, and how Cyclops has now evolved into the 7th Kavalry — the names change, but their views and goals remain essentially the same. Fiction reflects reality and vice versa.

So is this all a for sure reference or no? We leave it up to you to decide, but dang is that mustache not pretty obvious.