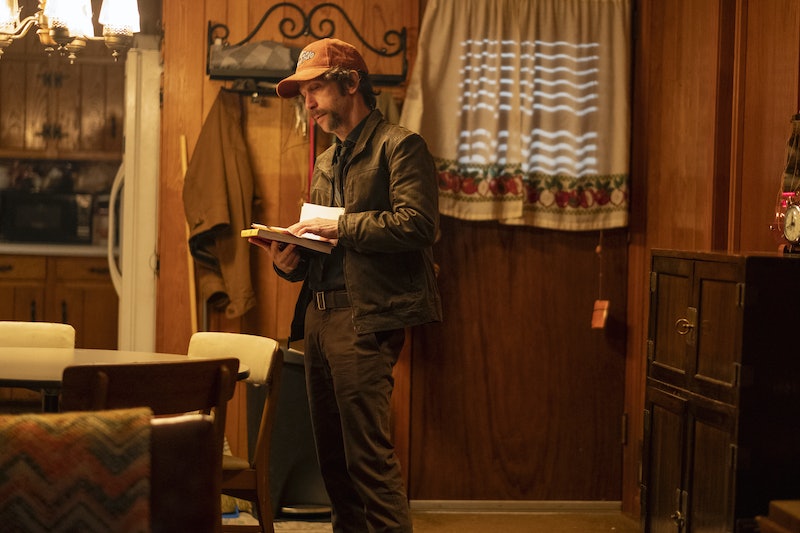 Spoilers ahead for HBO's The Watchmen. It always feels like HBO's Watchmen is walking a fine line between being a grounded tale about trauma and legacy and a colorful, zany comic book show, but Episode 5 really tipped over into weird territory. At first concerned with Looking Glass' backstory, the episode soon shows him stumbling upon what the Seventh Kavalry is planning in Watchmen — and now we're more confused than ever.

The episode begins with the reveal that Looking Glass, AKA Wade Tillman, was within the psychic blast radius when antagonist Adrian Veidt teleported his engineered squid into downtown New York City in 1985. Despite being in a carnival funhouse in New Jersey, the blast kills everyone around Wade, and now he suffers from PTSD. He runs constant bunker drills, and his ever-present shiny mask is actually made from reflectatine, a material meant to protect his brain from another psychic attack. It's also in the inner lining of his cap, and at night, Wade just sleeps in his mask.

Obviously this doesn't make Wade an easy man to date, but he's hopeful when he meets a mysterious woman at his extra-dimensional trauma support group. Their flirtation is short-lived though when he spots her driving away in a lettuce-laden pick-up truck, the same one that a Kavalry member was in when he killed the cop in Episode 1. Wade follows her to a warehouse, and what he discovers inside is absolutely bonkers.

The church is a fake

Earlier in the episode, Laurie Blake tasked the police force with finding the church that the Seventh Kavalry filmed their propaganda in so they could hopefully find where the Kavalry is holed up. Wade discovers it's not a church at all: it's just a set within a warehouse, complete with rigged lighting and audio — meaning the Seventh Kavalry members are more calculating than the cops first thought, and leads to other questions. Have any attacks been staged? Are some of the members just actors?

The 7th Kavalry are opening portals

Another major reveal is that the Seventh Kavalry are not all uneducated rednecks, which is what the cops first believed when they raided the low-income Nixonville park. Instead, some of them have prestigious jobs, like "radiologist," and they're working together to open a high-tech portal — what Wade calls a "CX924 teleportation window." It's clear the portal can manipulate space — they toss a basketball in and it pops out somewhere else! — but does it also manipulate time?

If that's the case, that makes the portal the equivalent to what Dr. Manhattan can do, and having that tech in the hands of a terrorist group doesn't bode well for Angela Abar and Laurie Blake.

They're led by Senator Keene

The Kavalry isn't working alone on this, either. Senator Keene finally reveals himself as the Kavalry leader to Wade, and tells him that Chief Judd Crawford was also a leader before he was hanged. "“I’m not a murderer. I’m a politician," Keene explains to Wade. "I came down here to assume leadership of these idiots to make sure that [the White Night] never happened again."

Keene's involvement with the Kavalry basically solidifies everything that Will was trying to communicate to Angela before he disappeared: white supremacy is like a parasite, and it's infected everything from law enforcement to the political institutions in Watchmen. Keene's presence does little to assure Wade, or the viewers, that he's got things under control. If he claims he's such a good guy, why does he want to open another portal, and where, and how big? Considering Keene is running for president, does this have something to do with unseating the liberal President Robert Redford, and installing more men like himself in seats of power?

They know about Veidt's hoax

What's driving Keene and the rest of the Kavalry is the teachings of Rorschach, who mailed his findings to a fringe right-wing publication before his death at the hands of Dr. Manhattan. While Rorschach's accusations that Veidt planned the apocalypse was written off as just a conspiracy theory, Keene brings proof to the Kavalry that Rorschach was right.

Veidt actually mailed a video of himself to President Redford boasting about how he planned the whole squid attack to achieve world peace, and how that inevitably led to Redford's presidency, which has lasted for 28 years (Nixon abolished term limits). Keene was shown the video when he became head of the appropriations committee, and it took weeks for him to pirate the video to show the entire Seventh Kavalry.

It'd be unsurprising if Keene and the rest of the Kavalry view that as a stolen election, then — and they have a bone to pick with Redford, who's passed numerous policies aimed at addressing America's racist past, like the Redfordations, essentially the Watchmen equivalent of reparations.

So maybe Keene want to use the portal to make sure Veidt never unleashes his squid, or that Redford is never elected at all?

They're maybe tied to Lady Trieu

Before Wade goes into the warehouse, he peeks into the lettuce truck and pulls out a metal case with the Trieu Enterprises logo on it. This would suggest that the Seventh Kavalry is working with Lady Trieu and Will Reeves. That's a pretty yikes connection to make though, considering both characters have suffered under racism in different ways.

It's possible this is like the plot of Iron Man, where Tony Stark finds out his company is selling weapons to terrorist organizations. It's hard to imagine Lady Trieu not knowing exactly where all her products are going like Tony did, but maybe she's distracted with building the Millennium Clock and whatever plan she has with Will?

Another possibility is, like the church stage, the box is yet another misdirection. Maybe?

They're trying to convert Looking Glass

The woman brings in Wade because she believes he'll be sympathetic to their side. It's not difficult to see why: when Angela asked Wade last episode if he knew that Chief Judd was a racist, he simply responded, "He was a white man in Oklahoma."

Wade does care about Angela in his own way, or else he wouldn't have given her up to Laurie. ("Serve her up so I don’t have to ask these racist Okies to go to her house and kill her and her whole family," Keene tells Wade.) Wade clearly didn't do something right though because the episode ends with the Kavalry storming his house with guns.

Is Wade a dead man? Did he tip off Laurie or Angela in some way and they found out? Or is Wade going to be blackmailed, or convinced, into joining them? And most importantly, can next week's episode get here any faster?