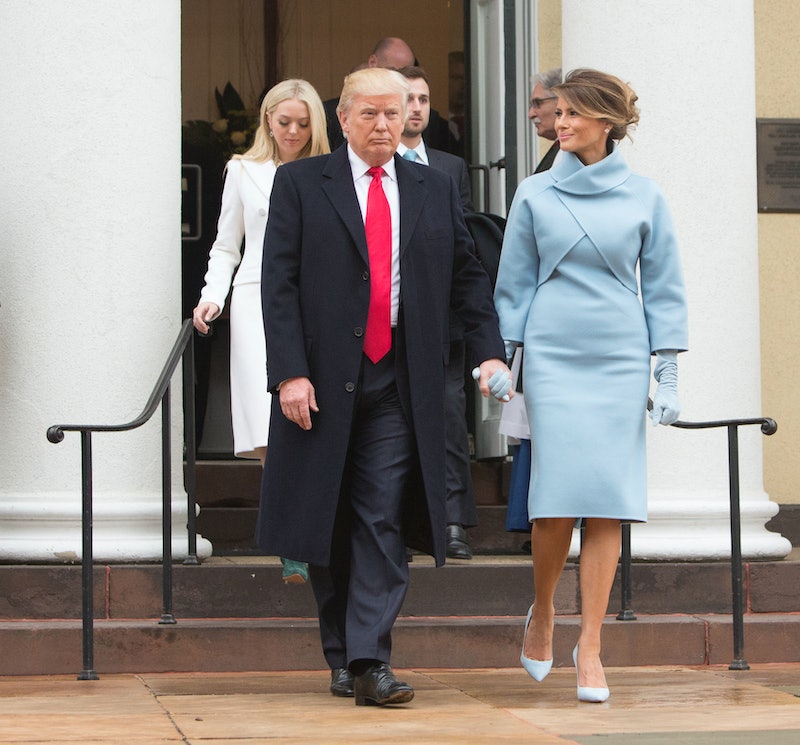 If Friday's events and the next four years have you worried for the future of your country, this excerpt from The Trump Survival Guide will help you get through the day, at the very least. Author Gene Stone — who also wrote The Bush Survival Bible — and publisher Dey Street Books have provided Bustle with an excerpt on literal survival: how to enroll in a health care plan and fight to keep it.

Like tens of millions of Americans, I rely on the Affordable Care Act (ACA) to make health care accessible and affordable for me. My chronic illness alone costs a minimum $4400 per year to manage, but a subsidized insurance policy that covers all of my doctor visits and prescriptions costs less than $600. Thanks to the ACA, not only am I able to stay alive, but I can also save money, contribute to the economy, and afford healthful things like good food and a basic gym membership.

Trump and the GOP have made it clear that they intend to "repeal and replace" the ACA, and the Republican-controlled Senate voted 51-48 to begin defunding and dismantling the health care law on Jan. 12, more than a week before the 45th POTUS was sworn in. But ridding the U.S. of affordable health care might be the most foolish move Republicans could make. Donald Trump is the least-favored incoming president in modern history, and is even less popular than the ACA according to a Fox News poll, so "repeal and replace" seems to be nothing less than political suicide for the GOP.

Whether it's a bad move on their part or not, we must prepare for the incoming administration to blow up all the progress we've made over the last 8 years, with no consideration for anyone else. To that end, The Trump Survival Guide is here to help.

WHAT YOU CAN DO

SIGN UP FOR OBAMACARE. If you want Obamacare to last, and you don’t have health insurance, sign up now, as hundreds of thousands of Americans have since the election. The more people who can potentially lose coverage, the more politically challenging it is for Trump and the Republican congress to repeal it. Open enrollment lasts until January 31, 2017.

DONATE TO OR VOLUNTEER FOR ENROLL AMERICA. Enroll America is the nation’s leading health care enrollment coalition, working with more than 6,700 partners in all fifty states to create cutting-edge tools, analyze data, inform policy, and share best practices in service of its mission: maximizing the number of Americans who enroll in and retain health coverage under the Affordable Care Act. Since the election, it has doubled down on its efforts to make it as politically difficult as possible for Trump to repeal Obamacare (www.enrollamerica.org).

DONATE TO OR VOLUNTEER FOR FAMILIES USA. Families USA, one of the key advocacy groups that helped pass the Affordable Care Act in 2009, is dedicated to the achievement of high-quality, affordable health care and improved health for all. Families USA advances its mission through public-policy analysis, advocacy, and collaboration with partners to promote a patient- and community-centered health system. Ron Pollack, the executive director of Families USA, is forming the Coalition to Keep America Covered, which focuses on educating people about the effects of repealing Obamacare. The Coalition is prepared to wage a multiyear campaign to keep Americans covered by any means necessary. In the meantime, sign the petition to protect America’s health coverage (http://familiesusa.org/protect-americas-health-coverage).

It can be difficult explaining why Obamacare is so vital without sounding wonkish, but you can keep it simple: Without it, twenty-two million people will lose their health care. Without it, the sick will be unable to find the care they require. Without it, the most vulnerable people will not be able to afford what many consider a basic human right. If your friends and family agree this shouldn’t happen, urge them to join you in calling your representatives and donating to the above organizations.

If Obamacare is repealed, do not panic. Nothing is likely to happen overnight. If you receive subsidies through exchanges or are enrolled in the Medicaid expansion, you will not lose your coverage immediately. If you qualify for traditional Medicaid, you should not be affected by an Obamacare repeal. (However, Trump and Republicans do want to drastically overhaul Medicaid and Medicare. See the chapter on Entitlement Programs on page 63 for more information.) During the transition period, you have time to work with the above organizations to figure out your next steps. More important, you have time to fight back.

From the book THE TRUMP SURVIVAL GUIDE by Gene Stone. Copyright © 2017 by Gene Stone. On sale now from Dey Street Books, an imprint of HarperCollins Publishers. Reprinted by permission.