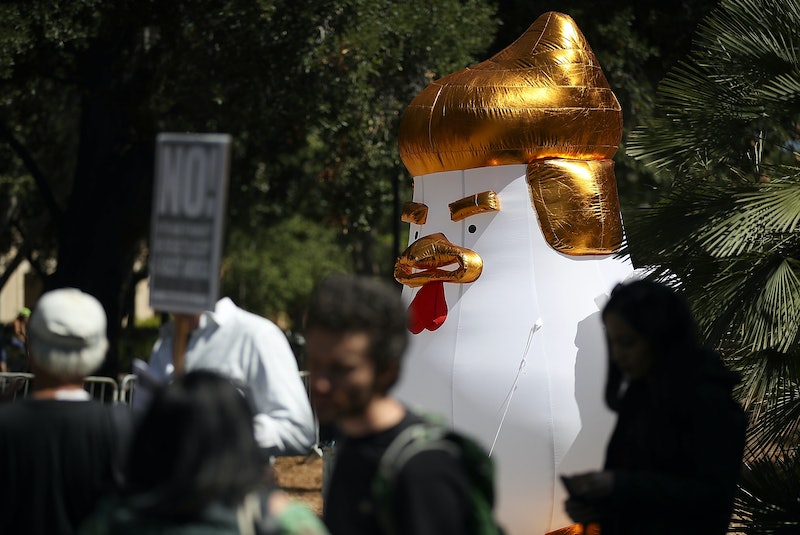 The New York Times published an explosive investigative piece on President Donald Trump's wealth Tuesday, suggesting that POTUS is not the self-made billionaire he claims to be. Now, activist groups are reviving their demands that Trump release his tax returns. And they've decided to welcome back an old friend: the Tax March Chicken. Yes, the Trump "Tax March Chicken" made a comeback in D.C., this time at the National Mall.

America was first introduced to the 30-foot-tall inflatable chicken at the Tax March last year, where protesters called for the president to release his tax returns. The Tax March Chicken, or Chicken Don, is meant to insinuate that Trump is too "chicken" to actually release them (Trump repeatedly said he'd release his tax returns during the 2016 campaign, but never did). Since then, Chicken Don has made various other appearances around the United States, once dressed as a criminal on his way to Alcatraz.

With a golden pomp of hair, beady eyes, and feathered hands gesturing outrageously, the bird is supposed to resemble Trump himself. The design is actually based on a statue outside a mall in Taiyuan, China, erected as a comedic PR stunt partially celebrating the Chinese zodiac's year of the rooster and partially mocking the new U.S. president.

Now, the statue's U.S. balloon counterpart is at another kind of mall, in full view of our country's leadership. Activists inflated Chicken Don on the National Mall Wednesday, just a day after the New York Times report was published.

The Times report that emboldened Tax March to set up Chicken Don on Wednesday alleges Trump "participated in dubious tax schemes during the 1990s, including instances of outright fraud." While the statute of limitations may be up for any criminal charges Trump could face as a result of this report, it does throw into question his image as a self-made billionaire. Trump's lawyer has denied the allegations on his behalf.

It's a place no president has been before: Trump is the first to withhold tax returns. While on the campaign trail he said he'd release the documents following the end of an audit, but on Wednesday Press Secretary Sarah Huckabee Sanders said she's "not aware of any plans" for Trump to release his tax returns. She called the Times report a "totally false attack based on an old, recycled news story."

So that leaves us here, with the president of the United States being taunted by an inflatable version of himself as an angry chicken. And of course, Chicken Don has a Twitter account.

"Who's the big chicken now," Don asked Trump after nesting himself into the National Mall Wednesday.

The group responsible for him is Tax March of the Not One Penny coalition, self-described on their website as a "growing national movement that extends far beyond one day of marching." They aim to close tax loops for the wealthy and build an economy that benefits all working people, promoting their message "through on-the-ground organizing nationwide, representation in town halls, and amplification on social media and in the press."