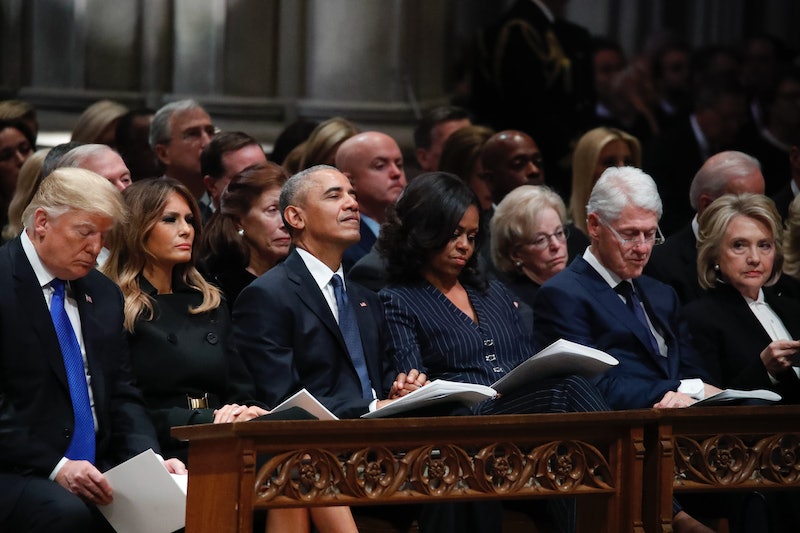 Mourning a death is one of the rare occasions that can bring every living president together under one roof, and Wednesday was no exception. The Trumps' body language at George H.W. Bush's funeral while sitting in the same row as the Obamas, Clintons, and Carters put their feelings about each couple on full display.

"The main story in all this body language is there is a real ice-cold war between the Trumps and the Clintons," body language expert Lillian Glass tells Bustle. "With Obama there’s a cordiality, but you really see this severe ice storm [with the Clintons]."

Video of the funeral shows President Donald Trump and First Lady Melania Trump walk in and join the former presidents and their wives in the front row. As the Carters are sitting the furthest from the Trumps, they're logistically left out of the awkwardness — but the Obamas and Clintons are in the thick of it.

Hillary Clinton doesn't even glance over when the current president, who frequently claimed she should be locked up, sits down next to the Obamas. While Melania leans over to shake Bill Clinton's hand before sitting down, President Trump doesn't appear to acknowledge that either Clinton is in the room.

"Hillary is the one who is by far the least interested," says body language expert Traci Brown. "Bill kind of looks over waiting for his handshake and he doesn't get an acknowledgement. And then Hillary doesn’t even look at all."

Body language isn't an exact science and many factors can impact a person's appearance and movements, but the fact that Melania shook President Clinton's hand while her husband didn't signals that she's acting as a bit of a buffer between everyone, according to the experts. Glass analyzes that, between the two Trumps, Melania "is the diplomat here."

Shaking hands with the former White House occupants before sitting also shows more respect on Melania's part, Brown says, whereas President Trump sits down and then proceeds to lean over his wife to shake hands with the Obamas.

"He does look Obama in the eye, but he’s sitting down," Brown explains. "Michelle, I’m not sure she looks him in the eye, and that smile is more of a scowl."

The Trumps have expressed their condolences to the Bush family all week, including a tweet from the president Wednesday morning that said he was "looking forward to being with the Bush family" later that day. "This is not a funeral, this is a day of celebration for a great man who has led a long and distinguished life. He will be missed!" President Trump tweeted.

His demeanor at Bush's funeral hinted that Trump genuinely liked the former president, as Glass notes that he is the "kind of guy who wears his emotions on his sleeve." But his body language toward the Obamas appears more cordial than friendly, and his behavior toward the Clintons — well, there isn't much, because he simply ignores them.

President Trump has been vocal about his disdain for former Secretary Clinton since they faced off in the 2016 election, and Wednesday's funeral confirmed that those feelings have not changed on either side. As Glass put it: "There is no love lost."