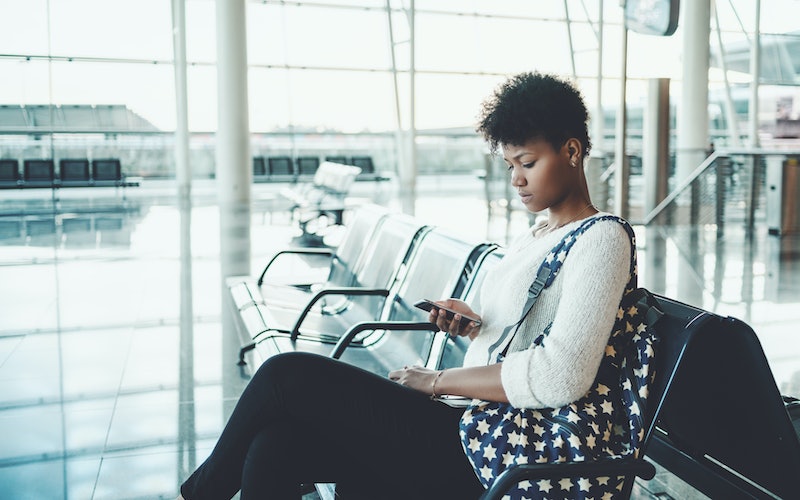 Travelers, lend me your ear. If you're hopping on a plane to escape to faraway places anytime in the near future, you're going to want to brush up on the Transportation Security Administration's updated rules regarding what you can bring on the flight with you. If you're packing powder in your carry-on, moving forward, you're limited to no more than 12 ounces, according to CNN, which is roughly the size of a standard can of soda. For powders weighing more than 12 ounces, you should put them in a checked bag. TSA spokesman Michael England says this new rule will officially go into effect for international flights headed for the United States starting June 30.

Many of us use powdered substances in our daily lives, sometimes in the form of baby powder, cosmetics, and protein powder — that last one's gotten me the side-eye going through security a few times. Just like liquids and shoes, powder wasn't always a huge issue to take through security, but as CNN reports, there was an incident in Australia last July when someone tried to unsuccessfully blow up a passenger plane with an explosive device, which forced the TSA to tighten things up even more. Fortunately, the device didn't get past the check-in desk.

However, the scary incident added to already growing concern about explosive devices and powdered substances.

When items are packed in your carry-on, they'll sometimes be put through extra screening and security measures. Should TSA not be able to determine what it is, they might tell you to put it in a checked bag, but more likely, you'll have to throw it out — which is definitely news you don't want to receive right before you're about to jet off.

This isn't the first time we've heard of this. CNN points out how back in April, the TSA announced it would be more strongly regulating powders and also food, requiring passengers to separate them from their other belongings because they can obstruct the view when baggage goes through the X-ray machine. Plan accordingly, because you likely won't be able to get away with what you used to, this coming from the girl who likes to store the contents of an entire candy shop in her purse.

Rest assured you can still bring powder in your carry-on without the TSA automatically calling the bomb squad (been there, done that!), but you do need to be cautious in weighing it out beforehand and properly packing it. A small food scale will do the trick.

If you're traveling with protein powder, minimize the space it takes up by putting it in a plastic bag with "protein powder" written on it, and maybe even double bag it to avoid any accidental spills. Protein powder adds up quickly, and if you use a scoop a day, 12 ounces might not suffice. Remember, you can bring more, but it has to go in a checked bag.

If it's powdered cosmetics you're dealing with, these will very likely be well under the 12-ounce maximum. However, if you're approaching the limit, you might want to consider turning to a few crafty travel hacks for packing your luggage. For instance, make-up products fit into contact lens cases pretty nicely — both powders and cream products. (Remember, if you're bringing compacts with you, put a cotton round inside before you shut it. This will prevent the make-up from cracking and breaking.)

While getting through security can be a real pain, these new measures really aren't that big of a deal. In fact, many airlines were already abiding by these rules voluntarily, England tells CNN. Besides, we're talking about carry-on luggage, which is often reserved for the essentials. Be realistic about how much make-up and protein powder you truly need in the overhead storage container.

If you're bringing so much that 12 ounces isn't enough, it's probably safe to put it in your checked baggage and move on with your life. Remember, it's for your own safety and everyone else's.