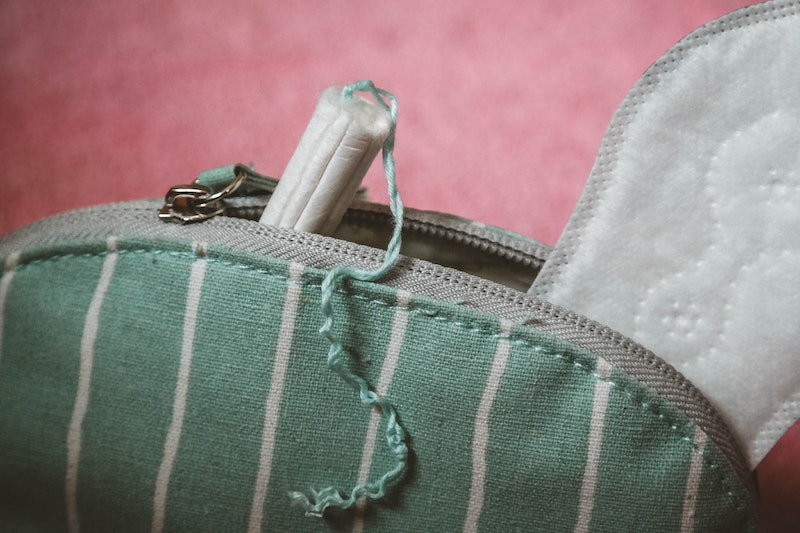 For two decades, campaigners have been fighting to get rid of the tampon tax; a tax that sees sanitary items classed as luxury products. Now, the chancellor is expected to announce the end of the UK's tampon tax. According to the BBC, chancellor Rishi Sunak will tell the nation the 5% VAT on period products will be abolished in Jan. 2021. In other words, as soon as the Brexit transition period ends.

Established in 1973, per Stylist, the tampon tax (which was originally 17.5%) has already seen significant reductions. Campaigners, spearheaded by Labour MP Dawn Primarolo, managed to decrease it to 5% in 2001. But anger has remained that people are expected to pay more for what should be regarded as an essential item.

Dropping the tampon tax means people who have periods will save an average of £40 over their lifetimes, the BBC reports. The price of a 20-pack of tampons is expected to reduce by 7p while the cost of 12 pads should decrease by 5p.

The government has long blamed the EU for the delay in removing the tax. Under EU law, member states were unable to lower the tax below 5%, per the Guardian. However, in 2016, then-Prime Minister David Cameron managed to change the legislation. He also noted it would take years to implement zero VAT, the Guardian reports, although it's thought this would have happened in Jan. 2022.

According to previous reports, the tampon tax almost derailed Brexit negotiations. Per iNews, it looked like Northern Ireland was still going to pay VAT on sanitary items until a deal was made.

So hearing that people in the UK now have less than a year to wait should be a cause for celebration. Some women's organisations, however, aren't jumping for joy.

Since 2015, funds from the tampon tax have been redirected to various women's charities, per Stylist. The government has said the £47 million gained so far and anything added until the end of 2020 would still go to these causes.

But campaigners are concerned about the future of women's funding. "This is a great small step in the right direction," said Vivienne Hayes, CEO of Women's Resource Centre, in a statement. "Now let’s see the £700 million collected from women going back to where it was promised — women’s health and support charities.

"Given the fact that women’s health and support charities save the government approximately half a billion pounds every year, that’s a whopping £20 billion in the time that £700 million was collected in VAT. So we think it is only fair we get that debt paid back to our life-saving charities.”

The future of the tampon tax fund isn't the only controversy surrounding it. In April 2019, it was accused of failing to adequately support women's issues after specialist groups lost out on funding in favour of big charities with broader focuses. (At the time, the Department for Digital, Culture, Media & Sport said all chosen projects benefit women and girls. Bustle has reached out to the department for further comment.)

Sunak's announcement is expected to take place in the March 11 Budget. Only then will we know whether we're really saying goodbye to this unnecessary tax.