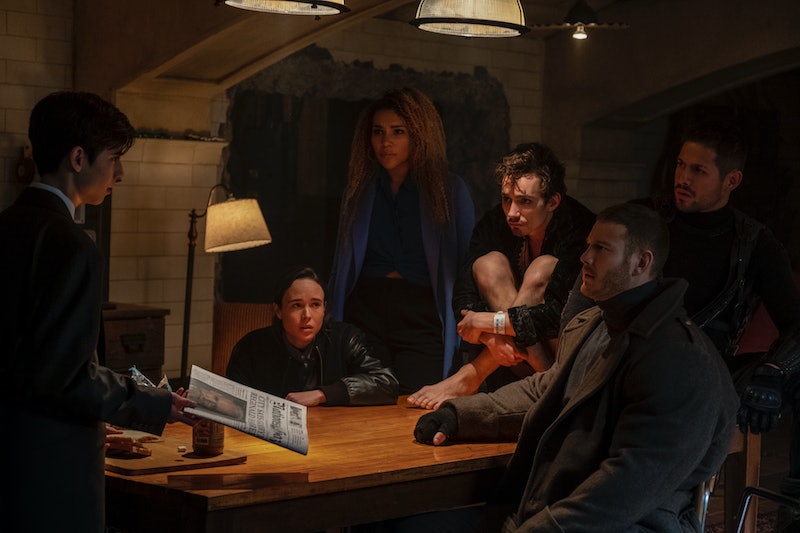 The world may have come to an end during the Season 1 finale of The Umbrella Academy, but the Hargreeves children still have more work to do. The series has been granted a second season by Netflix and while that news alone is definitely something to celebrate, The Umbrella Academy Season 2 renewal actually might also answer a very important question posed at the end of the Season 1 finale.

The series, which is based on the Eisner Award-winning comics from Gerard Way, finished its freshman run with the anticipated apocalypse finally coming to fruition. But just when all hope feels lost, Number Five suggested that they all join hands so that he can attempt for all of them to travel back in time together in order to get another shot at saving mankind. However, as he began the process, Luther, Diego, Allison, Klaus, and an unconscious Vanya all started to morph into their younger forms. Then, poof — just like magic, they disappeared to parts unknown.

Obviously, this left viewers with a ton of questions, but one that immediately stood out from the rest was whether or not the original, adult actors would be returning for a potential second season. Now, we can rest easy about that particular worry.

In a press release obtained by Bustle, the streaming service was able to shed some light on the situation. Along with news of the renewal, Netflix revealed that all of the main cast members would be returning for Season 2. "The cast set to reprise their roles include Ellen Page, Tom Hopper, David Castañeda, Emmy Raver-Lampman, Robert Sheehan, Aidan Gallagher, and Justin Min," the statement read.

With that information in mind, it seems the Hargreeves gang won't be reverted back to their younger selves for very long. So the transformation we saw at the very end of the time-traveling process will not be permanent. This is somewhat surprising, given that Number Five's childhood state seems unfixable at this point in time. Perhaps he'll remain in his child-like form while the others turn back to the adult versions of themselves. Either way, you can rest assured that the original actors you came to know and love in Season 1 will be back when the series returns.

However, that still leaves the fate of some characters up in the air. The press release also read that: "Additional casting news for season two will be announced at a later date." So whether or not Mary J. Blige's Cha-Cha (who had a one-year deal with the series, according to The Hollywood Reporter) and Cameron Britton's Hazel will also be back, remains to be seen. Regardless, though, it's just good to get a little clarity on the situation and become even more excited for what the new season has in store.

Much like the first season, The Umbrella Academy Season 2 will consist of 10 episodes with production slated to begin this summer in Toronto, Canada. No official premiere date has been announced, but given what we know so far, it's sure to be well worth the wait.