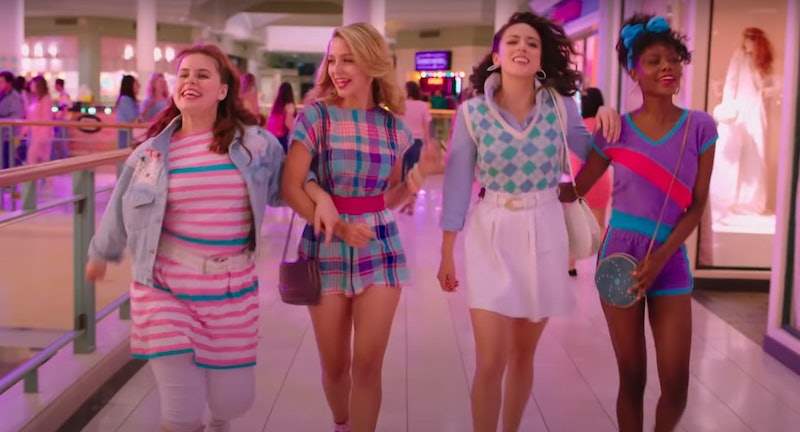 Get ready for all the '80s nostalgia (and slang) that you could possibly dream of in the new trailer for Valley Girl starring Clueless favorite Alicia Silverstone. The long-gestating remake of the 1983 cult classic is getting a digital release on May 8, two years after its projected 2018 premiere. Don't let the delay put you off this technicolor ode to big hair, the mall, and young love, though, because the new Valley Girl comes with a stacked cast and elaborate musical numbers set to the ultimate '80s soundtrack.

In addition to Silverstone, the musical also stars Jessica Rothe (Happy Death Day), Josh Whitehouse (The Knight Before Christmas), Chloe Bennet (Marvel's Agents of SHIELD), Mae Whitman (Good Girls), and Ashleigh Murray (Riverdale). Rothe plays Julie, the perfect Valley girl who falls for Randy (Whitehouse), who hails from the other side of the hill and spends his nights hanging out on Hollywood Boulevard. Silverstone plays an older version of Julie, who is recounting her teenage love story to her brokenhearted daughter who thinks parents just don't understand.

"Stop, you were singing and dancing on a fountain?" her daughter asks in the trailer as Silverstone's Julie begins recounting one of her colorful musical mall moments. "That's how I remember it," Julie replies.

The original Valley Girl starring Nicolas Cage and Deborah Foreman was less of a frothy, fun musical and more of a earnest Californian take on Romeo and Juliet. Since the cult favorite recently became available to purchase digitally for the first time, viewers can easily plan a double feature night for maximum '80s goodness. And that's something that the director of the 2020 version seems to encourage.

Rachel Lee Goldenberg, who is best known for directing the Will Ferrell and Kristen Wiig Lifetime movie A Deadly Adoption, expressed nothing but reverence for the original in a new interview with Entertainment Weekly. In fact, it was the chance to stylistically switch between two vastly different worlds that drew her to the project. "I love playing with genres," Goldenberg told EW. "The juxtaposition of the bright, poppy Valley world and the dirty, grimy punk world was an exciting visual idea for me."

Julie and Randy's love story is set to transport viewers back to a simpler time — one that happened to have a rocking soundtrack. Valley Girl will include elaborate musical numbers set to classic songs like the Go-Go's "We Got the Beat" and Cyndi Lauper's "Girls Just Want to Have Fun." The musical interludes and authentic '80s slang (the movie hired a dialect coach to help the cast nail the sound of the era) are set to create a total throwback experience. As Whitehouse explained to EW, "The original was a little rougher around the edges, in an authentic way. Ours definitely has a lot more sparkle to it."

More like this
The 'Scream 6' Trailer Shows Off Hayden Panettiere's Return & Ghostface In NYC
By Jack Irvin and Jake Viswanath
Britney Spears Shares & Deletes Photos Of Justin Timberlake From 22 Years Ago
By Jake Viswanath
12 Years Ago, Austin Butler Manifested His Oscar Nom In This Disney Movie Scene
By Jake Viswanath
Sandra Bullock’s Razzies Speech Proves She’s The Ultimate Miss Congeniality
By Sam Ramsden
Get Even More From Bustle — Sign Up For The Newsletter
From hair trends to relationship advice, our daily newsletter has everything you need to sound like a person who’s on TikTok, even if you aren’t.