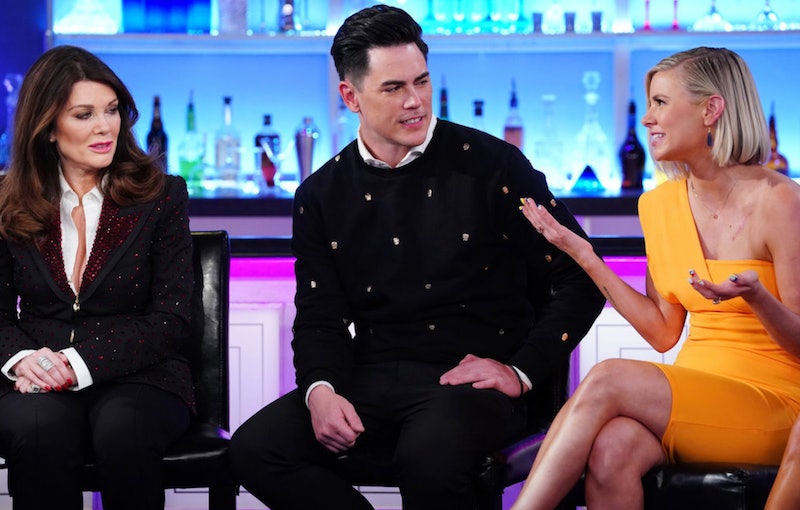 One of the Toms of Tom Tom turned 36 on Sunday, and the Vanderpump Rules cast celebrated accordingly. On Tuesday, July 9, the stars of the hit reality show posted photos and videos of Tom Sandoval’s birthday party all over Instagram. As Bravo's The Daily Dish pointed out, the theme appeared to be "Extra," and hey, I'm all for it. Any theme that calls for Sandoval to put on a top hat and climb into a pair of stilts is good in my book. The party also featured a bartender who could breathe fire, contortionists, and someone in a Britney Spears costume who nailed the choreography from the “I’m a Slave 4 U” music video. So again, I love this theme.

On first glance, the costumes that happened at this event do not make a ton of sense together: Scheana Marie dressed up like a dominatrix, Stassi Schroeder was in a dress that would fit right in at pre-French Revolution Versailles, there was a person wearing a giant Pink Panther head and platform boots, and so on. But the longer you stare at this IG posts, the more it all makes sense. Sandoval loves a costume party, and it really was only a matter of time before he threw a costume party where the theme was something along the lines of “Extra Costume Party Where You Get To Wear Whatever You Want Without Feeling Encumbered By A Hyper-specific Theme.” I look forward to hearing him explain the theme on Season 8 of Pump Rules.

Until then, here are some photos from Sandoval's extra-vaganza.

Here Is Stassi Schroeder Before The Party

As Stassi would say, those shoes are chic AF. Antoinette AF. Let them eat cake AF.

Here Is Katie Maloney Getting Ready

Here Is Ariana Madix On The Way To The Party

Glitter. Lace. A golden headpiece. What more could you want?

Here Is Scheana Marie On The Way To The Party

Scheana went to the party with her pal MTV reality TV personality Kailah Casillas. Wait, does this mean Kailah will finally appear on Pump Rules and give me one of the Pump Rules/MTV crossovers I've been waiting for? It's. All. Happening.

Here Is Raquel Leviss On The Way To The Party

Are those sleeves an homage to her reunion look? I sure hope so.

Here Are Some Of The Pumpers

I can't wait to find out what inspired each and every Pumper's costume. Season 8, you've already got me wrapped around your finger.

Just like her boyfriend does, Ariana always brings it when it's costume party time.

Here Is One Of Tom Sandoval's Costumes

Yes, one of his costumes. Brace yourself for a second Sandoval 'stume, Pump fans.

Here Is Sandoval's Other Costume

If you think this look could use a pair of stilts, do not worry. Sandoval is several giant steps ahead of you.

Here Is Sandoval On Stilts

Man. We really don't deserve Tom Sandoval, do we?

Here Is Sandoval With The Ghosts Of Sandoval Costume Past

Here Are The Contortionists

The screengrab does not do the performance justice. Not-Britney Spears killed it.

Here Is A Bartender Who Breathes Fire In Between Orders

Anyone need a light? Or a Flaming Fireball shot? Or a reason to check that your smoke detector is working?

And Finally, Here Is The Pink Panther

Excuse me. Here is a bedazzled Pink Panther.

Wow, what an extravaganza that was. And the Pumpers better rest up, because they may or may not have another major soirée to attend this week. Jax will ring in his 40th trip around the sun on Thursday, and if that does not call for a party, then I am Taco Bell truck in the courtyard of the Kentucky Castle.