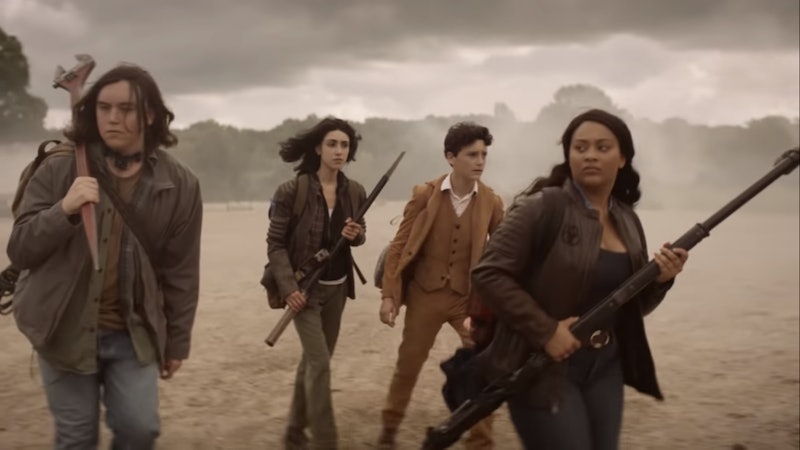 On Saturday, Oct. 5, AMC premiered a trailer for the untitled The Walking Dead spinoff set to debut this spring. The trailer premiere coincided with the show's panel at Comic-Con, where one of the show's stars, Alexa Mansour, compared the apocalyptic coming of age drama to Stand By Me, as reported by TVLine. The trailer backs up the comparison with shots of the show's teenage survivors venturing beyond the safety of their community on their own for the first time.

Per The Hollywood Reporter, the series stars Aliyah Royale as Iris, Annet Mahendru as Huck, Mansour as Hope, Nicolas Cantu as Elton, Hal Cumpston as Silas and Younger's Nico Tortorella as Felix. In a recent interview with The Chicago Tribune, Tortorella revealed that the spinoff is set 10 years after the apocalypse, and their character acts as "protector of a younger generation" as they head out on a quest beyond their community's borders.

Tonally, the untitled TWD spinoff is completely different from both the original series and the more family-focused Fear the Walking Dead. The show is set to focus on a group of teens who have largely been sheltered from the harsh realities of their world. In the trailer, it's revealed that the kids attend school where they learn about protecting themselves from the undead, but lead lives that are otherwise normal compared to the reality that young characters like Carl from TWD have faced.

THR reported that series co-creator Scott M. Gimple offered new details about what TWD fans can expect from the young adult entry into the franchise during Saturday's Comic-Con panel. "They've grown up in the apocalypse," said Gimple. "They're aware of walkers. They haven't interacted with them. They've been [living] beyond walls. That makes any journey they need to make incredibly dangerous. They are affected in different ways by what happened."

Gimple further explained that the spinoff has a "quest aspect." The trailer suggests that the father of two characters is missing, and his daughters are hoping to bring him back to the safety of their compound. In that way, the show is immediately setting itself apart from both of its predecessors. Previously, survival has been the focus of nearly every character in the franchise. This story is one of adventure and self-discovery, but that doesn't necessarily mean it will be lighter in tone — even though the trailer does end on a comedic moment.

THR also revealed that the cast and Gimple confirmed that the 10-years post-apocalypse setting means the show is operating within the same timeline as TWD. There are a few key differences though: the story begins in the Midwest, zombies are called "empties" instead of "walkers," and due to the more civilized nature of the characters' community, their weapons will be slightly more advanced.

Despite all of the things that set the spinoff apart from the original series and its followup, per THR, Gimple stressed it's key that all of these shows exist in the same universe. If a crossover is in the works, the co-creator isn't sharing that news just yet, but there's always a possibility. "This is a whole new mythology in the world of The Walking Dead but this mythology has touched both shows," he said. That shared mythology means the teen-led spinoff is expanding the world of TWD in a way that viewers will get to see for themselves this spring.

More like this
'The Undeclared War' Spotlights The Real-Life Threat Of Cyber Attacks
By Maxine Harrison
What’s New On Netflix: Lana Condor’s Ghostly Comedy & A Sexy Reality Series
By Arya Roshanian
Hannah Khalique-Brown Has Her Sights Set On 'Strictly'
By Frances Stewart
What’s New On Netflix: 'Stranger Things' & 'Mean Girls'
By Arya Roshanian
Get Even More From Bustle — Sign Up For The Newsletter