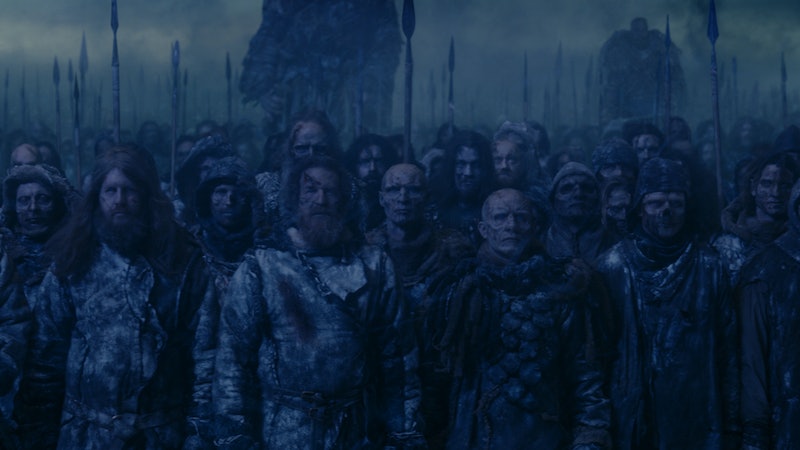 Listen up, nerds, because it's time to settle something once and for all: the White Walkers are not zombies. The White Walkers can create zombies by resurrecting the dead bodies of humans. And also the dead bodies of horses, bears, mammoths, direwolves, and perhaps even dragons. With me so far? Good, because I'm about to take you on a beautiful tour of all the undead things that unlive in Westeros. Here's how the zombies — and other resurrected beings — work in the A Song of Ice and Fire series.

To be clear, this zombie tour is going to primarily focus on how zombies work in the Song of Ice and Fire books. The HBO adaptation of George R.R. Martin's dragons-vs-zombies epic is mostly the same in how they deal with the undead. But the Game of Thrones TV show makes a few significant changes to the lore, like giving the White Walkers a clear leader, showing us their backstory, and including that whole zombie-catching road trip in season seven.

So for now, let's stick to how Martin himself deals with the walking (and sometimes talking) dead. Because, for all the death and devastation in the Game of Thrones books, there's a whole lot of undeath, too. There are ice zombies, fire zombies, and even something dangerously close to a medieval take on a Frankenstein's Monster.

We'll start with the basics.

The Others, or the White Walkers, Cold Gods, or White Shadows are, again, not zombies. George R.R. Martin has gone on record saying that they are not dead at all. Rather, they are strange, otherworldly creatures who seem to be made of ice. They speak in a language that sounds like ice cracking, and they avoid the sun or the heat. Their eyes are bright blue. White mist rises when they arrive. It seems that they can only be killed by obsidian, called "dragonglass," or maybe by Valyrian steel. The magic of the Wall prevents them from going any further south, and the red priests of R'hllor believe that they are children of the evil Great Other, out to kill life itself.

In the show, the Others were created by the Children of the Forest (those little hobbit-y guys) to fight off the threat of invading men, but in the books, we're not quite sure where they came from or what they want. They do seem interested in fighting the Night's Watch, though, and most wildlings are trying to move down beyond the Wall to get the hell away from the Others and their creepy ice magic.

The one notable exception is the wildling Craster, who lives with a whole bunch of his miserable daughter-wives and sacrifices his infant sons to the Others. His wives believe that the Others change these boys into Others themselves, warning that Craster's Sons are coming for Gilly and her baby.

So the Others might be able to change lil' baby humans into lil' baby Others. There are also legends of the Night's King, a Lord Commander of the Night's Watch who married an Other lady so... maybe the Others can also kick it with humans if they want to?

At the moment, though, it seems like their main goal is to kill people and then bring them back as wights.

Wights are the most zombie-like of the Westeros zombies. They're dead people or animals, resurrected through magic by the Others. Their eyes always turn that bright shade of blue. It's unclear whether the Others are controlling them like puppets, or whether they just go on their merry zombie business once they're up and at 'em, but they generally want to kill people once they come back to unlife.

Corpses that are brought through the Wall are still in danger of popping up as wights, and wights seem to have some amount of memory of their former selves. The wight of Othor goes to Lord Mormont's room to try and kill him in A Game of Thrones, so it clearly had an objective of some kind. And it could remember where the Lord Commander slept. But other than that, wights can't talk or reason or do anything other than kill.

Fire will kill wights, but we don't know if dragonglass will — Sam tries to stab a wight with dragonglass and the dagger breaks on its chainmail. If you just cut off a part of a wight, though, it'll still be animated: Othor's still moving hand is brought down from the Wall to King's Landing to try and convince the Iron Throne that there is a major zombie problem up north. But by the time Tyrion Lannister looks at the hand himself, it's decomposed and no longer moving and he doesn't believe in zombies, anyway.

Except forget all of that, because there's also Coldhands. He rolls up Beyond the Wall, riding a giant elk, and saves Sam, Gilly, and baby Gilly from the wights. Later, he also pops us and helps Bran and the Reed kids, and leads them to the Three-Eyed Crow. He's clearly undead. Dude doesn't breathe, and his hands are black with congealed blood. But he isn't a wight, either: he can talk and think perfectly, and his eyes are black, not blue.

In the show, Coldhands is immediately revealed to be the missing Stark uncle, Benjen, who was saved from wight-hood by the Children of the Forest. In the books, though, we have no idea who he is. He's dressed like a brother of the Night's Watch, and he covers his face. But the Children of the Forest say that he was killed "long ago," which wouldn't be the case for Benjen.

He is unable to pass through the Wall or to enter the cave of the Three-Eyed Crow, due to Magic Reasons. It seems like he's working against the Others and the wights, but he's also not invited to the psychic tree party in the Three-Eyed Crow's cave.

It's unclear who brought Coldhands back to life, but it seems clear that he's not a wight, and more of a chilly, ice-magic equivalent to the people resurrected by fire...

Oh yeah, there are also fire zombies. Or, at least, fire magic equivalents to Coldhands. Beric Dondarrion is resurrected a whole bunch of times by the red priest Thoros, using the fire-based magic of the god R'hllor. Every time he's brought back to life, though, he's a little bit worse for the wear. His memory is starting to go, and he doesn't seem to eat or sleep. He looks like a scary murder scarecrow, but he's still much more human and with it than the wights.

In the TV show, Jon Snow is also resurrected using this magic by the priestess Melisandre, after she realizes that she made a huge mistake in following Killjoy Stannis around for so long.

In the book, Jon has only just been murdered, but Beric does decide to die for the final time in order to pass on his flame of unlife to Catelyn Stark. Unfortunately for everybody, though, Catelyn was dead and marinating in the river for a long time, and she comes back as the vengeful and cruel Lady Stoneheart. Her wounds won't heal and she can barely speak with her slashed throat. She has just enough of her former self to seek revenge for her murdered family, no matter how many innocents stand in her way.

So, if Beric and Stoneheart are any indication... I'm a little worried that if book Jon comes back to life, he's not going to be the fun, moody teen he once was. Fire magic will bring you back, it seems, but you'll never be quite the same again.

And, last but not least, there's also a freaking Frankenstein/necromancer/mad scientist dude living it up at the Red Keep. Qyburn got thrown out of med school for being a huge body-snatching creep, but he cozies up to the Lannisters and becomes part of the court at King's Landing anyway.

Cersei starts giving him people she wants to get rid of, for his "experiments." None of these people ever come back. Qyburn is also put in charge of treating Ser Gregor Clegane, also called the Mountain, who is slowly dying from Oberyn's poisoned Dornish spear. Qyburn claims the the Mountain has died, and sends a skull to Dorne to prove it.

But then this huge, Mountain-sized knight called Ser Robert Strong shows up. Qyburn says that he's "brought" him as a champion for Cersei's trial, and that Robert has taken a vow of silence. Robert Strong also refuses to remove his helm, eat, sleep, or use the bathroom. Basically everyone in King's Landing knows that Robert Strong is a Frankensteined Gregor Clegane, who may or may not even have a head.

We have no idea what Robert Strong's weaknesses are, or whether he has any memories of his former life, but Qyburn has promised to make Cersei a champion that could not be defeated.

So... will Qyburn make an army of his own Frankensteined knights to go up against all those wights? Will Jon come back to life through fire or ice? Will Coldhands ever get a thank you for being the one cool zombie north of the Wall? Only time will tell. But for now, that all we know about the various zombie folks wandering around in A Song of Ice and Fire.