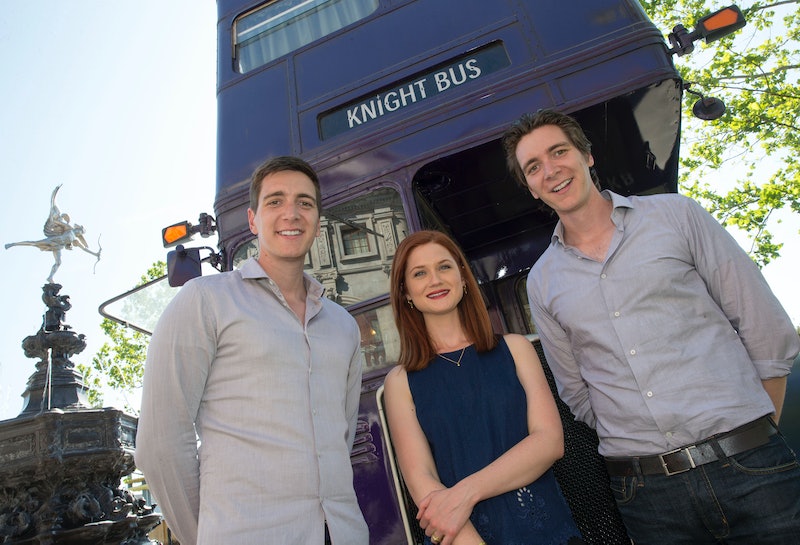 Once a Weasley, always a Weasley — just ask the actors who brought the magical family to life on the big screen. On the Thursday, May 7 episode of James and Oliver Phelps' podcast, Double Trouble, the Weasley twins had a mini Harry Potter reunion with their onscreen sister, Bonnie Wright. During their lengthy conversation, the Phelps twins and Wright talked about their enduring bond, nearly 20 years after they first met on the set of Harry Potter and the Sorcerer's Stone.

"January 2001, King's Cross Station, that's where they met for the first time," James recalled of his first introduction to Wright, later recounting his first meeting with his onscreen sister. "I remember it was so cold. On the set, it was Oliver, Rupert [Grint] and myself and I hadn't met you yet or Julie [Walters, who played Mrs. Weasley] until then," he explained. "You and Julie came in, and I remember Julie shouting, 'Where are my boys? I need to meet my boys!' And you were with her."

It turns out that Wright stuck close to Walters while filming, because it was the very first time the nine-year-old had ever been on set. "I remember her being very much like, 'Here, I've got you,'' Wright recalled. "And I remember feeling so much safer knowing that I had her showing me the way — not knowing at that age what an amazing actress and career she had."

The fact that Wright immediately felt such a strong bond with her onscreen mother is even more remarkable because, as Oliver revealed, the actors who played the Weasleys met for the first time as a unit right before shooting that scene. "It's crazy as well, if you think that as a film family, the first time we met was half an hour or so — if that — before cameras were rolling on that platform," he recounted.

Despite that brief introduction, the Phelps twins, Grint, and Wright managed to form a bond that has lasted over two decades, likely because of the unusual circumstances that were being in eight Harry Potter films. "We shot them for ten years, and then it'll be ten years since we finished them, which to me is really weird," Wright explained. "It will suddenly become as long ago as how long the experience lasted [as a whole]."

She continued, "Because when I finished the films, I had spent more of my life [starring] in the films than not. I was 19 and I started filming when I was 9. Sometimes it feels like yesterday, but another time it feels like another person. Another life."

Still, all three reflected the lasting legacy of the Harry Potter series, revealing that they often get strong reactions from fans when they are recognized out and about. "It is pretty funny," Wright said. "[When] they see you, more close and they're like, 'Wait what? No, that can't be real. I must be out of my head, and I'm just assuming they're those people.'" As for Oliver, it turns out that fans are still upset that he's no longer a ginger. But red hair or no, this episode of Double Trouble proves that the Weasleys will always be a family, onscreen and off.

More like this
Rupert Grint Just Shared A *Major* Update About Ron Weasley’s Future
By El Hunt
'Friends' Star Maggie Wheeler Offers Support To Matthew Perry After Reading His Memoir
By Alyssa Lapid
Anne Hathaway Shared A "Thrilling" 'Princess Diaries 3' Update
By Darshita Goyal
The 'Scream 6' Trailer Shows Off Hayden Panettiere's Return & Ghostface In NYC
By Jack Irvin and Jake Viswanath
Get Even More From Bustle — Sign Up For The Newsletter
From hair trends to relationship advice, our daily newsletter has everything you need to sound like a person who’s on TikTok, even if you aren’t.