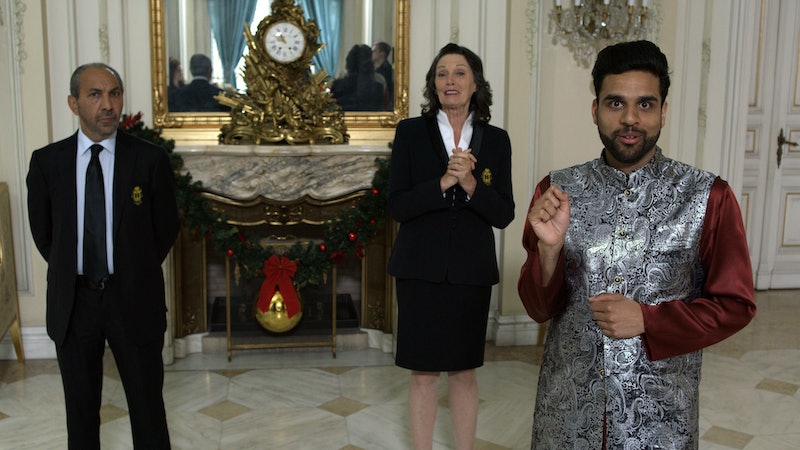 In the winter of 2017, A Christmas Prince debuted on Netflix. One of the streaming giant's first original Christmas movies, it quickly became a viral sensation. Obviously, people couldn't get enough of the love story about a journalist named Amber who falls in love with Prince Richard of Aldovia, just in time for Christmas. The sequel to A Christmas Prince, subtitled The Royal Wedding, dropped last week, and as much fun as the second movie is overall, there's one particular character that seems dated. The wedding designer in A Christmas Prince 2 falls into a tired stereotype of dramatic and pushy gay male stylists.

Spoilers ahead. The wedding stylist and planner, Sahil (Raj Bajaj) has one of the most comedic roles in the movie — at least if you still think that men having strong opinions about women's fashion is funny on its own. But many of the intended laughs are tied to mannerisms that are stereotypically assigned to gay male characters.

In that way, Sahil brings to mind another memorable wedding planner from a comedy of the past: Franck Eggelhoffer, played by Martin Short, in Father of the Bride. Now, Short told the man himself that he based his performance as Franck on real-life Beverly Hills wedding planner Kevin Lee, per The Daily Dish. And Lee, who's appeared on The Real Housewives of Beverly Hills and Vanderpump Rules, does seem to have some characteristics and favorite phrases in common with the planner who plans events for the Banks family in the movies. Keep in mind, though, that Father of the Bride came out in 1991, and its sequel, which also featured Franck, came out in 1995.

Sahil, like Franck, often functions more as a caricature than as a real person. From the moment that we meet the new character, Sahil is so over the top that he doesn't seem believable, even compared to other characters in the not particularly realistic film. First of all, he speaks in third person. "Sahil designs," he says. "Sahil is honored to create for you."

The wedding designer explains in the same scene that he previously worked with the Baroness of Frankfurt. "Sahil designed all six of her weddings," the character says. "Sahil was a child prodigy." Then, he tells Amber's dad, "You may know of Sahil, but I assure you, you do not know Sahil." This all takes place within the first 13 minutes of the movie, marking the second time that Sahil adopts a "bitchy" attitude, the first being at the airport in the opening of the movie when he takes the cab that Amber's dad had hailed.

Now, the "sassy" gay stylist is a trope that's been used beyond these two movies. This year's Crazy Rich Asians, which was (rightly) celebrated for its breakthroughs in Asian representation, included the character of Oliver T’Sien (Nico Santos) — the all-knowing side character who can make anyone red carpet-ready in an instant. But though Oliver isn't the most original, well-rounded gay male character of time, he has a much deeper back story than Sahil receives in A Christmas Prince 2. But the two 2018 releases — a family-friendly Netflix sequel and a groundbreaking big-budget studio film — show how persistent this trope really is.

Of course, some stylists are gay men — but they certainly don't all have the same exact personality. If you watch Netflix's Queer Eye, you know how differently each of the five male stylists/lifestyle experts express themselves. When you have characters like Sahil recycling lines that Paolo Puttanesca (Larry Miller) says almost verbatim in 2001's The Princess Diaries, then you have a problem with the depth these characters are afforded. "You will be beautiful," Paolo tells Princess Mia, which sounds a lot like Sahil's promise to Amber: "You are my canvas and Sahil the artist."

When looking at representations of characters who are of marginalized identities, it's important to make sure that they don't just follow patterns established in the past. If Sahil had had more of a personal backstory or original voice in A Christmas Prince, he wouldn't seem like a prop used to get cheap laughs and create a conflict for Amber, who seems so reasonable and controlled next to him. The only glimpse audiences get of his personal life is at the end of the movie, when he shares a flirty glance with another man.

Simply showing a gay man looking at another man in a romantic way doesn't count as the positive, fully-realized representation that contemporary movies should be expected to provide. As silly as a movie as The Christmas Prince 2 is, viewers can still feel disappointed that Sahil serves as comic relief for all the wrong reasons.