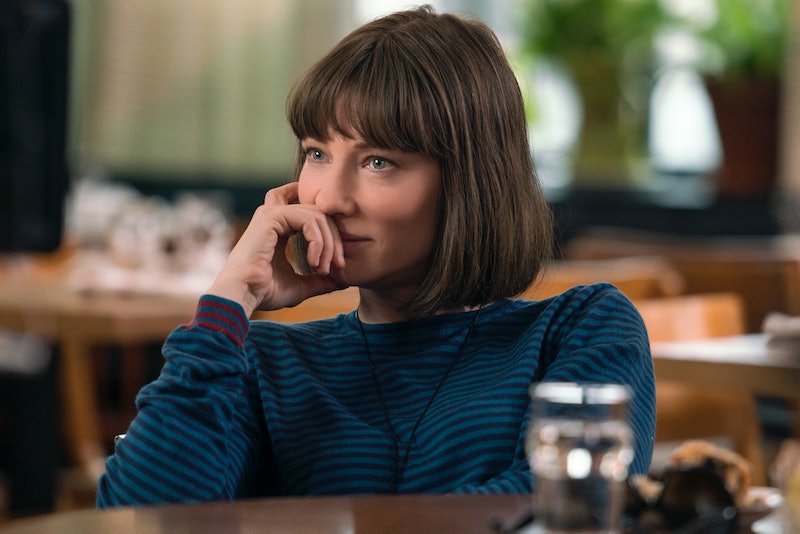 The film adaptation of Maria Semple's 2012 bestseller, Where'd You Go, Bernadette, comes to theaters on August 16, and readers everywhere want to know how well the Richard Linklater film, which stars Cate Blanchett in the title role, will hold up to Semple's comedic material. I've got a look at the one major way the Where'd You Go, Bernadette book differs from the movie below, so you can be prepared for changes when you see the novel brought to life on the big screen. Spoilers for the book and movie are ahead.

Set in Washington, Where'd You Go, Bernadette centers on Bee, a precocious 14 year old, who must flex her detective skills when her mother, the agoraphobic Bernadette, mysteriously disappears in the days leading up to a family trip to Antarctica. Bee discovers a rift between her parents, leading back to a string of disagreements between Bernadette and their neighbor, Audrey, may be connected to the missing-persons case.

As it turns out, Audrey's friend, Soo-Lin, works with Elgin — Bee's father and Bernadette's husband — and has convinced him that his wife needs to be involuntarily committed, due to allegations of her violent behavior toward Audrey, as well as her agoraphobia. The two begin an affair, and Elgin purchases a new house for himself and Soo-Lin when she becomes pregnant with his child.

As Elgin prepares to have his wife put away, he stages an intervention for his wife. Bernadette excuses herself to go to the restroom and never comes back, as if she vanished into thin air. Bee's investigation reveals that, not only is Bernadette alive and well in Antarctica, but she was aided in her escape to Antarctica by Audrey, who never wanted her accusations to lead to a psychiatric hold.

In terms of the narrative's events, Richard Linklater's film adaptation of Maria Semple's novel sticks pretty close to its source material. The movie deviates from the book in a major way, however, shifting its focus from novel heroine Bee (Emma Nelson) to her mother, the titular Bernadette (Blanchett). Linklater tells Vulture that, for him, "[Bernadette's] journey is really what it’s all about," saying that, "We can’t have our protagonist be gone from the movie for 35, 40 minutes — she’s the story."

Linklater's decision to shift focus from Bee to her mother leads to some of the biggest changes in the page-to-screen adaptation. Readers who relished the mystery of where Bernadette went may be disappointed when they see the film, which reveals her location in its opening sequence. Linklater defends his position to Vulture, saying, "Bee doesn’t know where Bernadette is. Elgie doesn’t know. So it’s still the story; you’re just given more privilege."

The film version of Bernadette eliminates a major subplot from the novel, as Elgin (Billy Crudup) does not have an affair with Soo-Lin (Zoë Chao), and therefore does not get her pregnant. That may leave Elgin's character a bit more redeemable in the hearts and minds of Bernadette fans, as his adultery has been a major point of contention among Semple's readers since 2012.

Another prominent change in the film's treatment of its source material comes during the intervention. In the book, Audrey (Kristen Wiig) mounts a dramatic rescue of Bernadette during the latter's bathroom trip. Linklater's film has Bernadette seek Audrey out instead, a move that arguably skews the dynamic between the two women.

Where'd You Go, Bernadette is out in theaters. The book is available now from your favorite retailer.