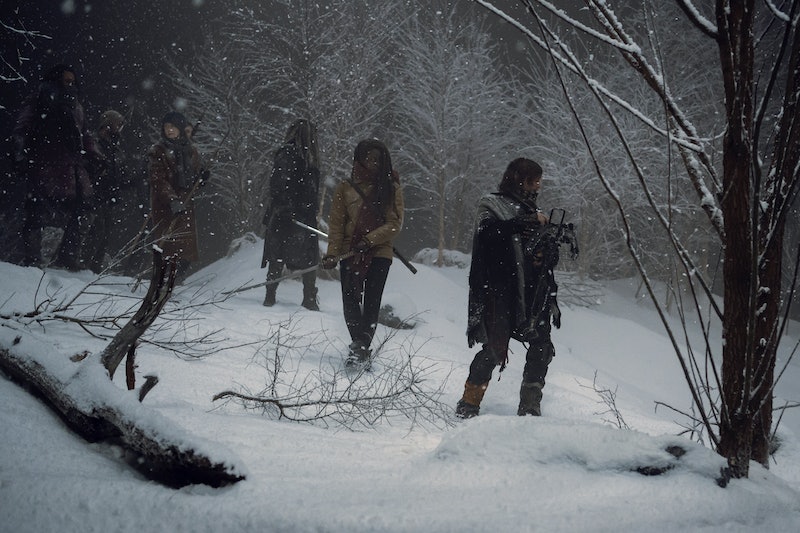 Season 9 of The Walking Dead is finally coming to an end and it’s been one of the biggest transitional seasons so far with Rick’s exit, Maggie’s MIA status, the introduction of Magna’s crew, Alpha, and the deaths of prominent characters like Jesus, Tara, Enid, and Henry. The season finale will give fans their first taste of actual winter with a snowy episode showing the aftermath of the pike murders and a surefire cliffhanger to keep fans talking for weeks to come. Of course, everyone will have one big question in mind – when will Season 10 of The Walking Dead premiere? Based on the past seasons, fans can expect their favorite zombie series to come back for more action this fall.

The Walking Dead’s official Twitter account confirmed the Season 10 renewal in a very creep way with a short clip of Alpha and two Whisperers looking menacingly into the camera. The end of the announcement video featured a simple message – S10 October – so it’s going to be around 7 months before Michonne, Daryl, Carol, and the gang return. An October season premiere is nothing new considering all of the previous seasons have kicked off during the same month.

It remains to be seen if the show will come back in early October or if it will kick things off a little closer to Halloween. Season 9 started earlier than previous seasons, so it’s likely that the Season 10 premiere will also happen early in the month. Either way, viewers will get answers to their questions and continue this long running story.

Fans also know that the Rick Grimes movie trilogy is on the way to further expand the Walking Dead universe. There’s no word on when the first movie will drop, but it’s possible that the show will pull a surprise announcement shortly after the Season 9 finale. Perhaps the first Rick movie will drop sometime this summer to keep fans locked into the apocalypse drama during the TV show’s hiatus. This would make sense, especially if a Rick Grimes fan theory about him contacting the survivors in the season finale comes true.

It’s not clear if Season 10 will pick up right after the finale or if the show will do another time jump. Many fans are hoping they will make it the first winter season to reveal more about how the survivors have made it through the winter. And, Season 9 jumped approximately 7.5 years into the future so it doesn’t make sense to do a major time leap again.

The upcoming season has to focus on ending the Whisperers conflict and setting up Michonne's exit from the series. And, Comicbook.com reports that Lauren Cohan is not officially done with The Walking Dead, so there’s a chance Maggie will return in Season 10 to lead the Hilltop again since, well, all of their leaders have died now.

So, hang in there Walking Dead fanatics because the next chapter in this enduring saga is just around the corner.

More like this
'Elite' Season 6 Is Arriving Sooner Than You Think
By Gretchen Smail and Grace Wehniainen
'The White Lotus' Season 2 Finally Has A Release Date
By Bustle Editors
'Abbott Elementary' Returns For Season 2 Just Days After The Emmys
By Alyssa Lapid and Grace Wehniainen
The ‘Emily In Paris’ Season 3 Release Date Is Here, Plus The First Footage
By Bustle Staff
Get Even More From Bustle — Sign Up For The Newsletter