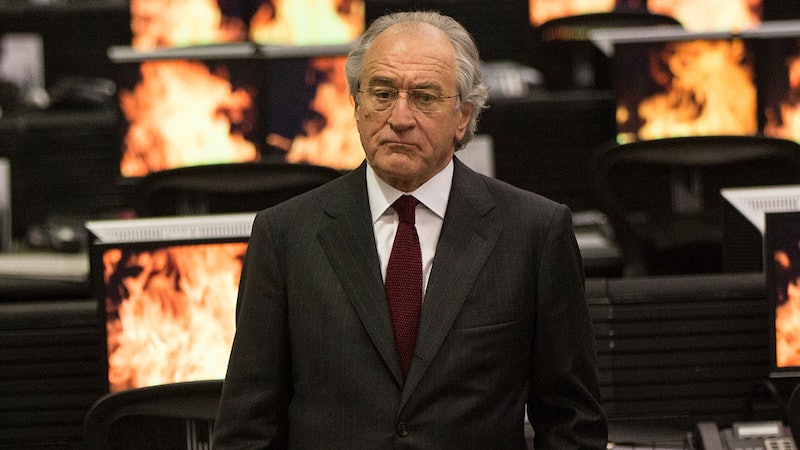 The biggest financial scam in history was the Ponzi scheme pulled off by Bernie Madoff, in which he was convicted of bilking his customers out of an astonishing $50 billion. Madoff is currently serving a 150-year prison sentence that he began in 2009, but his actions are still fresh in the public memory, and the new HBO film The Wizard of Lies looks to shed even more light on the scandal. The movie features some big stars, and the photos of the Wizard of Lies cast vs the real Madoff family show some pretty clever casting.

Robert De Niro as Bernie in particular is a stroke of genius. The two are both old school native New Yorkers, and De Niro at 73 is just a few years older than Bernie was at the time of his conviction. Michelle Pfeiffer stars as Bernie's wife, Ruth, and while the actor is quite a bit younger than the woman she's portraying, she still manages to nail the grace and glamour of the former director of Bernard L. Madoff Investment Securities. Rounding out the cast are Nathan Darrow as Bernie and Ruth's son, Andrew Madoff; Alessandro Nivola as their other son, Mark Madoff; Kristen Connolly as Mark's wife, Stephanie Madoff; and Michael Kostroff as Bernie's brother, Peter Madoff. So take a look at the photos below to see how all the actors compare to the real deal.

It's the hair that really sells it.

Pfeiffer is noticeably younger, but I think she still pulls it off.

I've got to admit, Darrow is almost a dead ringer for Madoff, who sadly passed away from Lymphoma in 2014.

An even more eerie casting for the elder Madoff son, who committed suicide in 2010.

In case you couldn't tell by now, physical resemblance seemed to be high on the casting director's list of priorities...

The Madoff family as depicted in The Wizard of Lies bear a pretty close resemblance to their real life counterparts, for the most part, which just goes to show you how much care HBO took in making their new film as accurate as possible.