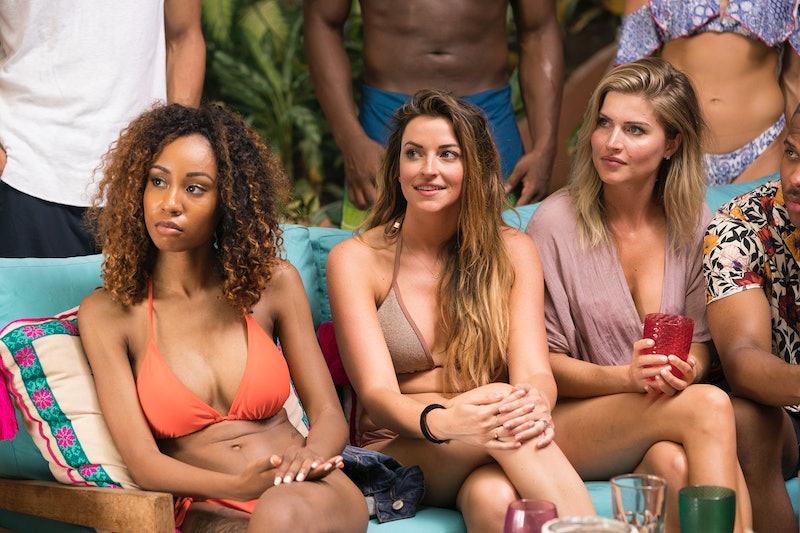 This season, Bachelor in Paradise has already brought a lot of drama, and we're only four episodes in. But one thing is very different this year than it has been in summers past, and that's the fact that the women are changing the game on Bachelor in Paradise. Even though everyone wants to score those roses so they can stay on the show week after week, it seems like the ladies who were cast on this season are way less likely to compromise for relationships or dating situations that are less than they deserve to get there — and at the same time, they're being kind to each other. Honestly, this could have a major impact on the show going forward.

There's definitely a general attitude of "over it" among the women on paradise right now, especially when it comes to Tuesday night's episode, but even more so when it comes to potential love triangles. Case in point: the Colton and Tia debacle, which has somehow been at the center of the show every single episode so far. When Jacqueline arrived at the beach, Jenna immediately directed her to Colton, who was single and (supposedly) ready to mingle at the time, but as soon as she found out that there was even a hint of something going on between him and Tia, she was out.

And while it seemed like Jacqueline was actually really turned off by the "love triangle" that could be created by getting involved with Colton, it also seemed like she didn't want to make things any harder for Tia than it needed to be.

Even where Jacqueline wasn't involved, these ladies just aren't into love triangles or being played by the men this summer. When Chris made out with Krystal at the same time he was telling Tia that he was the man she deserved, not Colton, the women joined forces to call him out on it. And although Krystal did end up deciding that she wanted to keep dating Chris, at first, it did seem like the situation was a turn off for her.

Speaking of Tia, she was lucky enough that the other women had her back on the Colton situation, which was actually really sweet to witness, considering how emotional it obviously was for her. Bibiana actually went to go talk to Colton to tell him how lucky he was that someone cared for him that much, which led him to eventually, finally commit to Tia. She didn't have to do that, but she did — and it's awesome that, even while these women are obviously worried about their own romantic futures and their fates on the show, they're still looking out for each other.

Throughout this episode, the women had each others' backs. Caroline told Kenny that she wasn't "into campaigning for roses," and although she did get sent home at the end of the night, at least she was honest about how much she was willing to put into chasing someone. Later, when Jordan had an outburst before the rose ceremony and told Chelsea and Jubliee to "shut the f*ck up," the women (and Eric) called him on it until he apologized. People just aren't here to fight or cause unnecessary hurt in the name of putting on a good show,

If anything this season, the ladies seem to be far more about forging their bonds with each other than with the men, and it's easy to understand why. As Caroline said, the idea of "campaigning for roses" isn't all that attractive, and as we know from seasons past, the real lasting relationships from the Bachelor franchise have always been the friendships. This kind of bonding may not last, but seeing the connections these women are making is worth it for now. Maybe this will cause a shift in the way relationships play out this season? Let's hope so.

More like this
'FBoy Island's Louise Shocked Everyone By Picking Mercedes In The Season 2 Finale
By Kadin Burnett
It’s Official: 'The Bachelorette' Is No Longer A Fairy Tale
By Samantha Allen
Kathy Hilton Awkwardly Misidentified Lizzo As Precious On Live TV
By Jake Viswanath
'Indian Matchmaking’s Vinesh Is Still Single After Season 2
By Kadin Burnett
Get Even More From Bustle — Sign Up For The Newsletter