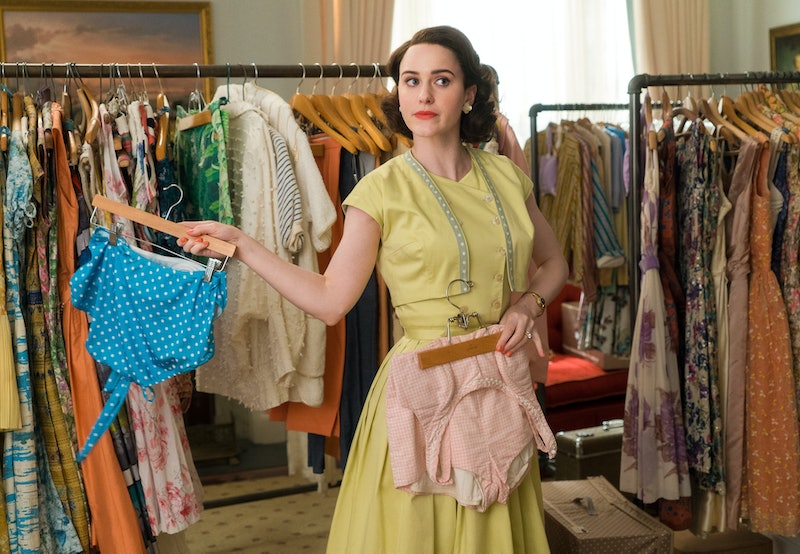 “Do you really think you can go back to making Jell-O molds again?” Lenny Bruce (Luke Kirby) asks Midge (Rachel Brosnahan) halfway through Season 2 of The Marvelous Mrs. Maisel. Seeing her out on a date with a man who isn’t Mr. Maisel, he questions whether after building a secret comedy career out of the broken pieces of her marriage, she would go right back to being a housewife if a relationship beckoned. Read between the lines, though, and it's clear what he’s really asking is whether Midge is actually willing to give up her cushy life as an uptown Manhattan housewife for a new and and far less glamorous one as a stand-up comedian who works blue while wearing lots of pink.

The question of Midge’s commitment to stand-up hangs over the first part of the second season. (Amazon released the first five episodes to critics for review.) Midge’s bawdy act is now the talk of the town, despite her still choosing to keep her nighttime antics secret from her friends and family. This might become more difficult now that she’s ditched her rather un-marvelous nom de comedy Amanda Gleason and is looking to expand her act beyond the Gaslight with the help of her manager Susie (Alex Borstein).

But it would be hard to blame Midge if she ultimately gave up comedy and slid back into life as a housewife. As empowering as it can seem to the 2018 viewer to watch Midge take down inconsiderate, sexist men on stage, making it as a comic is hard, and making it as a single woman in the comedy world of the 1950s is even harder. Midge is still remarkably constrained by her era, which is to say that it's going to be a struggle for her to have her Jell-O mold and eat it, too.

The same holds true for most of the other women on The Marvelous Mrs. Maisel. In fact, the internalized sexism is so strong that when Midge’s mom Rose (Marin Hinkle) escapes to Paris looking to revitalize her life, it’s her own daughter who tells her she needs to go home and be a wife again. The gender roles of the ’50s were so defined that even Midge has trouble seeing her mom as anything other than a mom.

Still, the marvelous Mrs. Weissman ends up going back to New York with Abe (Tony Shalhoub), who signs them up for a dance class and helps her audit an art class at Columbia University. This compromise is seen as a win for Rose, who now gets to fulfill some of her wishes. But, she still needs a man’s permission to do so. In this case, two men's permission: her husband and the dean of Columbia, who signs off on her taking a class.

Midge also has to go through male bookers and fellow male comedians to perform anywhere in the city. Not to mention that it’s Lenny Bruce’s co-sign that helps add serious clout to Midge’s act. Men are the gatekeepers to a woman’s autonomy, which is why the little power women have in The Marvelous Mrs. Maisel is a sort of a charade. Women can succeed, but often not without a man’s help, whether they’re an ally or an adversary.

That’s not to say it isn’t fun watching Midge and Rose start to come into their own this season, often by antagonizing men. They challenge them and show them what it's like to be subservient — the butt of the joke, the follower instead of the leader. Through her act, Midge becomes more comfortable asserting herself in these male-dominated clubs where men get the good slots, and she even decides to heckle the male comedians who bumped her, getting laughs at their expense. But it's important not to lose sight of the fact that this step toward autonomy also comes at Midge's own expense, as her antics don’t go over well with the man who runs the club and most certainly won't be inviting her to perform there again. There's a loneliness in her trying to up-end her life, which Season 2 gets at even more.

So yes, there is something powerful about these women taking on the patriarchy, but they’re by no means toppling it. Rose points out to the female art students at Columbia who have hopes of being teachers at the university that there are no women teaching in the department. It’s something these young women haven’t taken notice of, too focused on their dreams to consider reality.

But when Rose is told by the dean that these women are only there to help fund the college so men can succeed, she doesn’t stand up and fight for them. Instead, practicality kicks in: She encourages the dean to let the women switch to the business school where they’ll have an easier time finding a husband. After all, what else would these women do? Become artists? All the ones she knows are miserable or dead — no, they’re better off getting married. It means giving up some agency, sure, but in favor of security.

It's a choice that underscores Midge's predicament on The Marvelous Mrs. Maisel. For as brassy and headstrong Midge is, the show rightfully points out that it's nearly impossible to be fully autonomous as a woman in the 1950s without taking some daring risks. Midge and Rose are defiant in fits and starts, but they aren’t yet ready to be fully independent, and neither is the society they live in. To be an independent woman in the 1950s is an all or nothing game that you can't blame them for not wanting to play.

It’s part of why Midge still treats comedy like a hobby instead of a job, like her gig at B. Altman. She takes that position seriously, worrying about how she’ll work her way back to the makeup counter. But standup is an unsavory profession for women, which is why Midge would rather let her parents think she goes out every night of the week looking for a man instead of spending night after night in dingy clubs honing an act that would certainly make them — and likely many potential suitors — blush.

The problem is, Susie, an actual independent woman, has staked her claim on Midge. She’s got nothing left to lose and everything to gain, which is why she’s willing to follow Midge on vacation in the Catskills with a plunger in hand to make sure she doesn’t miss her chance to be something big.

Midge, on the other hand, knows an actual career in comedy could mean losing everything that she's come to take comfort in. She isn’t wrong to think that since there’s absolutely no way she’s getting the rabbi again if he knows the things she’s said about Jewish women in the bedroom.

But Midge can’t keep having it both ways. There's only so long she can balance the expectations of being both a comedian and a housewife – and the same goes for The Marvelous Mrs. Maisel, which will return for a third season. The stakes for Midge have to be upped and the show seems to understand that. At some point, Midge will have to make a choice knowing that Lenny's right, it's going to be hard to go back to Jell-O molds after all this.