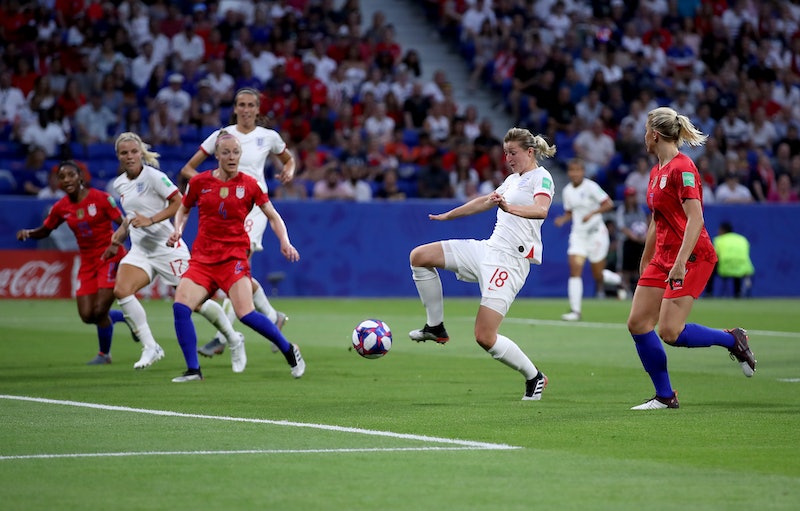 The world watched with bated breath as two top-rated women's teams went head-to-head in the first semifinal of the 2019 Women's World Cup. With five previous wins on each side since the tournament began, the No.1 ranked U.S. and No. 3 England women's soccer teams were worthy opponents. But in the end, the U.S. came out on top with a women's World Cup semifinal score that has everyone pumped for the finals.

Before this semifinal match, which ended in a close 2-1 score, both the U.S. and England duked it out in difficult quarterfinals matches. The U.S. women's team, which has won three World Cup titles in the past (including the first World Cup in 1991), played a nerve-wracking match against host-team France, but came out on top despite a last-minute goal on the opponent's side. England came out just as strong after eliminating Norway, 3-0.

And based on viewership numbers, the world has been watching the teams intently the entire time. The U.S. women's game against France became the world's most watched soccer match on English-language U.S. TV since the men's World Cup final last year, and FIFA is reporting a predicted 1 billion viewers on all platforms by Sunday. This, on its own, is a huge win for the U.S. women's soccer team especially, considering its recent battle with the U.S. Soccer Federation over a gender pay gap between the women's and men's teams.

The U.S. women's team filed a lawsuit against U.S. Soccer back in March over alleged gender discrimination. The U.S. Soccer Federation argued that the differences in pay between the women's and men's team was not because of gender discrimination, but due to how differently each team functions. It also argued it was "based on differences in the aggregate revenue generated by the different teams and/or any other factor other than sex," according to The Wall Street Journal. However, another report from the Journal showed that, when it comes to revenue, the women's team has actually out-earned the men's team since 2015. But while the lawsuit continues off the field, the U.S. team's wins continue on the field.

The number of views isn't the only record-breaking feat the U.S. team accomplished during its world cup journey. The women athletes also broke the World Cup record for win by a biggest margin after beating Taiwan, 13-0.

But the anticipation surrounding Tuesday's match wasn't just felt by the audience and athletes — coaches felt it too. Before the game began, England head coach Phil Neville told BBC, "My players now want to win. If we don't get the right result, we'll feel the disappointment and we'll see that as a failure." Meanwhile, U.S. head coach Jill Ellis has been defending her own team. "I don’t think in any way that this is an arrogant team. This team knows they have to earn everything," Ellis said to The Independent following accusations of her team being arrogant for previewing England's World Cup private hotels early. "We have tough opponents still ahead of us and we have to earn every right to advance in this tournament.”

It's clear that both the U.S. and England players were determined to win, but in the end, the U.S. prevailed with a final score of 2-1. This means the U.S. women's team will be headed to the World Cup finals this Sunday, July 7. They will be facing Wednesday's winner of the semi final match between the No. 8-ranked Netherlands and No. 9 Sweden.

More like this
6 Organizations Fighting Police Brutality That You Can Support Right Now
By Syeda Khaula Saad and JR Thorpe
The 6 Best Sunglasses For Snow
By Lauren Moison
Everything You Need To Know About The Samsung Galaxy S23 Ultra’s New Camera
By Alexis Morillo
Samsung's New Phones Have Amazing Cameras & Come In 8 New Colors
By Alexis Morillo
Get Even More From Bustle — Sign Up For The Newsletter
From hair trends to relationship advice, our daily newsletter has everything you need to sound like a person who’s on TikTok, even if you aren’t.