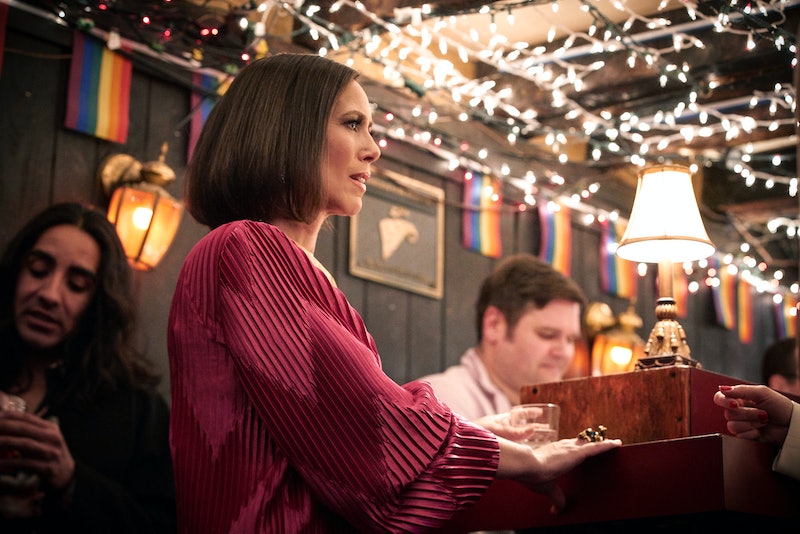 If you don't know much about Dolly Parton, there's one thing you should — she and her music transcend space, age, and time. Both are there to lift you up, and as the women of Younger learned in the Season 6 premiere, to bond women together in empowerment and understanding. Of course, there are other issues at play on Younger — a new regime change, feelings of obsolescence, unsure footing in relationships — but right now, as the cast of Younger tells Bustle, it's nothing a little Dolly Parton can't fix.

Season 5 of Younger ended with some serious shakeups, including taking Charles out as publisher of Empirical (and Millennial) and putting Kelsey in, and seriously throwing Diana Trout, queen of marketing and amazing necklaces, for a loop. She was as surprised as we were. Season 6 opens with a Page Six blind item — what 28-year-old publishing associate slept her way to the top?

Diana is seriously wounded by the news of Charles and Liza's relationship because she's a woman who has done everything correctly in her whole career, and she just. can't. seem. to hit the highest levels of employment. Hello, glass ceiling! Diana's feelings of worthlessness are palpable, and Kelsey and Liza are able to assuage Diana's feelings with a little Dolly Parton karaoke.

In an interview with Bustle, the Younger ladies spoke about how excited they were to film the "9 to 5" scene. "One of the things I love so much about the writers is that they found a way to incorporate a musical moment that felt authentic and organic and actually moved the plot forward," Sutton Foster, who plays Liza, said. "It was a fun and delightful way to bring these three women together." Miriam Shor, who plays Diana, had selfish reasons for loving the moment. "So, I’ve always wanted to be Lily Tomlin [who starred in the movie 9 To 5 with Parton] in my real life so it was fulfilling," she said. "And I get to sing with Hilary Duff and Sutton Foster, so it was like, fulfilling all my fantasies."

She adds that filming at Marie's Crisis, an "iconic" New York City institution, was "just a beautiful way to start the season. I felt like the writers were like, ‘We’re not f*cking around here, welcome to Season 6.’" Foster agrees that the whole thing was a "blast and a riot."

That may be so for the actors, but one song can't solve all the characters' problems. Though the "we're all in it together against the man" messaging of "9 to 5" brings Diana, Liza, and Kelsey together at first, they still have to go to work the next day and fight it out together. Kelsey doesn't know what she's doing as publisher, and in the premiere, she's thinking she's been singled out to take the fall for bad earnings and bad forecasts.

"She didn’t know the state of the company was as bad as it is. She’s sitting there not getting to enjoy what she loves about her job, which is books, and now she’s dealing with forecasts and budgets and all this other stuff and it’s kind of foreign to her," Hilary Duff, who plays Kelsey, told Bustle. "And she’s smart enough and she’s good enough, but unfortunately, that might not be enough."

In another corner, Diana is worried that because she is not a millennial, the namesake of her brand, there is an expiration date on her job. Ageism has been a main thematic point on Younger, but according to Shor, we're going to see it front and center this season again, this time with Diana. "Diana knows her worth, and that’s the moment of tension in anyone’s life, when you know your worth and you’re being told that you have none, it’s frustrating," she said.

It is frustrating! But instead of fighting against each other for a spot at the top, Kelsey, Liza, and Diana need to band together as women and fight for their roles. Diana knows exactly what it's like to be overlooked, and both Liza and Kelsey know what it's like to be underestimated. In Season 6, all three women of Younger need to take these feelings in order to propel themselves forward and not against each other. Dolly Parton is the first catalyst to this awakening.

"In the first episode of this season, Liza and Kelsey say to [Diana], ‘we know your worth, too,’ and I think that, as well as Dolly Parton, is what allows her to change her mind [and come back to the firm]," Shor said.

Will it be enough? Only one episode in, fans of Younger will have to wait and see. But one thing is for sure — Kelsey, Liza, and Diana are infinitely stronger together than they are apart.