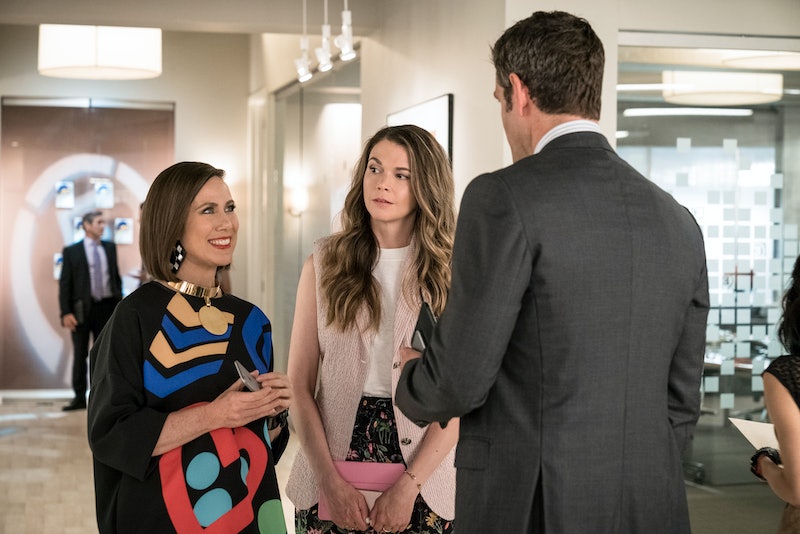 On its face, Younger is the kind of show that shouldn't have worked for five seasons. The premise — that a recently divorced 40-something woman lies about her age to get a job in publishing, falling in love on the way — is totally ludicrous and sometimes hard to believe. But that absurdity is balanced by the very relatable, evolving friendships among the female characters, along with the unwavering feminism at the series' heart. No one personifies all of these aspects of the show as well as Miriam Shor's character Diana Trout on Younger, the high powered marketing exec who hires Sutton Foster's Liza as an assistant. One part Miranda Priestly, one part Karen Walker, Diana can be a sometimes-cynical voice of reason as well as the comic relief. But as quirky as Diana might seem sometimes, Shor tells Bustle that Diana is way more than her dating misadventures and flamboyant prints and accessories.

"The danger in playing a character like Diana is that she stays like what you first see, and that has not at all been the case with the fabulous writing on the show," Shor says. And yes, sometimes Diana feels a little "out there," but who isn't? Shor adds. "The truth is that there is no behavior that is not human — you can’t be too real. So, there was never any sense of like, 'Well, this wouldn't be what a person would do” because a person would do anything. I found early on that as funny as Diana was, that there was an intelligence to her and chinks to her armor with vulnerability that shone through that were really interesting."

That being said, Shor does tend to punch her up. "I’m a ham — so I'm there to make anyone who’s in a scene with me to break and laugh, and to make the crew members laugh. That’s my job," Shor says. "But I always love subverting what the expectations of a character are by showing, you know, humanity, and I feel like the writers do that, so it's been a great line to walk, playing someone for laughs but also showing a woman of a certain age who's powerful and intelligent, and unapologetically so."

But even the powerful and intelligent encounter roadblocks at work — especially if you're a woman in charge. And Shor hopes Younger will explore "Diana feeling the pressure of being a woman of a certain age in her industry." That is, of course, the theme of the show, she reminds Bustle, but ageism and sexism are something she's experienced as an actor in real life, too.

"The first job I ever got on TV I was playing the best friend of a woman in an 'older woman, younger man' scenario — and I was essentially the same age as the younger man. I was in my twenties and he wasn’t in, you know, in middle school. I was the older woman and I was in my twenties," Shor says. "That was absurd. I like to think it’s just because I’m such an unbelievable actress, but that is not the case. It’s what Hollywood was, and still is."

Sure, she says, things are "creepingly moving forward" when it comes to telling the stories of women over 40. They might even get cast as something other than a grandmother! But there's still work to be done, and Shor gives a recent anecdote as evidence.

"I’m not going to lie to you, I was just asked to [play] the lover of a man who is 72. And in the audition I had to say, ‘Is this a plot point, that she is significantly younger than him? Is this pertaining to the plot?’ And the answer was no. And I was like, 'then no.' It’s not that I don’t think that a man in his seventies could have a girlfriend in her forties... but I'm just saying — are there women in their fifties and [sixties and] seventies who are also auditioning for this role?" The answer was likely no, though Shor maintains that it's entirely possible there was, in that smirking way that only Diana can suggest something.

It's incidents like this one, especially in light of the #MeToo movement, that prompted Shor to re-examine her position on set and her role in the workplace. She wanted more agency, and had seen friends and other actors from TV shows hop into the director's chair. But very few of them were women. She realized she had been thinking that she wasn't totally prepared or worthy of taking on a leadership role as a director, even for one episode.

"You know how women always feel like they have to be 100 percent prepared and [men] and learn as they go?" she says. "To me, [that's] just a smarter way to live life, because you’re never going to be 100 percent prepared." Which is why she finally took the leap and asked creator and showrunner Darren Star if she could try her hand at directing an episode. Luckily, he was all about it. But her initial hesitation underscores how difficult it can be as a woman to feel worthy enough to ask for what you want.

"[Not asking for things] has to do with the story that society tells you, but it also has to do with the story that you tell yourself. We're responsible for changing the narratives of society and changing them in ourselves," Shor adds. Although she had some first-day directing jitters, Shor realized that with more than 20 years in the business, and most of them on TV sets, she had a "lot more experience than [she] realized."

"On top of that, I’m like an A student, so I was immediately studying and working.... Of course, I know the show intimately in a way that, you know, most directors coming in to direct the show, couldn't know," she adds.

So don't expect Shor to start slowing down now. In addition to playing Diana on Younger, Shor also had a key recurring role on the final season of The Americans (which you should definitely go back and watch if you missed it) this year. And there might even be some more directing credits in her future.

"It’s the premise of the show that women of a certain age are discarded," Shor says. "I'm in my 40s and I’m not done. I'm not ready to be out out to pasture." Nor should anyone even dare to consider it.

More like this
Sandra Bullock, Girlboss Extraordinaire
By Matt Harkins & Viviana Olen
The 'Hocus Pocus' Sequel Finally Has A Release Date & It Makes Total Sense
By Shannon Barbour and Radhika Menon
Pete Davidson & Kate McKinnon Are Part Of A Reported Major SNL Cast Shakeup
By Brad Witter
Billie Piper Just Confirmed 'I Hate Suzie’s Festive Return
By Kayla Blanton and Shahed Ezaydi
Get Even More From Bustle — Sign Up For The Newsletter