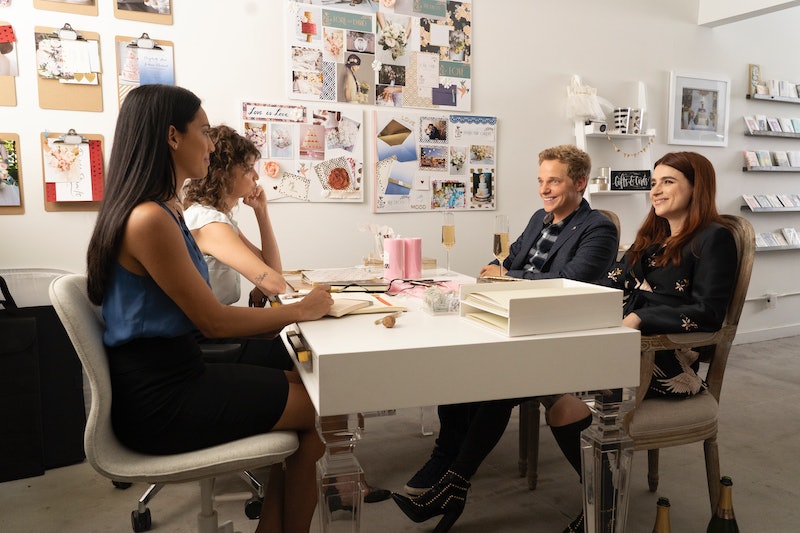 Spoilers ahead for the You're The Worst Season 5 Premiere. New (or just forgetful) fans were probably a little confused by You're The Worst's Season 5 premiere, since Jimmy and Gretchen don’t appear until, oh, halfway through the episode. Did the show's main characters just up and leave? Well, not exactly — they're just up to their old tricks.

After getting (re-) engaged in the Season 4 finale, Jimmy and Gretchen are now visiting wedding planners, where they've been telling elaborate fake stories about how they met. Here, they recreate a '90s rom-com complete with a video store clerk, a movie lover who becomes a famous filmmaker, one night of passion, and a Notting Hill-esque man-interrupts-famous-woman's-press-conference ending. After many years apart, and a will-they, won't-they arc to match, the clerk and movie buff reunite and ride off into the sunset — because they're soulmates, obviously! It's beautiful! It's poetic! It's fate! It's exactly the kind of love story that romantics will cheer for and tear up after hearing.

Of course, Jimmy and Gretchen's actual love story is… not really like that. Theirs, as Jimmy says, is uglier. Coarser. Rawer. It doesn't make it any less real (in fact, it arguably makes it more real), but it's far less palatable than something torn from Bridget Jones' Diary. Gretchen's depression, Jimmy abandoning her, and all of their self-sabotaging is far from the stuff of fairy tales, but they do care for and have come to depend on each other. Yes, they're going the traditional route with marriage (or at least, they're headed that way for now), but they're still railing against convention, poking fun at relationship cliches, and enjoying the hell out of messing with everyone around them (even though the wedding planners definitely seem to be onto their ruse).

Much of Season 5 is going to focus on whether or not Gretchen and Jimmy will actually make it down the aisle, and at this point, it's anybody's guess. The number of moments Jimmy and Gretchen have played chicken with each other's hearts almost equate the ones in which they've been truly vulnerable with one other. As they've shown time and time again, they're afraid to open up completely, to take the dive, to fully fall in love. Yes, they're engaged, but this faux love story they're peddling seems like one more step in trying to slow the whole process down — or at least deflect from how big of a commitment they're making.

To Gretchen and Jimmy, it seems, love is black and white — it's either a rom-com tale or their dark, imperfect love story. But that's not the case, is it? All relationships are different, and there's no one right way to be together. Hopefully, by the end of Season 5 (which will be the end of the series as a whole), Gretchen and Jimmy can embrace the bad and good in their relationship and be honest about what a huge milestone this is without making it a joke. Whether they really get married may depend on it.

More like this
The Best 'Grey's Anatomy' Intern Moments, From MAGIC to Glasses
By Grace Wehniainen
Shonda Rhimes' Net Worth Makes Her One Of The Wealthiest People In TV History
By Hugh McIntyre
'The Rings Of Power' Episode 7 Will Feature An “Unlikely Pairing Of Characters”
By Grace Wehniainen
'Firefly Lane' Season 2 Will Be The Show's Last — But There's A Twist
By K.W. Colyard and Grace Wehniainen
Get Even More From Bustle — Sign Up For The Newsletter