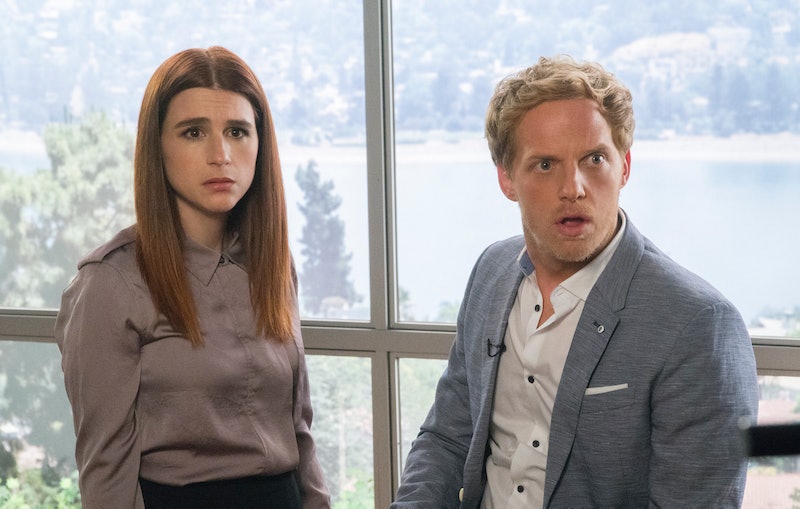 It’s a valid question, considering that You’re The Worst is one of the most watchable shows on television nowadays. The show may be about a band of unlovable, unlucky-in-love misfits, but they get plenty of love from critics and fans alike. Well, as announced the very day of the season finale in a press release, You're The Worst will indeed come back for a fifth and final (ack!) season in 2018. The network didn't announce when exactly in 2018 the series will return, but nearly a year usually goes by between You're The Worst seasons. Since this one premiered in September, it's likely Season 5 will drop in late summer.

Of the renewal, Stephen Falk, the show's creator, said in the release, "Making You’re The Worst has been an incredible experience and FX Networks have been dream partners. I am thankful to have the opportunity to be thoroughly judged whether or not we ‘stick the landing’ — which is a thing people say now that stupid Breaking Bad had to end so damn perfectly.” It's bittersweet news, but still nice to know we'll get one more season!

And so, in honor of You’re The Worst’s cutting-edge storylines, here’s a roundup of some groundbreaking storylines that the show has to carry through in its final lap.

In the worst cases, when a character on a television show is depressed, it’s just a thing that happens, and they take some pills or go to a therapist and it’s done. Cured. But in Gretchen’s case, her depression is so severe and debilitating that when she's in her lowest state, she can’t get out of bed. She can’t eat or work or do anything, and something inside of her is broken. Her Season 2 storyline gave a very real look at what depression can do to people’s lives.

The stigma around mental illness is real, and Aya Cash, who plays Gretchen, told Bustle in a 2016 interview that comedy is the best way to introduce people to a hard topic. "I'm so overwhelmed by how horrible things are in the world, so you start to almost become desensitized, and comedy is a way to talk about those issues without taking a sledgehammer to your head. It takes you out of it, so you can feel removed from it in order to accept the information because it's coming through a different channel.” Gretchen has had to work hard to manage her illness, and it's affected everything: her friendships, her job, and her relationship with Jimmy. That’s real life, folks.

Edgar was introduced as the happy-go-lucky portion of You’re The Worst pie chart, but he’s had some pretty dark things happen to him. He grew up poor, he enlisted into the armed forces, he went to Iraq, he came back to the States, he was homeless, and then he got addicted to heroin. No Cinderella fairy tale here. And Edgar has made something of himself, but he still deals everyday with the complexities of being a veteran — the PTSD, the problems in dealing with the VA, the stigma of mental illness, and the problem of homelessness that affects many vets. Some on the show are uncomfortable with Edgar telling stories about the bad things that have happened to him — and that’s the point. These things are hard to hear, but you have to face the truths before you can fix the problems.

Lindsay started You’re The Worst as a ditzy housewife friend of Gretchen, and let’s be real — she is a mess. All of the characters are, but Lindsay is both mindlessly ignorant and yet very sure of herself. It’s a dangerous combination. That said, Lindsay has come so far since the beginning — she’s divorced her dumb husband, decided not to have a baby she wasn’t ready for, and found a job that she really likes. For the first time in her life, Lindsay is beholden to no one but herself, and she doesn’t know what to do with it! But that’s the beauty of it — Lindsay, who has been pigeonholed for so long as dumb and slutty, is just the opposite. She’s smart because she finally has the agency to do what she wants. While she’s not sure what that is, that’s just fine. Lindsay will figure it out. Any other television show would have painted her off as the promiscuous pal, but on You’re The Worst, Lindsay gets a say.

With one more season on tap, You’re The Worst will be wrapping things up soon... as much as life itself can be wrapped up, that is.