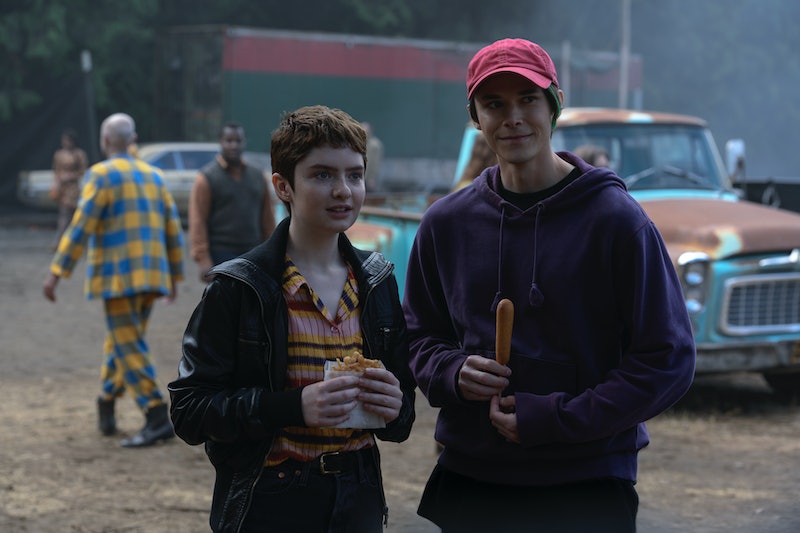 Spoilers ahead for Chilling Adventures of Sabrina Part 3. If self-aware people make the best or most grounded partners, then Theo (Lachlan Watson) has been setting himself up as prime relationship material since the very beginning of Chilling Adventures of Sabrina. While his friends got swept up in messy love triangles that only led to tears and heartbreak, Theo spent the last two seasons figuring out how to be happy all on his own — a thing that tends to happen when you're the perennial third or fifth wheel, and well, all of your friends are dating each other.

There's nothing wrong with being the single friend, but there were times when Theo's lack of romance in earlier seasons felt like the writers not quite knowing what to do with him beyond his exploration of gender identity. Part 3 feels like a course correction: with the arrival of new kid Robin (Jonathan Whitesell), a speedy hobgoblin and a (former) member of Carcosa's traveling coven of pagan witches, no longer is Theo's story about enduring bullying or figuring out how to present himself. Instead, it's about finding someone who loves and accepts him as he is. As star Lachlan Watson tells Bustle on the set of CAOS Part 4, it feels like "sweet, sweet justice."

"It's a big thumbing my nose at all the third wheel scenes I had to do for two years," Watson jokes. "Now it's [me and Jonathan] making out in a chair while everyone else is unsure of what to do with their hands."

Theo, who spent all this time becoming comfortable in his own skin and gaining acceptance from his peers and family, is a pretty perfect partner for Robin, who was adopted by the pagan coven but never felt truly comfortable there. It's no wonder, considering Carcosa's pagans are mercilessly evil, and the shy and soft-spoken Robin isn't.

"Because he's been traveling for so long, he's never really had his own roots and he never really had the ability to make true connections," Whitesell explains of Robin. "So now, there's an opportunity to really just settle in, be comfortable, and be around people [who will accept him]."

Their relationship also comes without the same built-in baggage of many of the show's other romances. Sabrina's, for example, are full of angst because she's constantly being pulled between the mortal and witch worlds, while Roz's relationship is still haunted by the chance that Harvey may still have feelings for Sabrina, or vice versa. Ambrose and Prudence seemed like a solid new couple until Father Blackwood created a possibly insurmountable rift between the two; it's too early to tell how Zelda's relationship with Mambo Marie will go; and Hilda nearly killed Dr. Cee, bringing into question if it's really safe for him to be with her. Robin may be a magical creature with pointy ears, but all things considered, Robin and Theo actually have one of the most uncomplicated and stable relationships on the show.

Ultimately, Watson says that while "Theo is still a hot-headed little jerk face," the more gentle Robin "helps balance that a little bit." With CAOS already confirmed for Part 4, Theo and Robin will have plenty of time to get to know each other better and further explore their connection. The only question left: do they have a ship name yet?