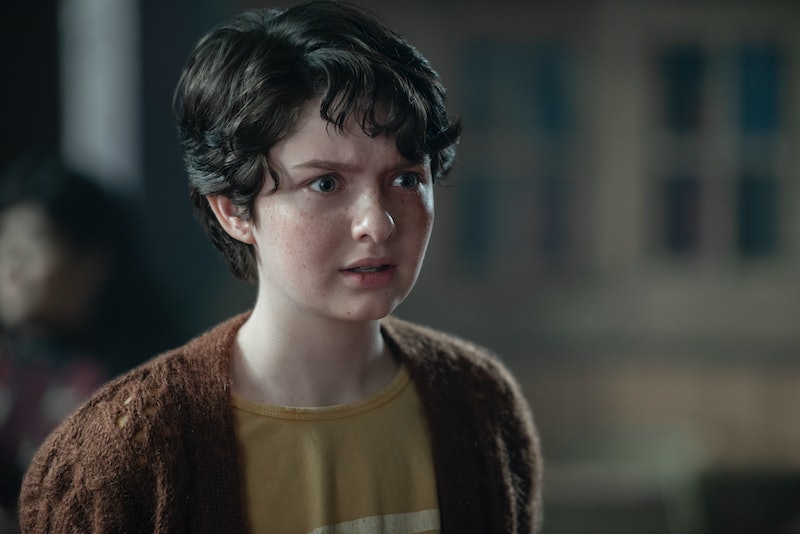 Before taking the role of Susie Putnam on Netflix's Chilling Adventures Of Sabrina, Lachlan Watson had a conversation with creator Roberto Aguirre-Sacasa about the character's gender identity. In the original script, Sabrina's friend Susie identified as a transgender man and came out in the first few episodes of the Netflix series, but Watson, who identifies as gender non-binary and prefers they/them/their pronouns, was concerned that was too soon.

They were concerned it wasn't an honest representation of what many genderqueer people experience. And with so few trans and even fewer non-binary characters on TV, it was important to them that they were as accurate as possible in their portrayal of Susie's journey.

"I may have influenced the writers to hold off," Watson admits over the phone of Susie's coming out. "I talk so much about myself and my identity as a non-binary person and I think they listened, and if anything it helped them understand that labels aren’t everything. Susie is on an ongoing queer journey, just like myself."

By the end of the first season of Chilling Adventures of Sabrina, Susie still doesn't completely understand who they are. They don't yet have the language to identify themselves, but they're beginning to find power in who they're becoming. Watson thinks that confusion and uncertainty is an important aspect of the character's journey towards self acceptance. After all, it was a big part of their own.

While growing up in North Carolina, the actor, who was born Riley Watson, "identified fully and completely as a trans male just because I thought that was my only option: 'I don’t feel like a woman so I guess I’ll be a man.'" But it never felt totally right for Watson, who started wearing baggy clothes and stopped wearing pink to "present as male" as a kid. Yet, they say, "I was still so uncomfortable with myself and my body. I was like, 'I’m presenting as trans, why am I still so unhappy?'"

Watson refers to their own genderqueer journey as "strange" because it didn't follow the common trajectory of the trans men that they had read about. After Watson was given a prescription for testosterone, they started questioning whether transitioning was right for them. "I had read the five pages of irreversible changes and the changes to your mental state" associated with taking the hormone, Watson says. "It was going to turn me into a different person and that scared me."

Watson never took the testosterone, but instead decided to have top surgery, a procedure that removes breast tissue to create a flatter chest. "I had almost every queer or straight person in my life go, 'Wait, wait, wait, you didn’t want to do testosterone, why are you doing top surgery? That’s not how this works. You're doing this wrong,'" they say.

"It is still seen as rebellion, as anarchy against the system to be anything other than the perfect gender binary person."

But Watson doesn't regret that decision and what it taught them. "You don’t have to label yourself so quickly, you don’t have to just be one thing or another," Watson says. "Just like Sabrina choosing her own path of light and dark, you are allowed to forge your own path and you can do it brilliantly and independently."

Going against society's norms is never easy, but it's even harder when there's someone in the White House who is threatening to erase you. "I live in this happy little gay bubble and sometimes that bubble gets burst," Watson says of reports that President Trump is looking to legally define gender as "a biological, immutable condition determined by genitalia at birth." "And sometimes I look outside and realize we haven’t made the progress that I think we have."

Watson admits there is added pressure in playing a queer TV character in this political climate. But being able to honestly tell Susie's story, which has a lot in common with their own, always made it feel worth it. "It is still seen as rebellion, as anarchy against the system to be anything other than the perfect gender binary person," Watson says. "And as frustrating and just disheartening as it has been [with Trump in office], at the same time it's all the more empowering. It gives me all the more reason to be doing what I’m doing."

What Watson is doing is showing the audience Susie's queer journey in real time. "It's not as linear as the world sort of believes it is. It’s not just jumping to Point A to Point B and then stopping," Watson says. "There really is no Point B, you just leap off Point A headfirst and just dive through the weird world of gender until you stop."

Chilling Adventures of Sabrina wants the audience to take that leap right along with Susie as they deal not only with their identity, but a book-banning principal, a demon-possessed uncle, and high school bullies, something Watson says they never personally dealt with. "I mean I dealt with my fair share of inner bullies, but having it be physically manifested is traumatic and it’s incredibly stressful," they say. "It's really opened my eyes to what a struggle it is to be queer every day and literally come out of your house every morning."

For Watson, playing Susie was always about representing an honest queer experience that could help others better understand what it's like to be gender non-binary, whether they're queer or not. "I’ve been able to discover what it really means to stand up for yourself and to be yourself unapologetically and it’s something I’ve needed a reminder of," Watson says. "Just telling that story has meant a lot to me. I think it would have meant a lot to little young confused me, too."

Now, Watson hopes Susie will mean something to other confused queer kids who can watch Chilling Adventures of Sabrina and know they're not alone.