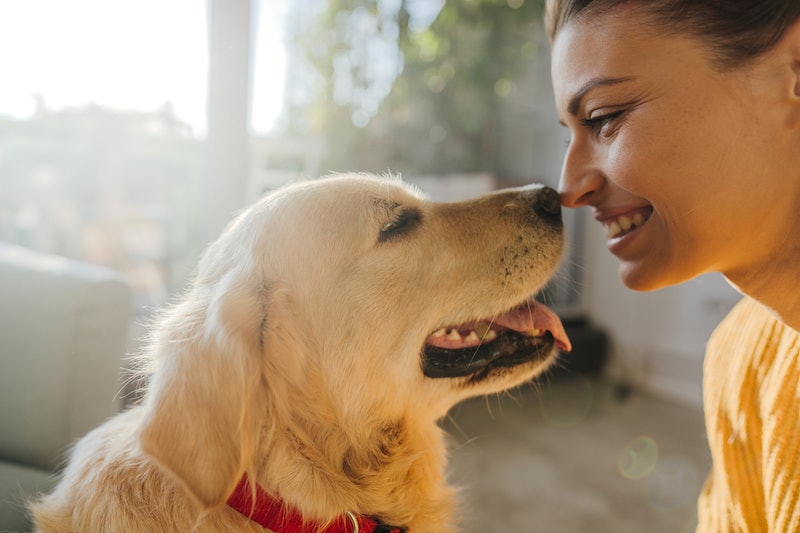 I thought my dog was around 28 in human years. After all, everyone knows that calculation trick. Take your dog's age, multiply it by seven, and voilà. There you have it. But a group of researchers have used a more scientific basis to come up with a new calculation. And it makes way more sense. So here's how to work out your dog's actual age in human years.

The original calculation wasn't based on much science. Instead, it just divided human lifespan by a typical dog's lifespan, reports New Scientist. But, in a new paper that is still awaiting peer review, a team of scientists have delved deeper into canine biology.

Armed with the knowledge that marks on our DNA alter with age, per the BBC, researchers carried out a genetic analysis of dogs, comparing the results with chemical gene changes that occur in humans. These changes, known as methylomes, were matched up, allowing for a more accurate picture of each dog's age.

Only Labrador Retrievers were studied, so it's not yet clear if this new calculation can be applied to all dog breeds. But for the curious among you, here's how it works. The calc looks like this: 16 x ln(dog's age) + 31.

But it's really not that complicated. First, you take your dog's age. Then you work out this number's logarithm using a scientific calculator or this handy site. (If using the site, simply enter your dog's age and hit 'calculate'.) Next, take that figure and multiply it by 16. Finally, add on 31 to reveal your canine friend's supposed human age.

Surprisingly, the study found that an eight-week-old puppy is comparable to a nine-month-old baby, and that a two-year-old Labrador is almost reaching middle age in human years. But their ageing process then mysteriously slows, allowing them to progress the equivalent of 20 human years in a decade. So although a two-year-old dog is 42 years old in human terms, a 10-year-old dog is only in its late sixties.

I immediately panicked when I realised that my four-year-old pal could be around 53 in human years. But if his ageing slows down in the same way as Labradors', everything falls into place. Dogs may seem like they die young, but, inside, they are probably the same as an elderly person. A little consolation for when their time eventually comes.