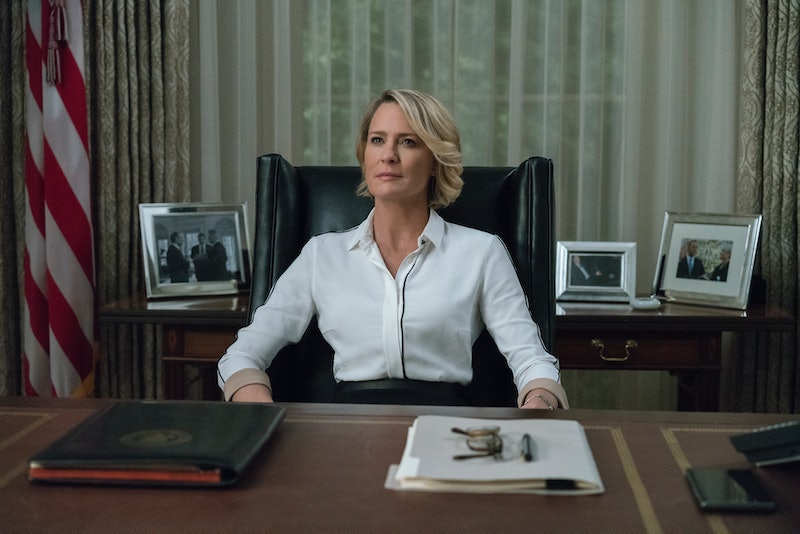 This week, real-life scandal eclipsed the kind usually seen on Netflix's House of Cards. Shortly after actor Anthony Rapp made sexual misconduct allegations against the show's star, Kevin Spacey, telling BuzzFeed that Spacey made unwanted sexual advances toward him when he was 14 and Spacey was 26, Netflix was quick to announce that House of Cards will end after Season 6. While the company says the series' end has been in the works since this summer, the announcement was an added punch in the gut to Spacey, whose response to Rapp's claims was criticized for what some said was an attempt to deflect the allegations of harassment with a long-awaited public acknowledgement of his sexuality.

But while House of Cards fans may be dismayed about the fate of the first-ever Netflix series and the scandal surrounding it, they shouldn't lose all hope: Variety reports that Netflix and production company Media Rights Capital are in the early stages of creating at least one spinoff. Of the three spinoff ideas reportedly under consideration, the only one that there are details available on is a series starring Frank's chief of staff Doug Stamper (Michael Kelly). While a series about Doug continuing his creepy and conniving ways in Washington would be interesting enough, there's no character who has earned the privilege of having her own series quite as much as Robin Wright's Claire Underwood.

Although House Of Cards is arguably about both of the Underwoods, it started as Frank's show — after all, he was the one regularly addressing the audience and breaking the fourth wall. But that role stopped being relegated to only Frank in the Season 4 finale, when Claire looked directly at the camera alongside him. Then, in Season 5, Claire spoke to the audience alone.

But it's not just her interactions with the audience that prove Claire is eclipsing Frank on House of Cards. After Frank resigned in Season 5, Claire became the president. With her new power, she went against Frank's orders to pardon him and Doug and purposely ignored Frank's angry phone call. So the natural progression for Season 6 would be for Claire to assume the position Frank had in Season 1 — to be the true lead character. After all, she said as much at the end of Season 5 when she looked at the camera and proclaimed, "My turn."

Giving Claire her due as House of Cards' lead character in Season 6 would certainly set her up for a spinoff, but there are also logistics to consider. Given the Spacey scandal, Netflix would likely want to keep Frank out of any future shows, which means a bigger change in Claire's life would have to occur to make a solo show viable. (And plus, if she just swapped places with Frank, a Claire spinoff would feel like another season of House Of Cards.) Perhaps the easiest way to do this would be to kill off Frank. Coming off of the recent sexual abuse allegations, this may seem like a hit at Spacey's character, but it's probably the cleanest way to justify Claire going it alone.

Frank's death would present a number of interesting challenges for Claire. She'd have to grapple with loss while establishing a life separate from him. Although the faulty legacy they built will inevitably continue to follow her, it would be fascinating to see Claire create ties completely outside of Frank's sphere of influence. And as Frank's time as president was mostly focused on preserving power, Claire could make meaningful progress as the first woman president. She already established her foreign affairs skills in House of Cards, so what about her domestic policies? Rather than be consumed by the games that go along with maintaining power, Claire could actually serve the nation (what a novel idea!). Since there's the chance that she could be elected for another eight years after she finishes Frank's term, there could be an entire President Claire Underwood era of the nation's history.

Another way to differentiate between a Claire spinoff and House of Cards would be to have the new series pick up after her time as president. Her career path has drastically changed over the course of House of Cards; she went from running a non-governmental organization in Season 1 to becoming president in Season 5. In the right showrunner's hands, what Claire does after the presidency could be fascinating to watch, especially since it's not as commonly explored TV territory as a character's time in the White House is (though we should note that Veep had great success with this in Season 6).

No matter what point in her life a potential Claire spinoff would start, the key to its success would be in the show's declaration of her worth. Claire has spent enough time on House of Cards proving her mettle, and she finally reached the pinnacle of power as the president of the United States. In a Claire series, her dominance would have to be firmly established with the other characters respecting and (because she is Claire Underwood) fearing her.

You may think a Claire spinoff would give you Underwood fatigue, but Claire has always been the far more mysterious and alluring character of the couple. As she said herself, she doesn't make her innermost thoughts known to the audience as Frank does, so there's still plenty of room to explore what makes her tick. And while Frank often used Claire as a prop to elevate himself, without him bringing her down, she could be limitless.