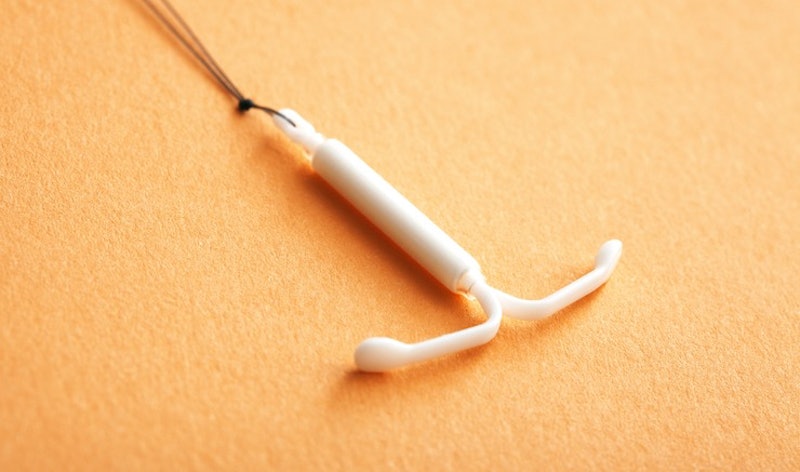 After the election, there was a lot of talk (and a surge in Google searches) about getting an IUD, or another long-term, reversible birth controls in case of the Affordable Care Act being repealed. But a recent spike in IUD appointments across 85,000 providers, along with a 900 percent increase in demand in IUDs at Planned Parenthood, shows that women are taking the warning to heart.

New data from athenahealth shows that, after the election, there was a 19 percent increase in appointments related to IUDs. That's a huge jump. And they looked a million visits over the whole network of 85,000 providers, so it's a really strong sample.

It shows just how frightened women are. And, now that Trump is in office and moves have already been made to repeal Obamacare, it's clear they had good reason to be. Birth control can be prohibitively expensive and, as it looks as though abortion may no longer be covered by insurance thanks to the HR-7 bill, it feels like our contraceptive (and just basic) rights are being attacked from all sides.

But why are women looking at the IUD specifically? Well, it's a great birth control option for a lot of women. "Even before the Trump disaster, an IUD has been for many women the best method of contraception in terms of safety, reversibility, and efficacy," Dr. Lauren F. Streicher, MD, Clinical Associate Professor of Obstetrics and Gynecology, Feinberg School of Medicine, Northwestern Memorial Hospital, tells Bustle. "With possible repeal of Affordable Care Act, many women will not have insurance and/or will not have contraception coverage. By getting an IUD now, they will be protected for 3-10 years depending on which one they choose."

And it's not just the imminent repeal of Obamacare that will affect your birth control choices. "Possible defunding of Planned Parenthood will make access even more limited," Dr. Streicher says. "If Roe is overturned, not only will abortion become illegal, but many types of birth control as well (such as IUD’s) since far right extremists such as Mike Pence put their own personal beliefs above science."

It makes a lot of sense. But it's also important to make sure it's the right choice for you — there are other long term, reversible birth control options. I used to have an IUD and, at the time, it was right for me. But I definitely had some negative side effects (namely my vagina pushing the damn thing out of my body after two years). I'm not against IUDs, in fact I really liked it when it worked, but make sure to do your research and see what will work best for you. Though, with the political climate, it's worth doing it fast.

What's even scarier is that we're all freaking out over birth control (and rightly so), but there's so much at risk. Dr. Streicher explains some of the worries.

A Lack Of Affordability Can Hit Millennial Women Hard

Healthcare is expensive. Healthcare for women can be really expensive. And with Millennials lagging behind previous generations in terms of salary and quality of life, young women have a lot to lose. "So many aspects of this are so frightening, and horrifying, and potentially detrimental to women," Streicher tells Bustle. "Most of young women's healthcare needs in their twenties involve contraception, STI screenings, and well-woman care, and we have a double whammy of not only losing congress, but with Planned Parenthood likely to become defunded, these women are going to be left with very few options — and certainly very few affordable options." Without affordable options, we can end up with a lot more unwanted children or dodgy medical care, both harrowing options.

We Could See A Lot More Unplanned Pregnancies

Speaking of unwanted children, we often underestimate the amount of unplanned pregnancies in our society— and how devastating the effects can be. "If you look at the number of unplanned pregnancies in this country — and in general, 50 percent of pregnancies that occur are are unplanned — for the first time in the last couple of years, we saw that number start to go down significantly," Streicher says. "It wasn't going down because people were having less sex — it was going down because of greater access to contraception, particularly long-acting reversible contraception (LARC), like IUDS. It doesn't take a genius to predict if there's no longer access to affordable LARC and other contraception, we're going to start to see those unplanned pregnancy rates go up." It's sad to see that the progress we've finally managed looks like it will be undone.

But Cancer Screenings, STI Tests, And More Are Also At Risk

It's time to take a step back and look at the bigger picture — because unfortunately there's more at stake. Streicher reminds, "We're focusing on contraception and pregnancy prevention, which is appropriate, but don't forget that women rely on their insurance and Planned Parenthood for STI screening and for cancer screening, like pap tests. It is no small thing to no longer have those things be accessible to millions of women."

The best thing you can do is protect yourself — that means education and action. Do your research and decide if joining that spike of IUD appointments is right for you. You need to take care of yourself, because your president sure isn't going to.

More like this
How Getting An Abortion Has Changed From The ’60s Through Today
By Amanda Chatel
Are Gemini & Leo Compatible In A Relationship?
By Kristine Fellizar
34 Quotes That'll Inspire You On Juneteenth & Beyond
By Syeda Khaula Saad and Siena Gagliano
35 Sexy Texts To Send Your Partner
By Griffin Wynne and Carolyn Steber
Get Even More From Bustle — Sign Up For The Newsletter